I was looking at Valazquez

And he was looking right back at me. So I doodled him. If he bothered to doodle me I bet it looked pretty good, although maybe not; he didn't seem willing to show me. 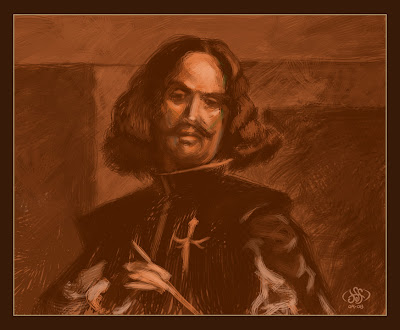 While working on a dull project at my place of employment I hacked out this quick study during short breaks, as a little reward for myself. I need some propping up now and again.
j
at 9/26/2008 11:16:00 AM 1 comment:

I've been too busy with work and with chores to keep the blog going regularly, but I have been drawing when I can. Here are a few things I've doodled and colored in the past couple of weeks. The goal was to come up with characters that might look good in a comic book or a video game: 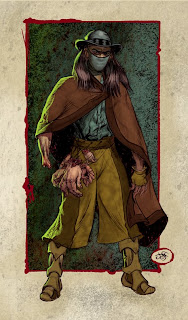 This one was fun. I have a story for this ghastly character but it's a little long and growing longer, so rather than wait six months for me to get around to typing it here, just look at the picture and come up with your own! (Really, that's what I did-- I had no idea what he was all about when I started drawing him.)
n
at 9/20/2008 11:16:00 AM 1 comment:

Email ThisBlogThis!Share to TwitterShare to FacebookShare to Pinterest
Labels: Character Design, Personal Work
This lady, as of yet, has no name, no story. Pardon the peculiar torso-twist and the weird cape. 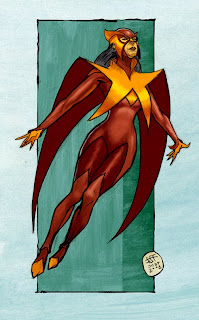 Email ThisBlogThis!Share to TwitterShare to FacebookShare to Pinterest
Labels: Character Design, Personal Work
A long time ago I drew the first version of this lady; she was skinnier and she had only one over-sized robotic arm. She looked clunky, but I was fond of her. I sketched her a few times and even went so far as to make some comic-pages with her in there, along with an old-lady super-hero (an octogenarian with a pudgy body and absolutely RIPPED arms.) 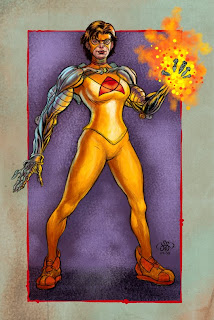 Email ThisBlogThis!Share to TwitterShare to FacebookShare to Pinterest
Labels: Character Design, Personal Work
Here, I intentionally tried to design a character that I thought would fit right into a Jean "Moebius" Giraud sci-fi comic. I've just gotten ahold of "The Incal" by Jodorowsky and Moebius, published by Marvel/Epic in the 80s, and I'm seeing everything through Giraud-colored glasses. Beautiful stuff!
...My first drawings of this fellow had a livelier, more colorful outfit, but I thought his striped pants, checkerboard vest and ruffled cuffs were indications I was going too far. Now, I think differently. I might fix him later. 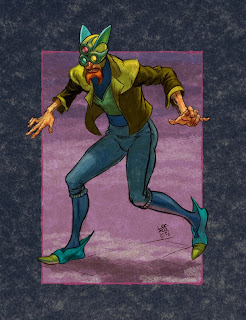 I had a name and a story for this chap, but as I was finishing up the coloring on him it occurred to me to make his three eyes red, yellow, blue. Ooh. That changes things. Now he projects images in... subtractive color? That SHOULD be red, blue and green for additive color, right? Color theory was so long ago. Whatever; it just means that my previous notions about this fellow are whacked.