I don't know anything about him. Only his name. He got on the bus, moved down the aisle and grabbed onto one of the metal poles across from me.

I glanced at him a couple of times because he was twtiching head to the music he was listening to and moving his lips slightly. During a couple of large exhales he whispered a word or two and I was trying to guess what song was playing, but I never quite got it.

His phone beeped and when he answered he said, "Yeah? Bolt here. Hm? Clarence Bolt. Who is this? Michael? Michael who? No." Then he listened for a short time. "No!" He said with anger. "I'm Clarence Hawley BOLT! I don't know anyone named Lisa. BYE!"

He shoved his phone back into his pocket. The bus slowed to a halt and he pulled himself along the poles to the front and jumped out. I haven't seen him since.

Excerpted from "Clarence Hawley Bolt doesn't know anyone named Lisa" by Lisa Fretatta-Clamm, copyright 2004 by the Lisa Fratatta-Clamm estate.
at 1/31/2011 09:38:00 AM No comments: 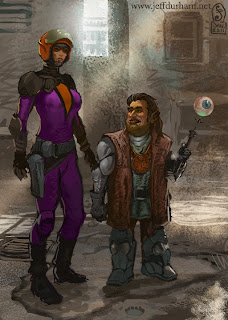 These two have been in the works for weeks, but I feel like I didn't get to spend consistent, thoughtful time with them.

This was a case where I would drop in for twenty minutes -- draw, erase, re-draw -- and then scoot along to work or what have you. I never had a stretch of time where a story developed as I drew, and they never acquired a sense of character to me; that's not normal. Characters usually take on a life and a history as my mind wanders over them. But these two? I feel like I don't really know them.

Consequently, I never got to the moment where I had the sense that that they were on the verge of being finished. So, this morn I polished them up a little bit and spent an hour or so doggedly hacking in a background. The characters don't seem to belong to each other, and the background doesn't belong to either of them. Weird.

Maybe if I give them names they will blossom into real imaginary characters. Let's see... Fannie Spencer and Efram Ruglump and his floating eye. Nah. Not working.

I'm calling it "done" because I want it out of the way. Done!

Here's a jpeg I unearthed on an old archive CD. This is something I did back in the early-90s. It's a gouache painting on the cover of a small sketchbook, 3x5 I'd guess. 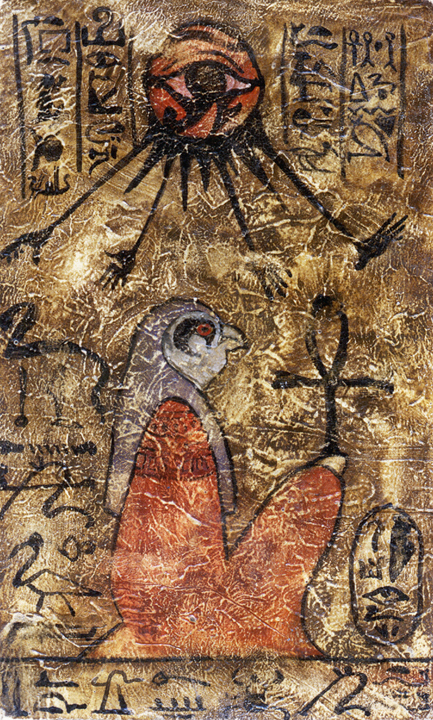 As I recall, I referenced hieroglyphs from a book about King Tut and incorporated them.

I haven't seen the real-life sketchbook in years! I wonder if I still have it. Probably not. I occasionally conduct art-purges and old sketchbooks with bad drawings in them don't fare well. Wish I had this little piece, tho!

If anyone ever sees it, snag it for me, would you? I'll meet you and buy you a coffee and a large donut or pastry of your choice. Don't look inside the book, please; I bet there are some embarrassingly awful scribbles on those pages. 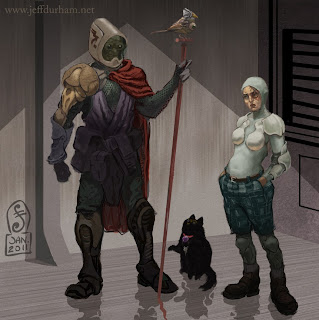 I didn't get around to finishing the guy on the left but I did slap together a quickie background so that they're not just hovering in space. I intended to do quick drawings but these lingered for about a week and I fussed over the gal way too much-- she underwent two or three full-length transformations.

Shoulda: Given the girl a skateboard; made the little bird a big bird because I was really digging drawing that! 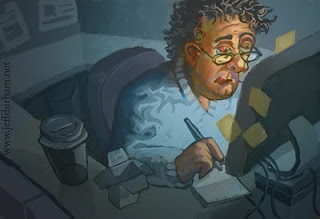 A quick doodle that I labored over longer than necessary. I was aiming for something a little more abstract. The face was the first thing I did, and I was going to ignore realism and perspective for the rest of it, but I retreated to the comfort of "the rules." Coward. 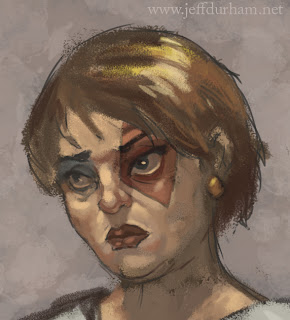 This little blog project is almost four years old; that's a long time! And still, I have energy for it, I am interested in it and I enjoy it.

There are changes I want to make to this habit, in hopes of improving my output with an eye toward changing my career. That's going to be a post I'll give more thought and attention to soon. 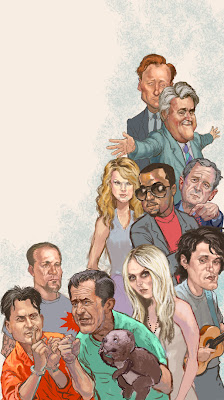 Caricature is tough; fun, but tough. I don't have a lot of confidence in my caricature skills. I grew up admiring the MAD magazine work of Jack Davis and Mort Drucker but I haven't reached a point where I'm comfortable trying to do what they do so masterfully.

Working at a newspaper, the opportunity for celebrity caricature comes up from time to time, but not often enough to get really good at it. When they ask me to this kind of thing, I whine a little, I shuffle my feet and say that I'm not sure I can do it, but I always do it because, secretly, I want to. I like to pretend I'm Mort Drucker for a day.

This assignment was fraught with danger, not only due to the number of caricatures, but because the column was about a wide array of celebrity misdeeds, and some of those misdeeds were WAY too salacious to represent visually.

The newspaper is not MAD, so even the wink and the pinch and the leer are considered edgy. I've done a few slightly-over-the-line works in the past and it's just not worth the worry and the hassle to press those buttons too often. In my decade of creating artwork for the paper, the ratio of complaints to compliments is 100 to none.* Nobody gets in touch with the paper unless they're ticked off. I'm afraid the illustration comes across as a little dull, but that's on purpose this time. I let the writer humorously describe all the naughty bits without any obvious imagery to get in the way.

Tony Hicks wrote the story and his work is always a natural fit for my cartoony style; he has a nice and easy comedic touch, so I think they sit well together on the page.

Celebrity key: Conan and Jay up top. Then, Taylor Swift, Kanye West and Prez W. Left to right across the bottom is Charlie Sheen, Jesse James, Mel Gibson (and friend), Taylor Momsen and John Mayer. I'm a bit of a pop-culture ignoramus post-1990 so I've never even heard of those last two. Maybe a lack of familiarity is why they don't seem to look like them... that's my excuse.

Otherwise, I think I've done okay, but my feeling is I've drawn a few likenesses rather than true caricatures... oh, forget that! I'm stopping here. That's a whole 'nother discussion.
The End
*Exaggeration. I've gotten, I believe, two compliments from the readers, but I couldn't prove it.

I'm revisiting and organizing my 2010 files at work, and guess what? Found a brain! Proof that I have one, at last. It's in a folder, on a hard drive, but I have one nonetheless.

This was done for a graphic I made back in October. I calmed down the color for publication, just because I didn't want to distract from the message of the graphic, but this is how I like it best.


Resolutions for this year:
I'm going to jolt my freelance career to life. I hope that making art can become the most important part of what I do. I want to make it the most important part of my working life.
More art in my spare time. (I have a couple of comics ideas I'd like to get going on.)
I will read more books and less internet.
at 1/03/2011 02:47:00 PM No comments: