Sunday Morn, On Coffee and Geeking Out

The head on the left was a conscious attempt at Sherlock Holmes. "Don't make him look like Basil Rathbone," said I, to myself, knowing full well how susceptible I am to the gravity of Rathbone as Holmes. "Jeremy Brett is also a danger," I whispered as I shaped the brow. This useless inner dialogue resulted in the loss of the hawk-like nose and though he does not resemble Rathbone nor Brett, neither does he look like my idea of Mycroft's less intelligent, but more energetic, brother. He's just some guy, I suppose.

...On the right, the Queen Bee, my attempt at a portrait of the Ditko character from Pacific Presents #1-- one of my favorite comics. It features the third chapter of Dave Stevens' "Rocketeer" and is backed up by Steve Ditko's "Missing Man meets the Queen Bee!" I biked to the comic shop, saw it on the rack and was delighted. My favorite new artist and The Great Ditko, together in one book. And now, 25 years later (26? Yikes), it's tacked up on the wall above my drawing table!
...I bought two, absolutely certain this would be a highly sought after issue in the decades to come. One copy to read and study and savor, and one copy to keep in prime condition so that I would one day be able to trade it for a fancy car, or a private jet, or-- even better-- Action Comics #1. Looking it up on ebay I see that I might have to hold onto that second copy for a little while longer-- you can still get one in good shape for about the cover price. Oh, well.

Here is an illustration for a story about odd musical pairings, inspired by the Alison Krausse & Robert Plant concert tour a few years ago.

It ran in June 2008 in the Bay Area News Group chain of papers. 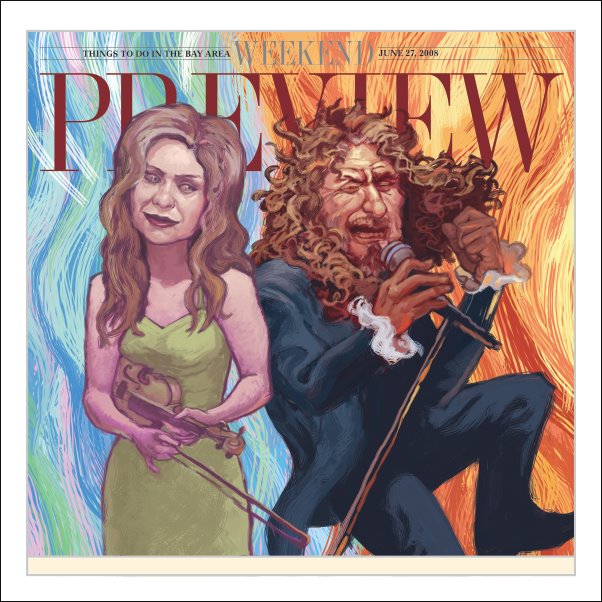 I created a little painting that I do not like. I started at the top and worked my way down with no plan. It began as a horizontal canvas. I worked on it during idle moments for 5 days, probably logging about 3 or 4 hours of work.
...The green is wrong and there's too much of it. There's a sphinx, a river, a waterfall, rocks, a tree, a happy little cabin living next to a rock with stairs that climb up to nothing, a deformed horse and a tiny little woman with a sword. It's very dumb. I shouldn't be showing it.
...Here it is! I hope you like it! 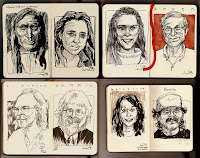 I have drawn a few more heads. I do not much care for these drawings either. I found pictures of people on the internet and made such bad drawings of them I'm sure that none of them would want to be my friend. But that's okay, they're all weird-looking, anyway.
Here they are, I hope you're not one of them!
THe ENd
.
at 6/23/2008 01:11:00 AM No comments:

...I sketched these one morning, killing half an hour or so before having to start the annoying and evil commute to work. In the interest of making these doodles more interesting I stained them in P-shop the next day.
...They are inventions. No reference was involved, nor was there any desire to make them look like anyone in particular. It's just an exercise in improvisational noggin drawing. 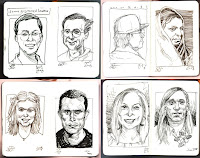 More heads, but they are from reference. My routine for these is to image search a name and then draw from any portraits of interest-- for example, "Lawrence" are the names of the two guys at the top left.
...This is an exercise in filling up a sketchbook full of head studies. It's fun and I think it's good practice; but most of all I hope it gives me a broader knowledge base when I invent my own characters, as in the previous picture.

Last week, from the library, I checked out "The Mystery of Picasso" on dvd. If you haven't seen it and you have any interest in watching The Man paint, it's terrific. You get to see Pablo, bare-chested and chain-smoking, in the studio taking on a string blank canvases. The canvases never stood a chance.

Witnessing his work as it takes shape is great fun. I enjoy watching artists work, whether in action or by looking at the sketches and studies that pile up on the way to a finished piece. You can see the artist thinking, and thinking is the most important part of the artistic process.

But what I really dug about the movie -- selfishly -- was seeing him struggle. He's going along, painting up a storm and things are looking good, but then he hits a bump. He retreats. He rushes forward. Dead end. He starts over. Another dead end. Ha! Take that, genius!

Of course he manages to come out pretty well at the end of each effort, but we can take heart that he did have moments where he was stumped. And we have to be impressed by the amount of effort that he had to put forth to find a resolution. It's not always easy, not even for Picasso.

This week I was asked to do an illustration for a story about micro-blogging, with the focus being on "Twitter"-- something I'd heard of but I didn't know what it was. After a discussion with the writer and a little research I started working on this. 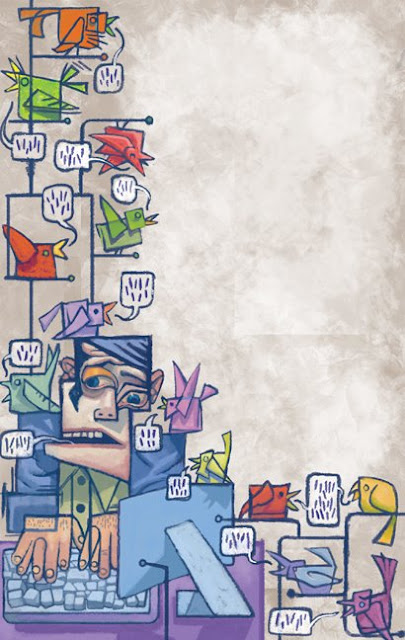 I had not drawn since seeing "The Mystery of Picasso," and the first searching marks I made were the eyes and nose of the man at the keyboard, and the bird on his right shoulder. Obviously, Picasso was playing in my head, influencing my vision and nudging my hand.

"Pablo," I said, "if you will not let me go then I cannot see where this will end. How can I paint like you for a newspaper article?"

"Shut up," he said. He appeared before my mind's eye, the cigarette in his paint-stained hand drawing a cubist's dismissive gesture in the air. "Just go. You will know what to do."

I gave in and painted in a trance, hearing his whispers. But, when I came to the word balloons for the birds I found that Picasso had gone. "Pablo," I asked, "what do the birds say?"

But then Charles Schulz appeared and my struggles were at an end.