I found a very old sketch of the figure on the right, but he wasn't the Hulk yet, just a figure running. I started inking his torso and thought the body looked like a Herb Trimpe Hulk torso. I obliterated the previous noggin, sketched up a screaming Hulk head, found some pants for him, and finished the drawing.

Initially – and with a feeling of great horror – it looked as though Herb Trimpe had been inked by Robert Crumb; not what I had intended at all... but you know what? I would buy that issue in a freakin' heartbeat. I started liking it.


Clearly the Hulk was yelling at somebody, but who? I started sketching a figure, and I thought she would turn into She-Hulk, but I've never been keen on that character, except maybe for Byrne's first run. I decided a somewhat retro Wonder Woman would do, but I pushed her slightly in the direction of a Crumb drawing to keep her in tune with her opponent.

It's a slightly goofy piece of work, I'll admit, but it was fun to play with. I guess I should have put the golden lasso in there somewhere. I could have worked that in pretty easily, now that I'm looking at it.

At this point, for a second, I considered withholding this post until I looped it in there, but it's nearing bedtime and I won't have time to get to it tomorrow. Who knows how long it'll take to get back to it.

Here's an illustration that ran with an excellent story by Richard Scheinin in the July 18 Tech section of the Mercury News. The story is about apps that might help you get over your fear of public speaking, or at least give an assist as you try to sweat your way through it. You can read it at this link!

Yeah, no public speaking for me, thank you; but the illustration came pretty easy thanks to all of the nightmarish anxiety I have when confronted by the possibility that someone might hear if I start to speak aloud.

I could have used my rough sketch as the final illustration, but I've been wanting to do vector work, since I haven't done much of that in long time. I like the rough better but the final version was fun to work on.

Here's how it looked in the paper, as designed by Daymond Gascon: 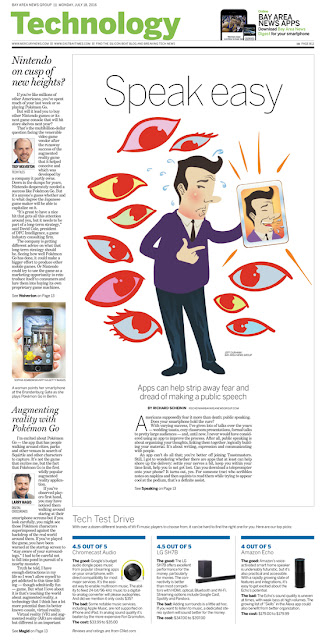 
I took a version of an illustration I recently created for work and used AnimeStudio to make it wiggle a little bit. Not a big deal, but I had started experimenting with some animation a year or two ago and unfortunately I wandered off and forgot what I had learned. Life is crummy like that sometimes.

So, I was able to bear down a couple of nights ago and attempted to relearn a few things. God, it was hard. It's not really "an animation," more of a looping gif type of thing but, since I'm not bright enough to figure out how to make a gif out of it, I made a dull looping movie. Progress!

Again, this is a minor attempt. I put it here mostly to shame myself into making more and better things. It's bound to be a letdown if you bother to click. Striving for improvement through embarrassment! Tally ho!