Started this last night after I got home from work and I woke up this morning with the notion of finishing it. After about a half hour of fiddling I decided that it was done, because I was starting to fix things. No fixing, says I. Paint; finish; go on to the next!

That's my outlook today, at any rate.

Just embrace that weird perspective and go on with your life. It's really bugging me. I may delete this if I just can't take it!

One of the James Gang

I may have mentioned this before but I was never a "western" kind of guy. I don't think I'd even seen a western movie until "Silverado" came out, and I didn't see any after that until "Unforgiven." But a couple years ago I started listening to the "Gunsmoke" radio shows (broadcast in the 50's-- before the T.V. show came on) and I picked up a couple of Moebius' translated-to-english "Blueberry" comics. "Gunsmoke" is now just about my all time favorite radio show, and Moebius' "Ballad for a Coffin" is one of my favorite comics EVER!

Since then I've been on a western spree. Louis L'Amour, Spaghetti westerns, other radio shows... can't get enough.

And, of course, I'd like to make some western doodles that look like I know what I'm doing. I've been studying books about the old west, gunfighters and trains in an attempt to reach a certain level of visual knowledge with the hope that I can create a few decent images of my own.

So far the stuff I come up with on my own looks pretty crummy. Every time I draw a bad western picture out of my head, I force myself to do 10 push ups and then draw something from reference. This way, someday, I will be a truly mighty western artist. Or, more likely, my arms will be too tired for me to draw anything.

This is my tired-arms western drawing for today. I will not show the really bad one I did before this.

A Page of Stuff 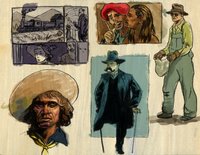 Okay. It's hot. I've soaked a t-shirt under the faucet and put it on. I've turned on the fan and as I scribble I fight the wind for control of the piece of paper. I'm flipping through a book about the old American west and drawing a couple of figures from the old photos. The wind pushes those pages around, too. I give up and draw from my head.

I carry the wind-bent and water-wrinkly paper down to the scanner. I scan. I start to color. Maggie, the most dignified of cats, walks around making a horrid gagging sound before producing the most amazing of hair balls. A true masterpiece. I pause from coloring and perform the hair ball ritual. I finish coloring. About 35 minutes to color and hair ball.

I missed posting a couple of times. . .

So I settled down under this tree, you see. There was a gentle breeze and I was a little sleepy. I thought, "why not take a little nap?" Certainly no one would miss me if I were to take the afternoon off... 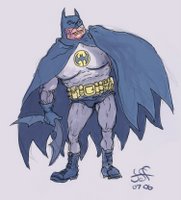 I awoke with a start and my beard was down to here! But, I thought, I just shaved! I ran across the field, back to my house to find a skyscraper! My neighborhood had been destroyed, said a passerby, by the Canadians when they attacked and took over the U.S. (so they could be closer to all the hockey teams that moved here.)

Oh, gosh, I thought. My blog! I haven't put up a new sketch or anything since I took that nap! I hope they still remember me! 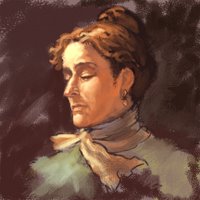 The Batman: Grubby little sketch off to the side as I worked through the day. Colored in p-shoppe.

Emily Sargent: Found a Sargent pic, blocked in the basic shapes, threw away my reference and then over-worked it to the point of blah-ness. P-shop.

There is no story for this, you can make your own. Done entirely in photoshop. 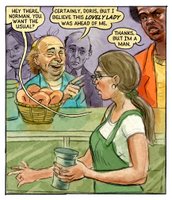 My drawing today is a single panel. A simple snapshot, you might say.

It is based on an incident I witnessed while waiting in line at a donut shop. The man who made the mistake was a tiny little guy with a pronounced squint and the victim was a very tall man who was wearing a bright orange blazer and vivid yellow shirt. They both passed off the incident with an uncomfortable solemnity.

Drawn with a stubby pencil and colored with ye olde photoshoppe!

As I glance over what I've done lately-- this one included-- I see I've been doing a lot of free-standing characters. I'll try to ground them somewhere, or put them in a relationship with something that might be in an environment. It's kind of lazy, drawing people afloat in space. I may not have time for much more than that so don't hold me to it.

This is just some lady. There is a string tied around her leg to remind me that she should be wearing a holster. I sort of forgot about it until I was finishing up the coloring in photoshop. Just imagine there is a holster with a really cool-looking pistol handle sticking out of it. Thanks.

A couple years ago, I started working on a comic-- not a professional gig but a personal project-- the two on the left are new drawings of main characters and the two on the right were background characters I felt like revisiting. 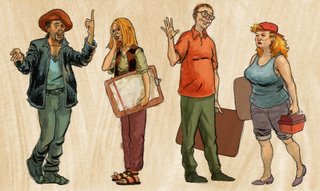 You don't have to read this next bit, I'm just rambling on today:

I've always loved comics-- I've been drawing since I ate my first crayon, and the first artists' names I learned were Kirby and Ditko and Buscema-- but I've never done more than dabble with comics. Thus far, my career as a picture-maker has taken me in a different direction but every once in a while I am inspired to increase my level of dabbling to enthusiastic dabbling.

On this occasion of comics-making-- a slow-moving slice-of-life drama about artists attending an adult school figure-study class-- I was pretty good at it for a couple of months. I'd work for an hour or so in the morning before my job and I'd try to get in a couple hours after.

My weekly process ran like this: The first day I'd write a page in the morning, arranging the lettering and layout in illustrator; I'd do quick thumbnail sketches at work during slow times-- just rough figures and scribbly environments; and then I'd work on the final art from then on out, adding color as I could. Thumbs, layouts, final drawings, lettering and colors-- all done at home on the iMac. I'd post the new page on Sunday nights, and I don't think anybody ever saw it. That's okay, I was doing it for me.

I stopped working on it when I took on a long-term freelance job. And then I focused on working on pieces that might help me get a new job. And then, other things intervened. Etc. So, when I finally got back to a point where I wanted to work on it some more, I saw it with that fresh eye; you know the one-- the one that can't stand looking at your old stuff. So here I sit, my enthusiasm blunted by too long of a vacation.

Why am I unhappy with it? I mentioned before how I'm trying to break away from doing art entirely on the computer. I've worked that way for a few years because I felt I needed to know how to do it, and now that I have a grasp on it, I'm trying to settle comfortably somewhere between the pencil and the pixel. Going back to look at this comic I can see where being strapped to a 4x5 Wacom tablet has hurt my drawing. Maybe I was used to what I was seeing on the screen but now, after having once again taken to paper and pen, I feel that I can draw better than I was drawing with the Wacom.

(Here is a sample of one of the less embarrassing pages.)

Maybe if I had a larger tablet I would be happier with the act of drawing-- If I could move my whole arm around as opposed to just wiggling the fingers and wrist I might get more of that "real drawing" feel-- but I can't afford that kind of experiment at the moment. At any rate, since I've been doing more drawing on paper I am more content with the finished work. I think my art has improved and now I have drawings that I'm collecting in sketchbooks instead of on hard drives. Well, they're collecting there, too, but you know what I mean.

I don't know if I'd revisit this abandoned project-- I'm afraid I'd have to re-draw the first twelve pages before I'd show them in public-- but looking around at all the fine work other artists are doing I'm on the brink of being inspired, once again, to try something along these lines.