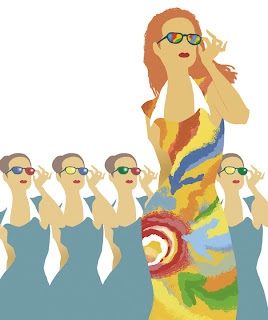 I almost forgot about this one. It ran early December in the business section on a Sunday, I think. The story was about Google's ongoing attempt at re-branding. I was aiming for a cut-out, collage-style illustration and, looking at it now, I don't think I did well with it.

The assignment was given as a rush-job, and I started working directly, believing it was needed now! I ended up getting more time to work on it than advertised, but I didn't use the time to re-think the approach. I fiddled with painting and re-painting the dress but didn't exert mental effort on more important aspects.

I really regret my handling of the main figure's hair; it should be a much more interesting design than it is. That was a close-to-deadline change, as she had the same hair-style as the figures in the background and it dynamically stand out from the crowd. A good idea, but done in haste and without a critical eye on my part. 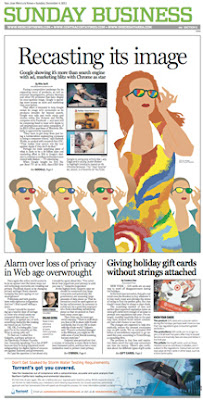 Found a picture of how it looked when it printed. Hm, I guess that looks alright. A thoughtful page-designer can prop up a mediocre illustration!

Here's a holiday illustration that will run in the Bay Area News Group newspapers on Christmas Day.

It will be published along with a collection of stories about people who have spent Christmas alone or away from their normal Christmas surroundings.

Best wishes for the season to any and all who happen across this post, and carry those positive vibes with you the other 364.

Here's a tight-crop detail screenshot of an illustration I'm working on. I posted this on my tumblr blog the other day, and I was hoping that I would be able to post the finished piece here by now.

Not gonna happen. Too many chores and hideously long days at work. I'm feeling burnt out and I'm going to try to take a day or two off and stay away from the computer. 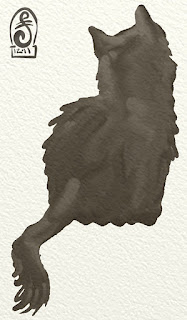 Here is a silhouette drawing of my good friend Minnie Durham. She posed approximately two minutes for this sitting and that's a long time for such a percolating bundle of energy. 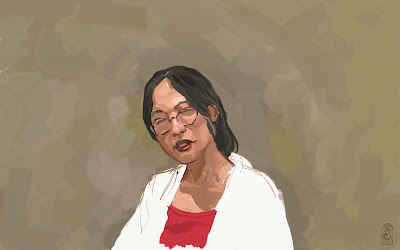 I had a moment of weakness the other day and bought the painting program ArtRage. I can't tell you how broke I am. There was no reason for it. "Normally $80, on sale for $50" it said. I lunged at the keyboard and clicked the "Buy Now! Buy Now! For God’s Sake, why is this taking so long? Buy Now!" button.

Stinging from a hard cold slap of buyer's remorse, I forced myself to stay up late after a long, miserable work day and made myself use it! As in, "If you're going to throw money away on stuff like that, you're going to use it whether you like it or not!"

Hey. It's kind of cool. I like it. It was difficult finding my way around the brush controls and palettes, but it has a different vibe than photoshop. Here's my first attempt at a portrait. It took about three hours of painting and manual reading, and it's not great, but I had a good time. About $50 worth of good time, dammit.
at 12/10/2011 12:30:00 AM 1 comment: 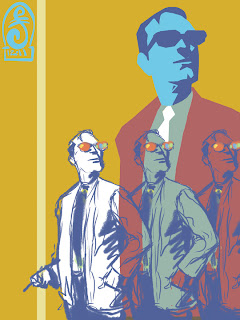 This is a collage built from doodles committed during the process of creating an illustration for the ol' newspaper job. These particular doodles were not used.

Years ago I made a habit of putting my discarded art to use in my journal. Doodles would be xeroxed, blown up, pasted down and drawn on once again. It was a great creative exercise involving drawing, designing, painting and sometimes writing. I miss the pleasures of drawing, designing and writing for myself.

This is a timid step towards trying to re-invigorate the artist by creating art in ways that I find enjoyable.

Well, heck. Now that I think about it, that's why I started working on a blog. So, this is me reminding myself why I even bother with all this nonsense.