Me & E. We got up early and couldn't go back to sleep. Today will be a long slog, to be sure. 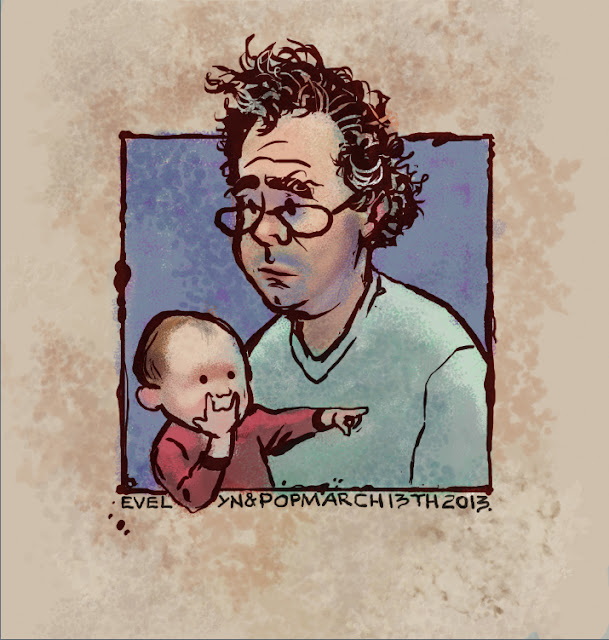 Trying To Get It Going

Total frustration has set in when it comes to getting any traction in creating my own personal artwork. I HAVE to start pushing and get some done. I'm going to try to post something every day or two. It won't always be good, but maybe bad art hanging on the internet wall will help drive me. 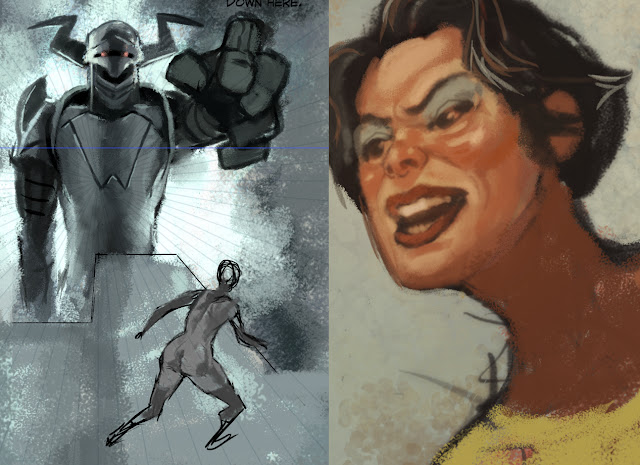 These are screen snaps from a couple of panels on a comics page I started last week. I worked on the giant guy in armor a little bit this morning. And now... damn. Off to work. Grumble.

I may have mentioned this 200 times before, but I hate television. "Hate," some say, is a hard word and rarely should it be used, and I agree; but even that word, applied with premeditation and with the respect for the true feelings of disgust it should convey, is far too tame for the angry loathing I feel for television. Earlier in life I unplugged my TV with a snarl and unplugged it remained for nearly a decade.

I've relaxed my stance slightly. The television gets plugged in for the occasional football game and the World Series, but my temper is tested by the wretched tide of repeated commercials; particularly those pleading for me to watch a sitcom or singing contest. Please. I will never! watch your show. Unless.


A friend gave me Battlestar Galactica season 1 on DVD. Thank you, I said, and put it on my shelf. There it stayed for more than two years. But one night, after a very long and frustrating day at work, I came home mad and hungry. I made a quick dinner and put the first DVD into the computer, just to trick myself into thinking about something else. It worked. The show was great.

I was up all night. No. Really. All night and into the late morning of the next day. No sleep. I staggered back to work, tired and twitchy. If you watch a TV show in a dark room for twelve or thirteen hours and then go sleepless back into your working life, every moment has an out-of-body quality that makes talking, walking and thinking seem wearily bothersome. Your eyelids have the impression that they're just not supposed to shut anymore, so blinking on purpose becomes the most important thing you have to remember to do.

I made it through the day, drove home safely, and, yes, watched several more episodes. I didn't finish the whole first season without sleeping, but I powered through in three days without missing a shift at work. I must have been prompted to such irresponsible irrationality by something close to love. Maybe it was love; that was the first television show I was fully committed to since Twin Peaks. Twin Peaks was canceled in 1991? 92? True love, for me, is rare but it bites deep.

So, getting back to the purpose of the blog, Hey! I drew this picture! Chuck Barney wrote this story about how some people avoid broadcast television shows so they can watch an entire season or an entire run in a very short amount of time. I completely grok.


No, this isn't a caricature of me watching Downton Abbey with a lap cat and a pile of supplies, but it will be once season 3 hits streaming on Netflix! The first two seasons were fab. Don't tell me who dies! Don't tell me who dies in season 3 of Walking Dead, either. Those are the next TV binges on my list.


p.s. Moments ago, as I type, I watched the last episode of Caprica. It's taken me a few weeks to get through it, as I have learned to be patient and pace myself.

Here is an illustration that ran on the February 24th Sunday front of the Oakland Tribune, San Jose Mercury News, Contra Costa Times, the Daily Review, the Argus, and um, the ... well, all those Bay Area News Group papers. (Nobody's really sure how many there are.)

Here is how it looked in the paper: 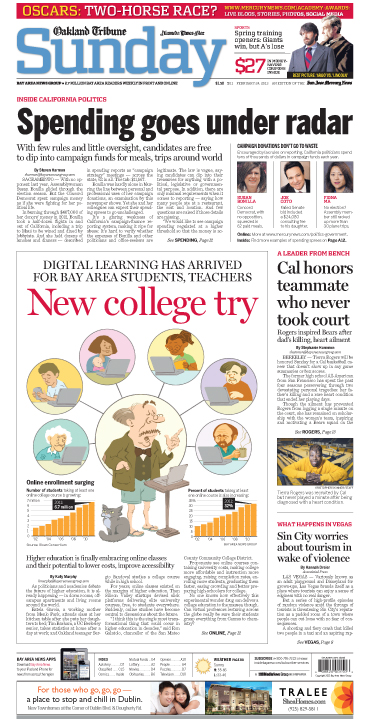