Four heads drawn very quickly, scanned as rapidly as the scanner can scan, and colored at a blistering pace.

....I seem to chicken out when it comes to aggressively distorting the female face. I will try to crank that up a notch or two the next time. 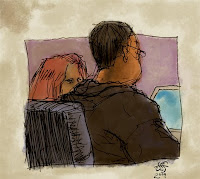 A Pox On January!

January 2009 has been a month of agony, illness, uncertainty, outrage, frustration, disaster and disappointment. None of these aggravations have been mortal, but January has borne a chilly moon-full of trial and torment.
.....I'm not superstitious. There are no such things as "bad" days, weeks, years, and so on. Mondays? Pfft. Friday the 13th? Please. Don't start. Claptrap, I say. Each moment we experience is an individual; an individual with the potential for a personality and character of it's own. Immediate change is possible at all times; from worry can come confidence and a moment of bliss can be thrown over by anguish as the eye blinks. Peculiar clusterings of good times and bad times are inevitable occurrences due to chance and personal momentum. No more than that.
.....But.
.....Last year, 2008, because of illness and financial stresses, January took on the shape of a ruffian and a scoundrel, bruising my health, battering my optimism, taking my lunch money.
.....January of 2009 has been a villain of similar character, so much so that in the search for answers to the unanswerable my shell-shocked brain has grasped but one common trait: The one responsible must be the miscreant, January. I begin to believe that evil blossoms in the foul winds of the old year gasping its last breath over the transom.
.....Once indifferent to such fanciful anxieties, now I cringe when I lift the cover on a new calendar. When February 1 appears I will begin the 11 month countdown to the return of the cold and club-wielding mob of days that threaten to tread 31 times upon the unblemished face of the new year.

....And, at this juncture -- pausing to check my email -- I have just discovered that my employer is enforcing a mandatory 40-hour furlough, without pay. This is a desperate measure to try to avoid layoffs, although it is no guarantee that layoffs will not follow.
....I am living in the armpit of the Newspaper Industry as the electric paddles are pressed to the corpse's chest. I really need to find a new career.
....See? January! Big jerk!


* * * * *
b
That is why I haven't drawn much or posted anything, as I have been burdened by worry, discomfort and misfortune. I'm okay, I'm feeling good and I'm not even that bummed out, but Jeez! Wotta crappy month!

The only thing I've doodled and colored is this uninteresting and weak thing. It was a "cute" little scribble but now it is like a tiny clay sculpture I tried to pound into shape with an iron mallet. I'm not proud of it but there is nothing else.

So, here is to February, perhaps it can be a month of positive energies and purification. Last year, he was the thug henchman of January, picking up my wallet and making sure that my foe had not missed anything; but February is the tiniest and most inconsistent of months. I am not intimidated. I will try to stare him down.

Just trying to jump start the blog again with any ol' junk. Put up something slightly lame and embarrassing and find the motivation to move it on down the page.