Hello again. I haven't been doing much art lately. The iMac hard drive became ill and died a horrible death. It's amazing how dependent we've become on the machine-- I have, at any rate. I don't listen to radio or watch TV, so the computer is my only connection to the outside world. It was nice to be cut off for a few days but -- oh, I'd say about 4 days into the fast -- I started getting twitchy.
Well, we're operational once more. Experts performed a hard drive transplant and the computer seems fine; there isn't even a noticeable surgical scar. 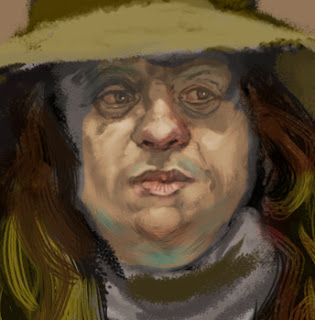 Here's a fragment of a character drawing I was working on just before our hardship. I have a couple of others near completion, so I might have something more substantial in a day or three.
at 11/30/2010 09:10:00 AM No comments:

Hello. Allow me to reintroduce myself. I am Jeff. I used to post here regularly.

I was kidnapped by pirates and taken to a faraway mist-enshrouded island. There, I was marooned and left to cope with wild animals and pre-historic savages. Using my superior technological know-how and 21st century intellect, I quickly became Emperor and ruled over all. I introduced the concept of democracy (to be implemented upon my passing, until then please keep feeding me those grapes, ladies) and had just put my best men to work on making color television when I was kidnapped by flying saucers and taken to another planet.

The sinister aliens had superior technology and wore very cool shiny, silver outfits, but they had forgotten how to tie a decent knot. I slipped easily out of their ropes, ran to the nearest highway and managed to hitchhike back to California.

I'm fairly certain my adventure has sent me backward in time and to a slightly different dimension. Here, Jerry Brown is our newly elected Governor but, in the history of my world, it should be 1975 or so, and Gerald Ford should be President. But he is not. In fact, he's dead!

Even more curiously, the internet is already in full bloom but the Beatles are appearing for the first time. I'm a little confused. I'll just try to go along cautiously and blend in with all of you here in this alternate reality.


*  *  *
Here are some drawings I created for the cover of the TimeOut tabloid, which will be appearing today in all of the East Bay editions of the Bay Area News Group newspaper family.

The Thanksgiving and Christmas holiday season is upon us, and the snow globe is a handy symbol for all things associated with the two months of American Christian celebration. I know it doesn't snow here, but these are the visual cliches we are burdened with. I don't imply that as a bad thing, it comes with the trappings of a cultural history, but I wonder if this will have meaning for anyone one hundred years from now. (I think my traumatic abduction experiences and transplantation from my native reality have left me peculiarly pensive and contemplative, not to mention wordy and pleonastic!)


The top two drawings are, of course, the roughs. My first one, the one without the dummy logo, was done in ignorance of the cover's updated design. It has been over a year since I did an illustration for the TimeOut tab-- and, the last time I looked, it had a different name! Even though I used to do a lot of these covers, I hadn't noticed the change. Pay attention, huh? Well, they probably made the change while I was busy as Emperor of that island... far beyond the subscription delivery boundaries.

Drawn entirely in Photoshop over a few days whilst working away on other stuff, too.