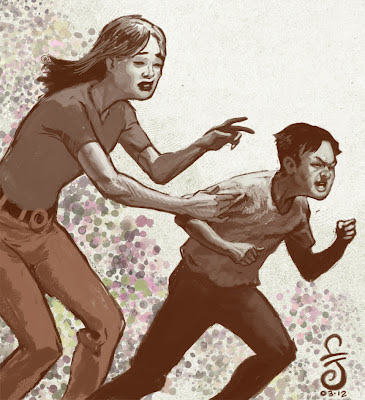 This is an unfinished, unused illustration I started on for work. I came up with another arrangement which the editors preferred over this one, and I'll post that in a couple of days.


You gotta know when to stop. 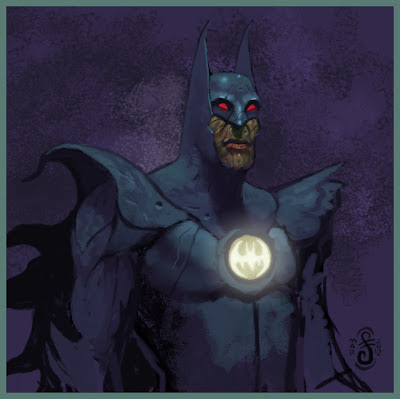 
Here's an illustration for a story about all those "terms and conditions" that come with the stuff we download from the internet.

You know, the terms and conditions that you've never read? Maybe, at one time or another, your inner voice has suggested that you should read them, but how far did you get? Did it make sense? Did you ever click the "Don't Agree" button, just to see what happens?

It turns off and you don't get to play.

What? Screw that. Quick! Turn it back on and hit the "Agree" button without reading the 75,000 word binding legal contract which might be telling you it's going to give your personal information to the Republicans.

You just paid them 99¢ for that privilege.

Well, I mean, it could. I'm not sure. I've never read that crap.

So, here are the roughs I offered during the planning stage. The initial suggestion was to have sinister characters made up of blocks of "terms and conditions" text coming out of a computer monitor. That sounds like a neat idea, but it struck me as better suited to a short animation, which could be cool, but not for the paper!


I tried a simple collage approach with the genie, in a half-hearted gesture toward the suggested idea, but I wasn't too crazy about it. I hoped the editors wouldn't want to go that direction and the drawing was bad enough that it wasn't even addressed. Whew.

The snake rough and the final idea happened at the same time. But as I drew the erupting-roll-of-paper version I thought about making it a feature panel in a silly short comic of the process of buying something online. I really like it and that would have been my preferred presentation, but I'm that way with comics. (Lower left panel may not be clear, but it was the character all tangled up in the contract.)

I've been using this simple cartoony style for the past couple of illustrations and I thought I should at least take a stab at breaking it up, so I did a more "realistic" approach for the last doodle with the monster looking over the top of the monitor. Not great, but I scratched an itch.

The editors thought my feature panel on its own would be best. As the clock chimed "tim-berrr!" and the deadline began to fall, it was decided that a mobile device –– iphone or ipad –– would be better than a laptop, so I iPadded it. I think it came out pretty good!

Here's how it looked after Daymond Gascon designed the page: 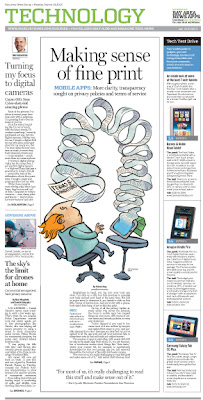 Who Makes the First Move? 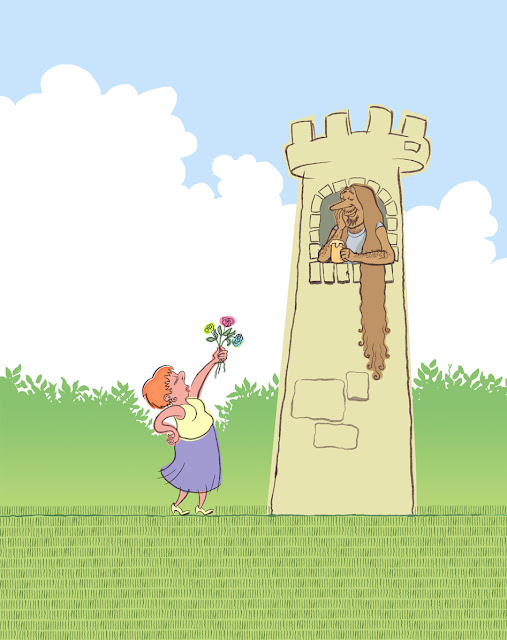 This is a pretty simple illustration, and there wasn't much evolution of the drawing from conception to execution, so a step-by-step description would be two steps and each step would look about the same.

My first sketch of the guy in the tower differed in that he had cigarette instead of a beer mug and he wasn't smiling. I self-edited the cigarette because the angriest phone call I ever got from a reader was about an illustration in which a character was smoking a pipe.

The outraged person called on my day off so I missed out on a personal berating, but the long, intensely angry message he left was a doozy and had me flinching every time my phone rang for weeks. The answering machine timed-out before he was able to get to the grand finale but it must have been wondrous!

I've always imagined him pacing back and forth, shrieking into the phone, waving the newspaper around in the air, spitting and cussing and foaming; yes, he was that furious. At the end I bet he slammed the phone down with a flourish – it was back when telephones could be slammed down – wiped the sweat from his brow and slumped into his favorite chair, panting, shaking, exhausted. Then, to calm his nerves, he lit a cigarette. 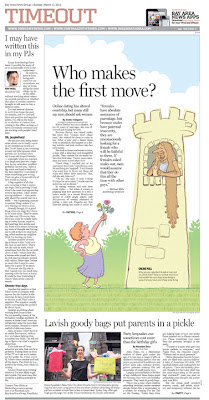 Anyway. Sorry. Went off-trail there for a second.

Here is how it ran in the paper! Jessica Yadegaran, excellent features writer and long-time very patient victim of my illustrative efforts, checks to see if it's socially acceptable for women to make the first move on desirable dudes in her story here. Sounds good to me.

Not that I'm waiting around for that. I'm married, you see. And I asked her out – but she did leave a clear trail of breadcrumbs, now that I think about it.

I found a small trove of blank or near-blank journals in my closet. I've mentioned before my inability to keep a regular sketchbook habit that lasts more than five pages; and when I get the notion to try again, I go back to whichever sketchbook is on the top of the pile and find that it is at least two years old. One can't draw right next to drawings that are two years old –– it's a distasteful mingling of disparate histories! So, I buy a new one.

This has been a repetitive behavior and, since I've survived for several decades without an improvement in discipline, I have plenty of slightly-used books. There were times where I bought two, optimistically anticipating the energy and will-power to fill up two sketchbooks! Those are completely blank.

I placed an unblemished 7" x 10" moleskine sketchbook in my bag a week ago and have managed to avoid making a mark in it yet. This is due partly to lack of time for sketching, but mostly due to fear. It has been so long since I have drawn on paper, I fear my drawings will be feeble or ghastly.

These are practice sketches, examples created to prove to the cowardly heart that it won't be as painful as believed. And it has worked. They are not all that terrible. Come, right hand, grip that pen, open that sketchbook… attack! 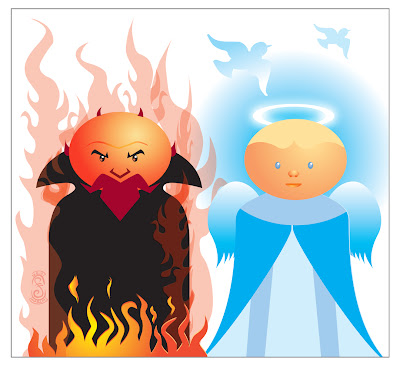 These two characters appeared early in the idea-development phase of an illustration for work (same project as yesterday's blog post.)

I knew from the start they weren't likely to be used for the assignment but during idle moments I assembled them anyway.

It's good exercise if I can learn something from it, like that glowing halo. Never done that before. Progress!

While fleshing out ideas for a work-related illustration, I drew this with the brush tool in illustrator. It's only a brainstorming doodle; rejected, useless and cast aside. It's no good and no good to anyone. I know; I'll blog it!

I slapped KISS on his back while prepping for this post. I'm in the throes of a personal KISS revival after not paying attention to their music for a couple of decades, and I'm a bit obsessed at the moment.

I think I'm regressing. Funny, I wish my kid-sister lived in the room next-next door so I could play "Strutter" real loud just to annoy her.

I was probably a 10-year-old boy when I first heard/saw them and they appealed to the cravings of my 10-year-old boy-ness – loud electric guitars, explosions, super-hero and science-fiction characters, naughty lyrics – and I had no defense. I begged my parents for the Alive! album and spun that thing over and over on the turntable.

Oh, the sound of the needle settling down on the record and that crackling, popping moment of silence before the music started. That's gotta be the best way to listen to KISS albums!

I still have my old records but, alas, no turntable. So, I'll spotify 'em until the Easter Bunny, the Tooth Fairy, Santa or some other psuedo-religious consumer-society mascot-patron blesses me with one. 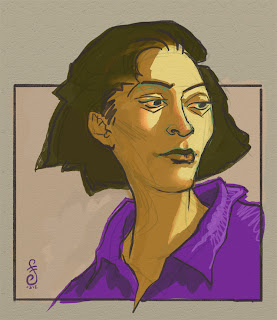 Drew a quick head in photoshop and jumped over to ArtRage to color it. I haven't messed with ArtRage lately and have forgotten how to get around smoothly in that program. I blocked in the colors pretty easily but became very frustrated adjusting brushes and colors. I stuck with it for a little bit, but retreated to photoshop and tidied it up.

That's How Close It Was 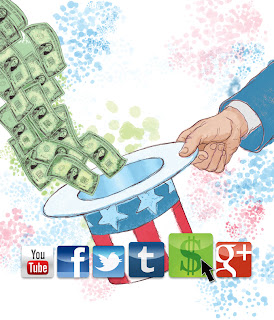 Today's illustration is another collaborative exercise featuring dollar bills so expertly rendered by the artist Chuck Todd that he is likely under governmental surveillance. Fans of art – and concerned federal agents – can see more of his criminally fine artwork at chucktodd.net.


I estimate our effort was completed, from a standing start, in less than one shift's time. Mr. Todd whipped up the initial thumbnail, Mr. Daymond Gascon designed a layout around the thumbnail, and then I began fleshing out the drawing.

Hands are one of my favorite things to draw -- whether I draw them well or not -- but almost every hand-drawing I undertake results in a surprise. For this piece I invented a hand, similarly posed, but it looked wrong. It was interesting and not terrible, but it was distracting. As a supporting character, it had to be an accurate, tame and humble hand.

I took a quick PhotoBooth picture of my own hand, placed it in photoshop and traced over the top of it… but it looked weird, too. Using my weird tracing and the photo as reference, I drew the final that you see here. Time was lost to that wobbly process but I managed to create an unremarkable human paw.

The hat was fairly quick work and the floating rectangular shapes for the money were easy to do. (Looking at this now I should have had them complete their fall into the hat. Woulda looked better.)

The big slowdown started when I was confronted with the app-style logos. My intention was to create quick versions in illustrator and then work over the top of them in photoshop in a manner similar to the rest of the illustration, to make a more harmonious presentation.  But I'm slow and out of my element working in Illustrator. As I worked to make even simple logos, the deadline sprinted faster.

I was beginning to sweat a little when Chuck Todd offered to fill in all those dollar bill shapes I had roughed out. Hmm. Drawing that would be really boring, I thought. "Sure," I said. "I mean, I want to draw many dollar bills, but I may not have the time." Ha. Tricked him into it.

Good thing! Even with the assist I wasn't going to be able to create and trace those logos. I opted to make them look like actual app-style buttons, all vectored-out and unashamedly different from the drawing. A necessary compromise.

It was easy to drop in Chuck's money and I colored them quickly. I arranged and re-arranged the elements for a few minutes, splashed some spattery splatterings in the back ground and sent it to be placed on the page.

The deadline snapped shut as I hit "send." Page designer Jennifer Morris placed it on the page, made a few adjustments and that was that.

If the deadline was a trap in an Indiana Jones movie, and Indy reached back into the trap to grab his hat before making his escape, his arm would have been crushed and yanked out of it's socket. Poor Short Round would have had to tie off the artery with the whip and drag him, bloodied and ruined, out of that cave. That's how close it was.