Last month I had the opportunity to create an illustration for the annual garden calendar page, and I had a great time with it. There was a comfortable amount of lead time and I was able to build up a small crowd of characters involved in gardening activities. I fell back on a simple cartooning style that flows naturally for me and the characters appeared without much fuss. 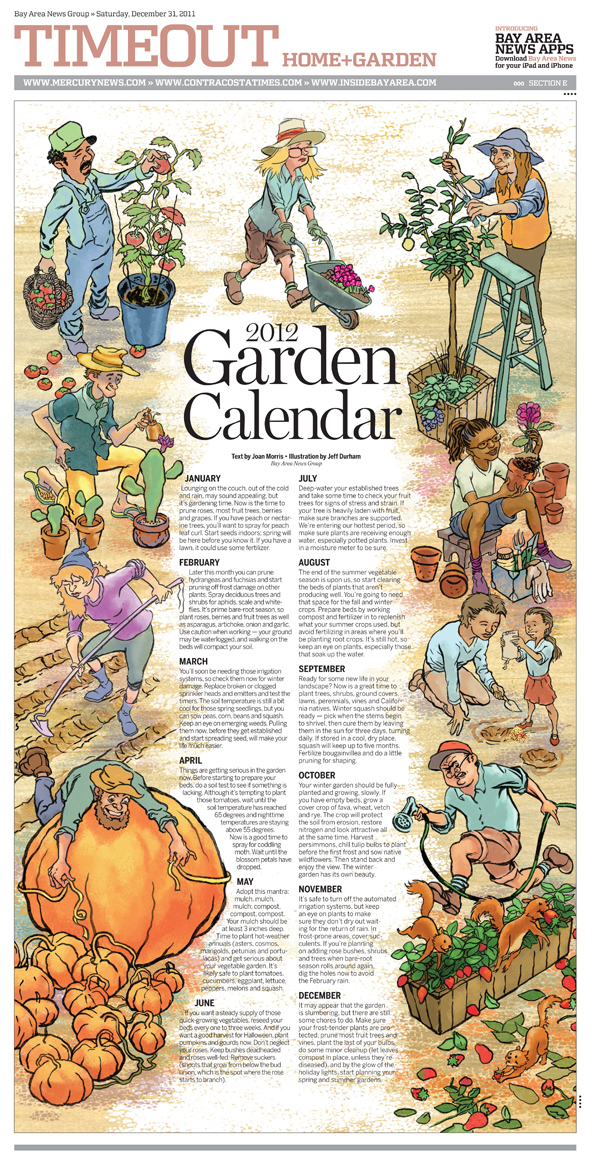 Of course I misjudged the amount of space that was needed for the text, so there was much squishing, tweaking and redrawing to do as the deadline came stomping into the room. But, aside from the final push (and that wasn't very bad, either) this was good relaxing fun for me from start to finish.

Working on the final character, I took screenshots as I made my way through the process and posted them to my twitter feed. It was an experiment, and I had a good time with it, but I don't think anybody noticed. Maybe next time. 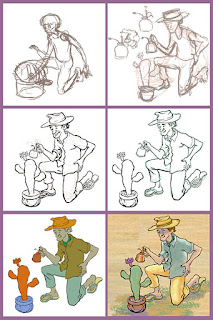 I had several other characters roughed in as I went along but I can't seem to find them in my collection of files. If I run across them I'll tack them on the bottom here.

I've had a few extra-long work days this week (with another to go) and -- because I'm painting the room where my computer normally resides and rearranging furniture everywhere else -- my temporary computer set-up is messy, cramped and almost unusable. That's my excuse for my horribly slow start this blogging year. 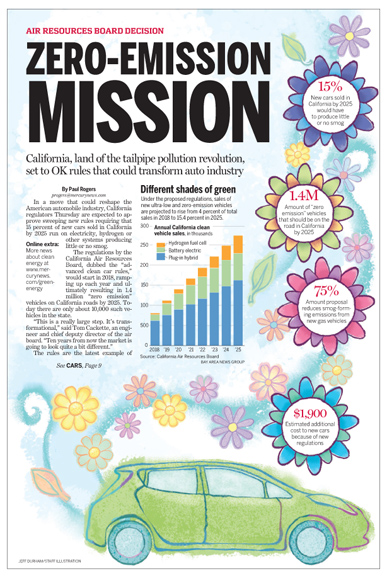 But visual journalist and prolific blogger Charles Apple posted a nice piece about a front page layout and graphic I contributed to.

Click on the picture and you'll get a nicely written and informative article about how it was created.

And definitely check out the rest of his blog. I'm a regular reader and his blog should be required reading if you are interested in visual journalism.

Ah, that was easy. Thank you Mr. Apple for making this a very easy blog post!

The story for this assignment was about weight-loss-challenge websites where participants compete to reach dieting goals, often with the added incentive of some sort of monetary wager. "Diet betting" is another way of describing it.


There are many variations as to how the competitions work, so there wasn't a universal aspect I could grab ahold of and play with; but my first idea was to focus on the choice between food and money. My impression was that was the motivation.

I showed my rough and it was well-received. The rough was liked so much that I was told to just use that! So, I cleaned it up a touch and colored it.

I had a few days before it was due and I made some noise about how I wanted to go a little further with it, but I was a little busy and chose not to throw another thought at the problem.

When the time came to send it to the page designers I fretted for a few minutes, again worrying that it might not be a clear enough visual. But a page designer or editor dropped in the headline "Dieting for Dollars," which ties it together very well.

I wish I'd been brighter and zanier with the colors; it could have been more exciting to look at that way.

Here's how it appeared on the page: 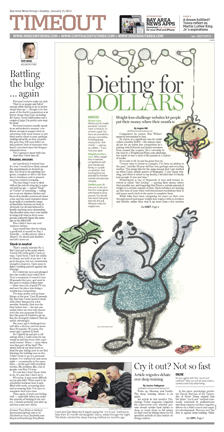 I started this painting last night after work, but only managed to stay awake for about half an hour. I blocked in the shapes, started on Nimoy's hat and fell asleep at the keyboard.

I got home tonight and felt too tired to work again, but I fought through and put in about two hours, give or take a few.

I was aiming to finish the painting and post it before midnight. I'm going miss that by about 20 minutes, but that's more due to writing this nonsense than drawing-time.

I'm a little late getting the 2012 edition of the blog in motion. I've uploaded some art in draft mode but I haven't had time to write anything helpful, informative or interesting to go with it.

My goal for blog-improvement this year is to try to make it into something more than just an art-dump. I'm going to try include some tutorials that go step-by-step through my process of creating some of this visual noise I'm making.

BUT! Since I've haven't been able to round up a decent amount of time after my work and commute schedule I'm just going to dump some fresh art.