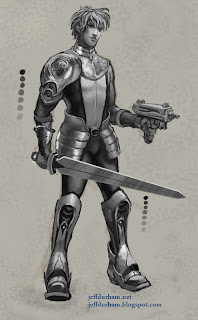 A character design from the same stash as the March 18th post. I only have time for a quick post today. There will be no irritating writing for you to slog through. Well, just three short sentences. Four, I mean. Five. 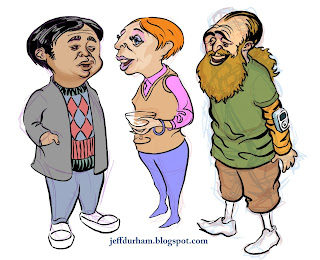 I have an illustration due at work this week and only a vague idea of what to do. Sometimes it's best to simply start something, rather than try to carefully plan.

I'm creating another cover for that little-known, illusory magazine of retro-speculative imaginative fiction, "Interesting Sci-Fi." (For previous I-Sci-Fi efforts, click the "I-Sci-Fi" link in the left column under "Labels.")

This is going to be a big step in the evolution of this (non) publication. No longer will I-Sci-Fi (not) be printed in the tradition of the Science-Fiction periodicals of the 30s, 40s and 50s. Now -- jumping on the coattails of the latest techno-fad -- it will be reformatted to (not) be published on your iPad. The structural paradigm shift involves a slight, dramatic change in the shape this next painting. It's marginally shorter and ready for the future.

I've only found a couple of hours to work on it, therefore I haven't gotten past the "roughs" stage. I should get some time to paint this weekend. I might write a short piece of (lousy) sci-fi to go with it. I have a story idea, but if I can't find the time, I'll just skip that part and make the picture.

I've been looking at "Amazing Stories" magazine covers recently, so I am under the influence of Robert Fuqua,  Arnold Kohn and Robert Gibson Jones. Also, when I'm in this state of mind, I'm always striving to be like Kelly Freas. 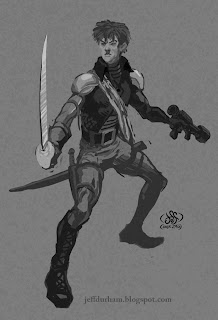 Last year, I did a few hasty character design doodles for a friend of mine to help him with a job. I think it was for a video game. Or something. Eh, I forget the particulars, but I don't think my drawings impressed the client. I had a good time though!

Here are two old illustrations for the same topic. I found the files sitting together in a folder, side by side.

I can't find a bigger copy of the first drawing. This is all I've got. There isn't a hard copy in my collection of tear sheets, although I'm pretty sure it was printed. I was happy with the retro-cartoon style and was sort of proud of it for a day or so.

I vaguely remember the story was about a Russian black market trade on pills that supposedly could cure a hangover... or something like that. My memory sees a story about spies and Russian mafia and shady American doctors passing the pills along to unsuspecting patients; but I might just be making that up. Sort of fits the picture, doesn't it? (If you don't know the truth, sometimes it's okay to make something up, as long as you're not deliberately lying. I'm okay with that.)

The second drawing is a puzzle. Here's my guess, and I'm also making this up but not purposefully lying: I was just goofing around.

I LOVE the later works of Picasso, and I like to do improvisational riffs in that style. That's not to say my efforts looks like his work -- more likely, it appears I'm trying to rip him off -- but I like the freedom and the surprise I feel when working that way. It's fun!

It took a long time to gain enough confidence in that approach to try to push one past the editors. I'd bet that I was working on both drawings at the same time, and when it came time to turn them in I chickened out and played it 'safe' by opting to go with the cartoon. Or maybe I just thought the first drawing was better suited to the story.

I kinda like them both, but I lean toward the second just because it's weirder. 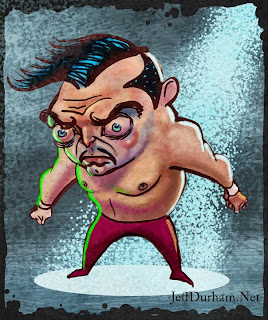 Ah, don't pay any attention to this one. I had a bad cold. I was scribbling around under the influence of strong medicine; drawing while listening to some old time radio shows.

I finally came out of my trance to find that I had just spent WAY too much time (poorly) coloring a fiddly little doodle. This one doesn't count. Please don't show it to anyone. 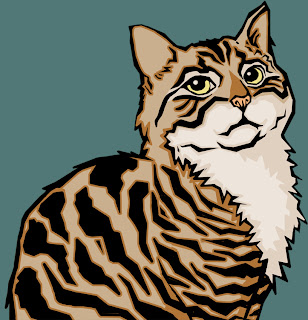 This is one of my first works for my job as a newspaper illustrator. It was part of an illustration for a story about abused pets. The original file has a March 2001 date on it-- that's about six weeks into my career. I didn't have a pen-tablet at work yet, and it shows in this piece. There are no signs of pressure sensitive pen strokes, just click and shift-click to create straight lines. I enjoy the vaguely woodcut look to working that way, and I've used that technique quite a few times, but it seems slow me down.
I'm pretty sure it was created on a layer above a scanned drawing or photograph. If you do not recognize him from previous posts -- he does make appearances in my work from time to time -- this is a portrait of my good friend Quincy. Ten years later, he looks about the same.
I can't seem to find a copy of the complete illustration, either the digital file or a hard copy I could take a picture of.
The End
at 3/06/2011 10:25:00 AM No comments:

Shortly before "The Dark Knight" came out, I was asked if I wanted to do the cover for the entertainment tabloid. I had to decline; I had too many other chores.

Sometimes, if I have to pass up an assignment that I don't want to pass up,  I work on it anyway. I grabbed one of the promo photos and did this as a rough. There was a lot of buzz that Ledger absolutely stole the show, so I considered a layout that would feature the joker. And this is as far as I got.