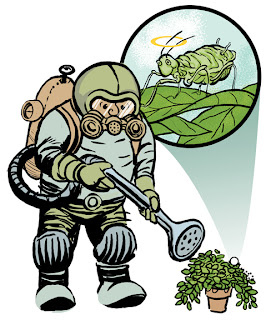 Here is another portion of an illustration done for work. Go here for the first part, or just scroll down a bit, it's only a few posts back.

... but this is all I have right now. Another oldie. There's a semi-nteresting story behind it, though (semi-interesting to me, at least, but I've heard it before.) 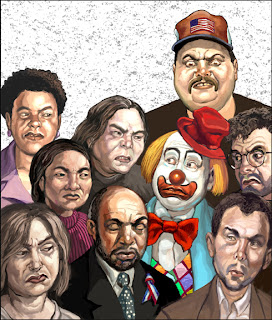 This ran with an article that was published a couple of months after the attack on the World Trade Center in New York, and the headline was "Is it OK to laugh now?" or something like that. (Edit: After a little searching I can say that's exactly what it was called, and this was the cover to the entertainment tabloid, not an illustration on the regular news page.)

It was fun to paint, but I remember this assignment as my first huge frustration with an editor. The idea I pitched was a crowd of clowns-- just like this layout, more or less -- but the characters would all be sad clowns. They would have frowns, their heads bowed, their eyes shut; very serious and dignified and respectful for a bunch of clowns.

But one of them would have a smile, and this clown would be looking slyly at one of the somber clowns next to him. And in his hand? A pie! Ready to go. It is time! Ha!

I was really excited about it. However, the editor saw one of my other thumbnails, and it looked like this illustration: People, still sad and hurt, cautiously or angrily eying the clown in their midst.

I was still new on the job, I still had to ask questions all of the time about how things worked. My confidence in my instincts was strong but I didn't have the weight of experience behind me. I gave in out of respect for the editor even though I knew it was the lesser of the two concepts.

Oh, well. Just another lesson about how you shouldn't EVER show anyone an idea you don't like -- particularly when working with a client or an editor -- because that's the idea they will like best. Every. Time.

The faces in the crowd I invented or found on the internet, and I did improv portraits from them, changing their expressions to fit the scene. The guy to the right of the clown isn't off the internet. He looks an awful lot like me.

Relax, It's Only Shakespeare

I've hit a rough spot lately, creatively speaking -- again. Work, commute, work late, commute. Very frustrating. The past month has been extremely busy. I have managed to do a couple of drawings but I'm neither finished with them, nor happy with them. I think I've been too burnt out to bring my best to the drawing board when I finally get there. 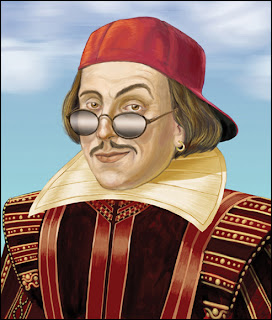 Here's another old thing which I will use to prop up my blogging habit. This was the first digital painting I did for my newspaper job. It ran on the cover of the entertainment tabloid. The story was about the unwarranted intimidation of Shakespeare on the modern audience. He wrote for the common folk, after all, and his plays were pop theater. No reason to be intimidated by the Bard. He's about as hip and edgy and naughty an artist as ever was.

I found this illustration amidst the files of my very first website. The story for this illustration? I don't remember. It was 2001. It was one of the first things I made for my newspaper job. I do remember I drew it in pencil first, scanned it in and I might have worked a photoshop/illustrator combo to get it done-- pretty tricky stuff for a newbie.

I kind of like it. As I've said before, it's fun to see stuff I've forgotten about. It's like looking at an artist I'm not familiar with. Sorry it's so tiny. It's all I've got. 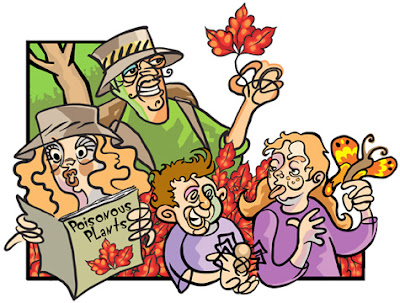 Later:
You know what? I DO remember a story about this picture. The page designer was anxious for a place file-- that's a copy of the work to put on the designer's page so he can make sure the size right, and design around it. I was the new guy, and veterans -- rightly so -- are always a little nervous about dealing with rookies. So, the designer approached me when I was still figuring out the linework on the drawing and had only applied a few patches of color. I sent a copy of it as it was, and I went back to work.

When I finished it, I sent it to the page designer and went on to the next project. A few days later, arriving at work, I heard a couple of compliments as I made my way to my desk. "Jeff, the illustration for Sunday's Bay Area Living section front looks terrific. Good work," they said; probably just trying to give the new guy a little confidence. I'll take that. I felt good. I went to the table where they have all the papers stacked and I grabbed a few copies. I was excited about seeing my work on the front-- and it was going to be big!

Ah, yes. And there -- you guessed it -- was the horrible, unfinished place file.

I think the father and son were colored in, or maybe just their shirts. There were only a couple of leaves drawn. hadn't figured out the design for the little girl's face, so I don't think she even had eyes, yet. Etc. I'm afraid to go on because I didn't save a copy of it, and I might be making stuff up without realizing it. There was a LOT wrong with it. At best it was 1/3 done.

There's nothing like that sick feeling you get knowing that you've somehow made a mistake, and that mistake has been printed 100,000 times and distributed to newsstands and doorsteps all over the Bay Area. (Newspapers were in better shape back then, so that may be a very conservative estimate for a Sunday section front, but you get the idea.)

And the absolute worst part of it? I don't think anybody knew it wasn't done! They seemed to like it. That will inflame the humility of the humblest of artists. 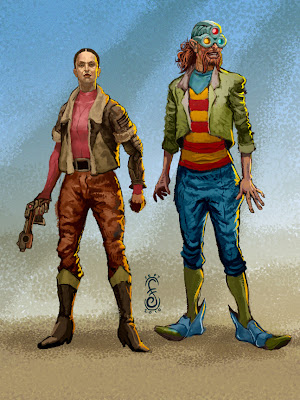 Here are a couple more efforts in character design. I'm being far too precious with these. I want to be doing rougher, less refined drawings but I keep getting wrapped up in unnecessary details. Next time.

Okay, the guy on the right is a bit of a re-hash, but I've been thinking about him again of late. I did this one without looking at my previous drawing. He's an attractive character to me. Skinny, ugly, a fashion rebel... I dig him.

Here's part of an illustration I did for work a couple of weeks ago. The story addressed common misconceptions about gardening-- it was one of those stories with a list of topics covered in short bursts. The initial idea was to do little illustrations for each topic, but I just couldn't find the time. I ended up putting in some overnight hours just before deadline to get things looking better. 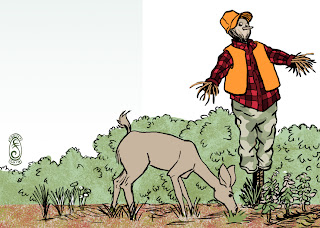 I'll post the other drawings later. This cartoon ran along the bottom of the layout. It pertains to how difficult it is to deer-proof your garden.