Old Heads and No Story

I drew this head about three years ago. I didn't much care for the drawing and decided it needed a quick little story to go with it. I started writing and I had a great time, but another significant character appeared and I felt I should do a drawing of him, too. 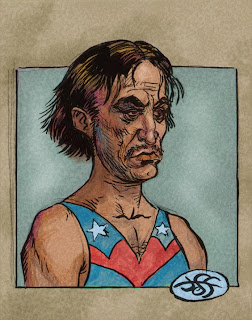 As I drew the second character, another ending occurred to me, but it would require a monkey. So, I drew the monkey. 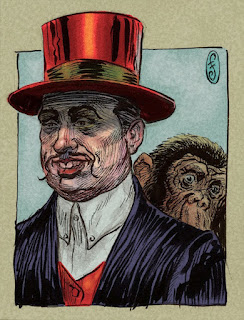 I went back and rewrote the story -- this happened in late 2010 -- but I lost focus and didn't get around putting it all together. Now, I can't for the life of me remember what the ending was. I thought I had it written in draft mode, but it's not there.

So, here are a couple of old heads. Story not included. 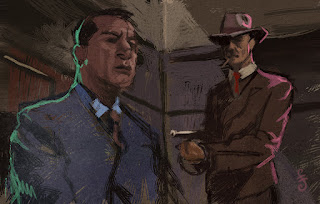 Referenced from a screen cap from a Star Trek episode; you know that one when they land on a planet full of old school Chicago gangsters. Wasn't trying to be faithful, just quick. 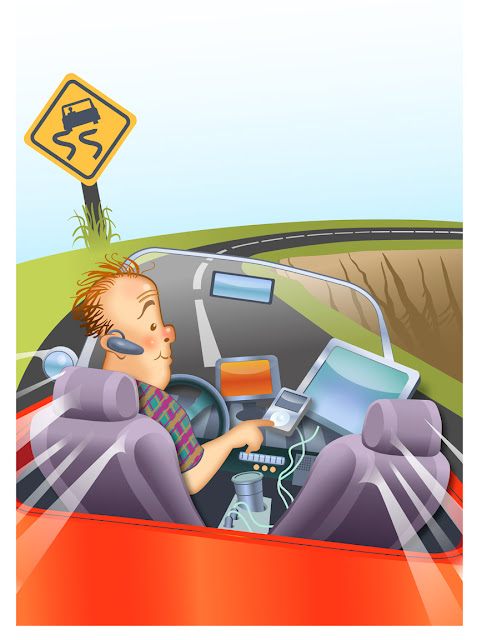 This illustration was challenging. Most of them are, aren't they? True. But, to compound the challenge, I decided I would create it as a vector illustration. I have traditionally resisted the shiny, glossy, inhuman temptation of vector drawing. I don't dig on the slickness of it. I would rather paint with a shaving brush dipped in thick coffee on newsprint paper.

But many friends and colleagues work in vector and they do a very good job with it. I've dabbled a time or two -- learned a few tricks -- but I've dabbled without true commitment. When I see my painted tones lost beneath smooth blends and my shaky lines reined in by those sanitizing bezier handles I run back to the grubby brushes of Photoshop.

I resolved to confront my bias and embrace the tool that dominates modern illustration. Perhaps, in my cowardly heart, I dislike it so much because I don't know how to do it. So, let's learn how to do it. It might help me get a better job! Ha ha! Just kidding. Ha ha. (Email me with any offers.)

Above right is the final, so you see that I managed to finish. I drew a sloppy thumbnail rough in Photoshop and then dragged it into Illustrator. Many times the willpower wavered but I stayed true to my charted course.

There are a few weird tangents that I'm not digging, and I would definitely arrange it differently if I were to revisit it, but my attentions were focused as much on the tools and techniques as on the work itself. I fixed a few things at the end and wanted to do more but time was short and I was brain drained. It was more complex than any of my previous vector attempts. I'm mildly proud of the effort even if I crossed the finish line hopping on one leg and looking like hell. I consider it an ugly win. 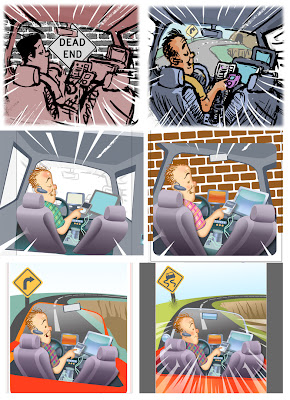 1-Top Left: My first doodle is a variation on an idea I used for an assignment when I was in college. I don't have the original to show, but it was the view from inside a clown car. There were pies and big feet and clown heads crammed willy nilly into the picture frame as you looked through the windshield… at a brick wall! I thought it was cute. It got a chuckle or two. Not this time, tho. Response was chilly from a couple of people. Fine.

2-Top Right: Refinement of the doodle with an oncoming bend in the road. Better, but I'm not thrilled with it at this point. The "punchline" of the joke looks like it's crammed in to a little frame, but it's unavoidable if you're inside a car looking forward. I start the final and hope to find a better solution later.

3-Middle Left: I begin to fight Illustrator. What you can't see is the Adobe Illustrator Quick-Start manual on my lap and the blurry YouTube Illustrator tutorials playing on my ipad. You cannot see me sweating and you cannot hear me swearing, but I was cussing and moist of brow.

4-Middle Right: At this point I want to toss the computer out the window, or drive it into a brick wall. I'm working hard to put shines on the screens, blends on blends, inner glows and outer glows on shapes, masks on blends and shapes, and drop-shadows behind blended, glowing, shiny groupings of shapes filled with blurred gradient trickery... shit, can't I just draw?

I'm frustrated because this is where my unfamiliarity with vector tools results in an intense feeling that this is more technical than creative. In an act of rebellion I try on my first idea with the brick wall, just to show how brilliant it was! Not brilliant, tho. Ugly, to speak true. That makes me mad, too.

Also, one of my fellow graphickers reminds me how awful it is to give a page designer a contained, perfectly square illustration. I know that, but I've made it square anyway. Amateur. Now I'm seething. Time to break something.

5-Bottom Left: In a fit of Ferrignoan rage, I tear the roof off of the car and …  and I start to feel better. Now I don't have to describe the driver's approaching demise inside the windshield frame. I can change the perspective of the piece and space appears in all directions. I'm no longer trapped inside a tiny car pushing shapes around in a confined space. I'm no longer trying to drive from the back seat.

With that release of tension I'm able to go back to building the illustration. That's how I describe it to myself; I am "building" something on top of a drawing. That sounds a little more creative and it becomes a word I cling to as a mantra and continue.

6-Bottom Right: I like the speed-lines or speed-whiskers in the original roughs and I go after them with enthusiasm as the deadline approaches. It's not working. Too much! I delete them all and put only a few back in. One of my pals suggests the change of road sign. I don't know why but it does seem funnier to me than the other. 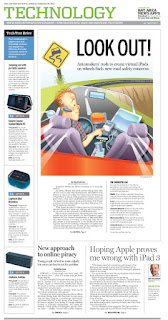 I really should have raised the road higher and forgone the realistic perspective of the road bending in the distance -- it's playful and cartoony enough to do that and the joke would read better.

I could go on, but that's enough typing. Hands... so tired.

I'll come back to edit and clean up this mess later.

Hey! This blog is six years old as of February 19! Congratulations to me for sticking with it. When I started blogging I didn't think I had it in me; now I can't imagine doing without it. I'm going to try to amplify this habit more than ever.

I want to find a way to do more artwork and I will push to get more done for the blog, for myself and for my career. I'm in a horrible art-slump and I want to get out of it. I haven't had paying freelance work in years and the day job just ain't what it used to be.

My resolutions for the blog new year: 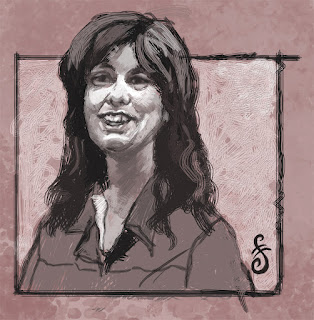 I didn't have anything ready to post tonight so I made this portrait just now. I have no idea who she is.

I typed in a woman's name, hit search, scrolled waaaay down the page and picked an interesting face. 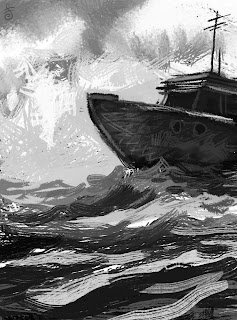 I've posted a few finished pieces in a row so it's time to slouch down the stairs and answer the blog's door bell in my boxer shorts and old Grateful Dead t-shirt.

Here is an informal doodle. While trying out a batch of wild and weird Photoshop brushes I rediscovered on my palette, this very grubby thing happened.

The Casserole I Didn't Draw 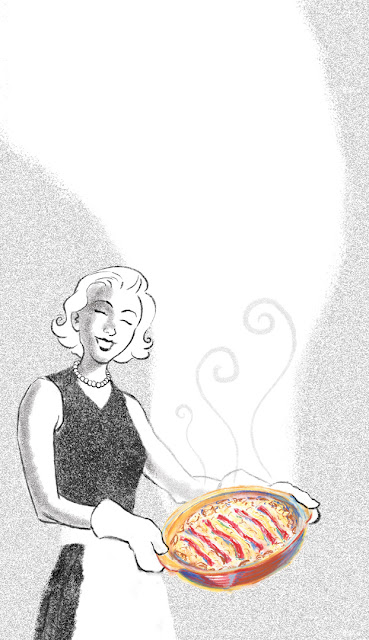 Here is an illustration that will run Thursday in the Bay Area News Group newspapers. This is an artist mash-up between myself and fellow graphics-podder Dave Johnson.

The concept was presented to us as executed-- a retro-style home-maker lady in black and white, and a casserole in full color.

Mr. Johnson got out his fancy pastel crayons and cooked-up the meal, and I scribbled a digital faux-charcoal cutie. 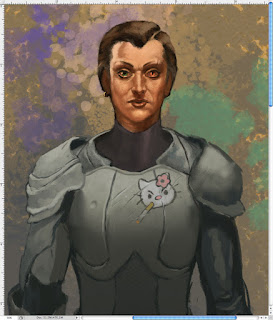 I started drawing this lady back in early December. She was supposed to be a character design exercise, like the drawings under the label: "Character Design."

I didn't want to spend more than a day or two messing around with it, but I'm not even close to "finished." I haven't done anything else since beginning this doodle. Nothing. Sure, there has been work-related art, but only work-related art. And most of what you see here was drawn in the opening session back in 2011.

Every time I work on her I dither, I dawdle, I draw and redraw bits and pieces over and over again. I've had a few home improvement chores eating up my days off but it's been more than a month since I've drawn a line for myself that hasn't been lost in this bottomless pit of a doodle.

Today I decided to spend two hours and finish it up and get it over with. I'm pretty efficient when it comes time to get something done in a hurry.

I felt that sense of dread when the photoshop file opened and she looked at me. "Are you really going to try again?" She looks skeptical. I shouldn't have drawn her face until the very end. I can do this. Easy.

Two hours passed, her legs are still only roughed in, I've changed her hairstyle and her freckles several times and put a dumb sticker on her breastplate. That's it.

Well, I've just decided she's cursed. I don't believe in that kind of thing -- superstitious explanations are bunk! -- but this one is definitely cursed.

Sometimes you've got to walk away and get on with the next bit.