In the early 1900s it became fashionable for adventurous souls in the upper-crust of western society to travel to Africa -- the Dark Continent -- for the thrill of hunting on safari. It was not uncommon for the more daring women of the time to accompany their men into the wilds of that uncivilized land.

Many of these refined ladies brought along some of the accoutrements of their fashionably pretentious lives to make the hardships of the safari less traumatic. It was not unusual to come upon an encampment to find a wind-up Victrola playing wax records or a full-length mirror set up inside a woman's tent. A very popular comfort for the ladies was the companionship of a lap dog. Sadly, a number of these domesticated and defenseless critters wandered away from the safety of their campsites and were tragically lost to the perils of the savage land -- or so it was thought. 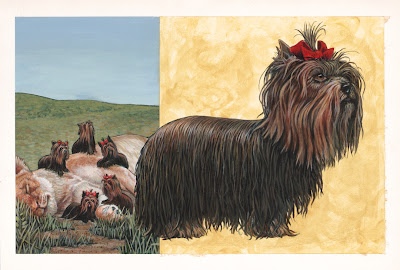 During the past decade, from the remaining wildernesses of Africa, there have been reports of large packs of very small dogs lurking in the jungles and roaming on the veldt. These accounts were not given credence until recently, as the frequency of these sightings has increased, and the carcasses of several beasts -- victims riddled with hundreds of tiny, vicious bite-marks --  have been studied.

The few human witnesses to the attacks of the African Yorkshire Terrier describe the dogs as swarming and overwhelming their prey much in the manner of the piranha. It appears there is little defense against the quick, painful, skin-pinching bites and high-pitched yapping as they circle and confuse their quarry.

So far there have been no known human victims. Why not? It seems odd considering their seemingly fearless attacks on water buffalo, hippos, and even the occasional lion. Scientists have not yet been able to study these resourceful beasts but the popular theory is that they still retain the instincts that cause their domesticated cousins to fear being stepped on by someone with heavy shoes.

Old Newspaper Illustration Plus One Doodle 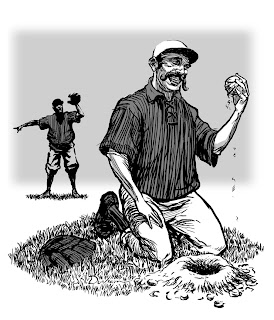 Gosh, I don't remember the particulars of the story that I did this drawing for. I don't think it was the centerpiece; more likely something to fill up space after the jump. Maybe they didn't even use it.

I think it the story had an incident wherein the ball ended up in a gopher hole in the outfield and the fielder had to drop his mit and actually dig like crazy to get the ball back. I wish I could say he got it out and threw the runner out at home, but that would be a lie.

That would make a good story to go with this, tho. I might re-type this later and spiff it up with a pleasant fib. 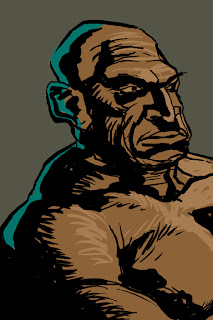 I've had this doodle floating around for years! Always kind of liked it, but I didn't know what to say about it. I have no idea where it came from. It's mine, but I'll be darned if I could tell you a thing about it.

I posted it in draft mode when I first started this blog-thing. It just sat there. Didn't know what to say. Eventually I deleted it. It was too hard to think of something. 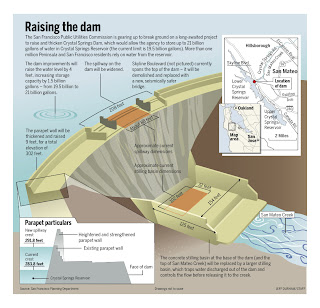 Almost forgot about this one! This ran a couple of weeks ago in the San Mateo County Times and then again, later, in the Mercury News-- I think. Maybe it was the other way around. I didn't see it in print.

You see, I do these things and then move on to the next project. I'm not very sentimental when it comes to my work. "Done!" I say, as I shake my hand to get the blood back to the fingers: "Next!"

I only had a couple of days to put this one together. I was a little nervous when I started-- I wasn't sure I was smart enough to figure out a way to show-and-tell this. What do I know about dams? A nifty side-effect of a project like this is you get to learn something.

I'm fairly happy with it, considering the rush. I was slightly worried as I worked on it; I wasn't certain I was going finish it in time. In the final 3 or 4 hours of work, it took shape and became a thing I could recognize. I enjoy that moment when you know that you have tamed the thing, and that it IS going to work after all.

I put this together in Illustrator. I refrained from resorting to photoshop, although all my instincts pulled in that direction. I've been studying Illustrator, trying to learn more so I can do more-- this was a real test to see if any of my studies had stuck to my brain.

It ain't a thing of beauty, but I made it! I learned a few things and the deadline was met. 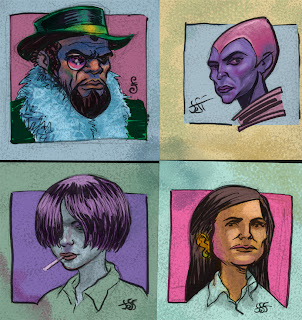 I don't know that I'm helping myself overmuch with these head drawings. I've doodled heads for decades without applying much thought to them. Sure, I set out to draw a head, but I don't often concentrate on the process of drawing a head when I'm doing them. I rough a shape in, maybe a couple dots to indicate eye placement and then I sort of tune out and let it appear. I make decisions along the way, certainly; but I often don't have anything in particular in mind when I begin. It's a freestyle thing, improvisation.

Can you practice that? Do I learn anything? I don't know. I might be flexing the same old muscles with 2 pound weights when it comes to improving my drawing.  It passes time, though.

I've noticed improvement in my work when I've spent time drawing from life, from photos, or doing studies of other aritsts' work. I used to believe that making up heads was good for me; encouraging me to invent things and call upon the skills and the knowledge that I've gathered from my studies. I don't know. Maybe I'm just wallowing in the shallow pool of observations I've made in the past.

Anyway. Here are more improvisational heads-- are they worthless? Or maybe they're worth a click and a comment. You decide!

Drawn on real paper with pencils and pens, scanned, and vandalized (colored) in Photoshop! 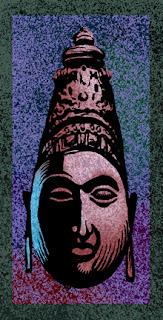 This is an old thing, too. I think it's a study of a stone carving I saw in a book. Couldn't tell you what it is, or what book it came from. Hm.

One of my early texture experiments. Drawn in photshop, no doubt.

I've been drawing lately-- inspired by finally getting a few days off and wandering around Wondercon last weekend. Scored some old beat-up copies of comics I've been pining for, so I'm up to my elbows in inspiration, flavored by Kirby, Steranko, Kubert and Buscema. 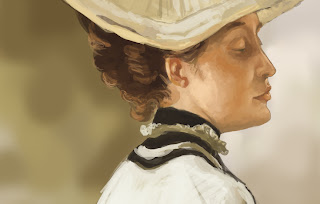 I'm still going through backup CDs and I'm finding artwork I'd forgotten about. Most of these ghastly things will remain hidden, but some will be used as blog fodder. For example:
...This doodle is from 2003 when I was desperately thrashing about, trying to figure out how to paint digitally. I was much more patient back then. This study looks like it was done with care and a very transparent brush, slowly building up the color in subtle glazes. Blech. I find that very tedious now.
...Obviously this was done before I started fiddling around with texture-- maybe I didn't know about texture yet!
...What a rookie. Does her ear look really tiny to you? I think it does.