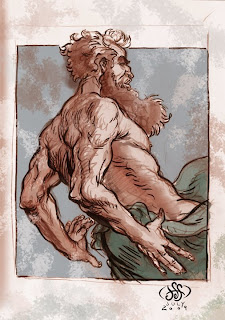 It has been a looong time since I made an appearance here. I have been-- as the saying goes-- very busy.

The workload at my place of employment has been exceptionally demanding and sadly vexing of late; and I've taken on a second job, which is thoroughly enjoyable, but it is close to being a full-time job as well. I don't mean to be mysterious, but more on that in a later post, if I ever get around to posting regularly again.

This drawing is my first spare-time drawing in a month. I was thinking about Rubens, and those grand compositions of bulky, writhing bodies and shapes. Not quite bulky enough but I think my intentions come through! Jacked up left hand though.