Goofing around with Photoshop, Premiere, iMovie, GarageBand and the YouTubes. Whole lotta For Dummies manual-reading going on around here.


It was fun to do this but there was a really crappy lag while filming. (Videoing?) Not great drawings but, of course, I got nervous because I always do when somebody might be watching. I got through it. Hope to do more silly stuff like this.
at 2/28/2017 08:51:00 PM No comments:

Rather than scratch out more head doodles (see several recent posts) I thought I'd do a full-figure character drawing. It occurred to me to illustrate a character from a game I've been goofing around with.

Anybody play "Cataclysm, Dark Days Ahead?" Here is my interpretation of my latest character as he looked before leaving his recently acquired farmhouse to desperately search for pots and pans to cook with. I think he got the purse off of a little zombie school-girl he dispatched, with great remorse.


This is Moses Duvall, and he recently survived a Moose attack. Don't laugh. An angry moose is serious trouble and Moses was lucky to escape with his life. While he healed, he spent several days coping with a nasty bout of the common cold. Then he suffered a serious infection from a deep bite wound received during a melee with several zombies. (That's possibly when he scored the purse.)

Cataclysm DDA is a game I've had on the iPad for well over a year, and only recently have I learned how to make it go, although I'm far from being successful at it.

Mr. Duvall has avoided death for twelve days, game time. In my short CDDA career that's a pretty good run. He spends most of his time dressing his wounds, scrounging for wild vegetables in the bushes, and boiling toilet water to make it safe to drink. Yeah, you have to do that. It's all about surviving any way you can. And run like hell if you see a moose.

Some more little head drawings. All of these were improvised, no reference. 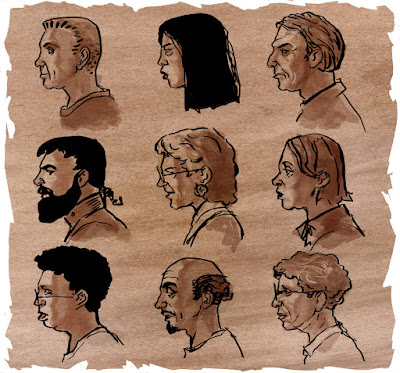 Kind of a cheat to keep the blogposts flowing by posting half-arsed scribbles but it's inspiring me to get the lead out and start drawing in my free time. I'm usually so burnt out from work that it's hard to persuade myself to assume my working pose after having been there for 8, 9, 10 hours already. But I'm enjoying it. Still have to take lots of breaks and I should exercise, too, but it's fun enough that I'm starting to look forward to it!
at 2/15/2017 06:00:00 PM No comments:

This illustration was for an excellent Mercury News Sunday Tech section story by Marisa Kendall. There have been a lot of tech-related privacy/security stories in recent years but – although the details and particulars of the stories change – as an illustrator charged with coming up with yet another image that addresses the core concept, it can flummox creative inspiration. In short: I was stumped.

I envisioned a person, spied on by the various technologies suggested by the story's budget line; nothing interesting occurred to me. I suppose an image similar to the final is what crossed my mind, but with more conventional representations of the person and items. It was going to look boring.

Determined to do this differently, I thought about John Lennon's drawings and drew the figure in a way that reminded me of his work, but when I finished my initial scribbles and then went to look at Lennon's images, I realized I was really thinking about late-stage Picasso drawings; the 50s and 60s era. (Love that stuff and have done work inspired by him before.)

The problem that comes with drawing in an unconventional style – unconventional for me – is I can't tell if it looks right until I'm almost done with it. The design of the person came most easily, but I spent a lot of time fussing with the hand and face relationships. I almost gave up on the idea, but I started coloring him and then it seemed to transform into a design that didn't put me off.

The difficulty I found trying to interpret the iPhone, the satellite and traffic light was in trying to make them recognizable. I abandoned more exaggerated drawings, retreating to simpler representations because even I couldn't tell that my haphazard arrangement of circles and rectangles was supposed to be a traffic light. The objects are therefore simpler, less daring caricatures for the sake of clarity and the usual time constraints.

I'm pretty happy with it, although I felt more like a member of the audience than the performing artist as it all came strangely together.

As another exercise, I created an animated version. I dabble inconsistently with animation, and so I have to relearn lost knowledge each time I wade back in. At work, I'm going to try to translate some of my drawings to animated gifs for the website. This is my first whack at it, but I didn't get through it until several days after the story posted. It was a too complex and improvisational process this time, but I learned how important a clear and simple plan is, even for a fairly short presentation.

Here's another quick batch of head doodles, just to fill the spot for this week. I image-searched for head profiles and drew about half of these from reference, but without trying to recreate the source images; I just riffed on the pictures. Then I doodled the rest out of my head, freestyle.

Still trying to find time and build momentum for doing some comics projects. Hm. I've typed that a few times over the past ten years...

Tweeting His Way to the White House

Here is a full-page illustration/graphic that I slapped together a couple of weeks ago. It is an arrangement of Trump tweets – hand-picked by reporters, editors, me – arranged and illustrated. Confidentially, it didn't start coming together until the final two or three hours. I was worried as I worked on it and the deadline approached.

The general theme we decided on was "From the Trump Tower to the White House," and it was suggested it be done as a game board. I considered and explored using designs reminiscent of "Life, " and "Monopoly but trying to fit the narrative into a board game theme felt forced. It could have been done with wiggle-room for trial and error maybe, but there was only a day or so to get it done.

So, I made a simple timeline of tweets and inserted pictures and a blob-brush twitter-bird along the way. I added the orange toupée late in the process, too; which is why the bird isn't toupéed in every instance. I didn't have the time or the energy to crawl back in and add one on the scalp of each bird.

It's fun, and kind of cute, if anything Trump-related can be cute.