Harassment Under a New Lens

This was a late-breaking, quick-turnaround illustration for the Sunday edition of the Bay Area News Group family of newspapers. I kept it very simple and was pretty much done in just a couple of hours. The story by Kay Murphy and Thomas Peele is at this link.


The illustration was requested and I immediately cringed at the notion of having to come up with something for a story about sexual harassment. Topics of that nature are extremely tricky to illustrate in a way that will avoid offending a lot of people. I resisted and tried to wriggle free of it. An illustration about sexual harassment that will run on the front page of a respectable newspaper is too fraught with danger.

When it became clear that it couldn't be avoided, I consulted with colleagues and we all squirmed uncomfortably.  Since the story hinged on an incident involving a professor of astronomy I opted to focus on that aspect, and this idea occurred to me when I looked at an image of a large telescope.

I'm pretty happy with it. It's kind of cute, but not too silly; or, perhaps, it's a little silly without being too cute. Or maybe it's both of those things, but it was the best I could come up with. Yeah, that's probably it.

Page designer Chris Gotsill got ahold of it and made it look very nice on the page. 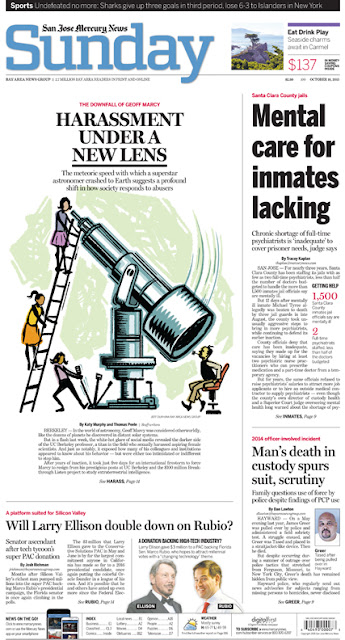 I haven't heard that anybody complained, so I think I got away with it.

My ideal job would be to paint and draw for (bad) 1940's and 50s era pulp magazines. There are days when I think the best art of all time appeared in grotesquely vivid color on the covers of the pulps. Today is one of those days.

Back in the late 80s, it was pretty clear the sci-fi, fantasy, detective and western pulp magazine business was near death, but I hoped that it would last long enough so that I could score a cover painting or an interior pen and ink drawing for publication, just so that I could say that I did it. Never happened.

So, every once in a while, I hop the trolley to the land of make-believe and pretend.

.
I've had this notion to create my own e-zine of goofy science-fiction stories and artwork, and maybe I will get to it someday but, until then, I'm going to try to create more art like this because it's great fun. The grind of work has been getting to me and this reckless creativity has been refreshing. I think it's good for me!

Below is the painting without all the annoying type.