I thought it would be fun to draw cowboys. Pay no attention to the pirate-looking fellow with the uzi, he popped in uninvited. I was coloring him before I realized he was a crasher.

The pirate and the sherriff are drawn freestyle, the two guys and Roosevelt were drawn loosely from photographs. President Roosevelt I deliberately started with the intention of not attempting a likeness, but instead simply capturing the attitude of his pose. Having failed that, I took pains to make his face look a like the photo so that there was some merit to the excercise. I may or may not have succeeded in that effort so I wrote his name along the bottom of the picture to avoid any confusion.

(When I was a child I made it a habit to provide a label of the things I drew pictures of. If I drew a picture of my father I would write the word, "Dad." If I drew a truck, the word "TRUCK" was written below it. Spider-Man would be clearly described in a word balloon as "Spider-Man." I found this eliminated the awkward moment when an adult was not sure what it was they were looking at. A wrong guess could be painful. "No, Mom! That's not Superman, that's Spider-Man!" Ugh!

Thus: "Theodore" across the bottom of that drawing. So we-- you and I-- do not have one of those awkward, painful moments. (I'm considering making this a regular feature of my artwork.)

Drawn on paper with pencil and pitt pens/brushes, over-texturized and colored hastily in photoshop.

Had a pip of a week and didn't get a whole lotta drawing done. I have a couple of things almost finished. . . but they aren't; so, I'll post these character drawings instead:

These were designed for a board game that's coming out pretty soon; I also painted the box cover, created a few more characters like this, and drew a slew of b&w cartoons for the cards used in the game. I'd point you to the website but I'm not sure if it's all ready to go yet and I haven't received permission. I'll just say that it looks pretty cool and I can't wait for it to come out.

Today I cleaned off my desk, pulled out a sketchbook, a pencil, a couple of pens and I drew these guys: 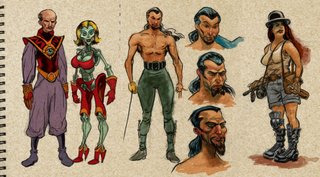 No rhyme nor reason to it, I just wanted to see if I could sit down and crank out a few characters.

The two on the left are based on a little painting I did of a Mad Scientist and his Robot-Bride. It was just a head-and-shoulders doodle of a guy who looked vaguely like Basil Rathbone next to a bosomy robot. I've been wondering what the rest of them might look like and now I know.

The guy in the middle is pretty dull. My working name for him is "Guy with ponytail wearing pants." Not a lot of clever design going on there, that's for sure. I thought it was pretty a pretty lazy effort so I forced myself to give him some alternate heads just to add a little to the presentation. I like #2.

Gal with a derby and a tommy-gun. Eh. S'alright.


p.s. Hey, I found that mad scientist painting on my website-- I don't remember putting that there! Here 'tis: 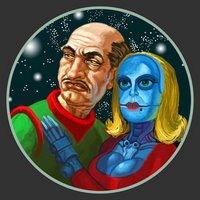 All pets go to Heaven 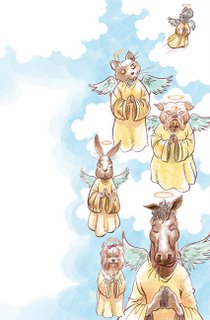 New thing done for a story about current trends in how we give our pets their final sendoff. It will run in over the weekend in the Oakland Tribune and the rest of the ANG papers.

This one was unusual for me in that I drew & inked the characters on paper instead of straight into photoshop. I've been having shoulder pain for the past half-year or so and I think that working all day in front of the computer with my 4x6 wacom has contributed to that. It isn't as bad as the wrist problems I was having working with a mouse but I often come home and work a few more hours on my own stuff-- that's probably been my problem.

So, in the interest of staying healthy I've been working the old fashioned way for my latest projects at work and it seems to help a bit. It's even kind of fun. But I'm not used to this buildup of pencil lead and ink-spots on the side of my hand– I've got to learn to stop wiping my brow with that stuff.

It seems that when I wasn't at work or sleeping, I was cooking dinner, doing the dishes or taking care of laundry. On one of my days off, as I lounged and waited for a load of clothes to dry, I dozed ever-so-slightly and had a dream about a drawing I made a long time ago, which looked like this, but without the eyeball cat. During that doze, however, he was there with a toy mouse. I bloodied it up just because. 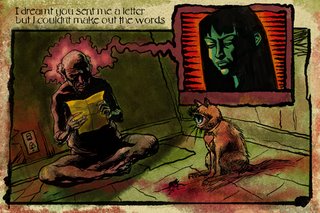