While she naps, I paint a quick impression of the daughter. Unintentionally kind of spooky. Oh, well.


Haven't painted in a long time. Maybe the picture isn't so hot, but it sure feels good to do it.

On a Wednesday evening, in haste -- for the end of shift was near -- I doodled this thumbnail after a brief brainstorming session with the art director and page designer. I submitted it to the editors for approval and went home.


Whooosh! That was pretty quick. I spent another 40 minutes tweaking it for two online presentations, changing it from a vertical to a horizontal design, which necessitated a little more drawing, but I'm not counting that!

Here is what it looked like in the paper after Daymond Gascon put the page together. He made it look nice, didn't he? 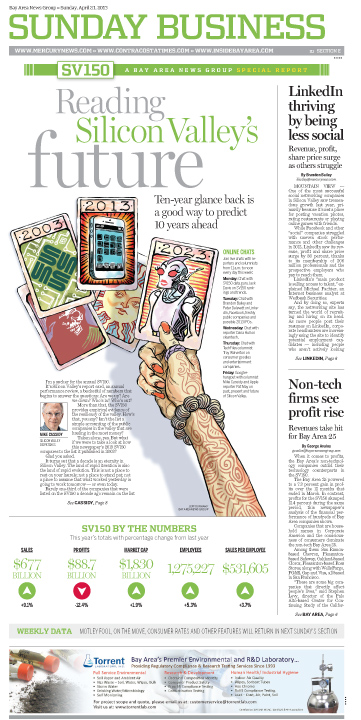 And here is the link to Mike Cassidy's excellent story.

Here's my effort at an illustration for Jim Harrington's fine story about concert ticket prices. If you read the story I must warn you that the next time you exit the subway and pass by that old guy sitting on a bucket playing an erhu, you might feel compelled to drop at least a 20 in the cup. After all, you're getting front-row, v.i.p. access to live music performed by someone over 70.


Below are four screenshots of the illustration in progress.

Top left: My rough idea sent to the editors for approval. A hopefully amusing play on the audience-raising-lighters-at-a-concert shtick, with one guy in the foreground burning money representative of the amount of a ticket. The editors liked it, but wanted more people burning money. Dang. That means drawing more hands doing different things.

Top right: Mick and Keith line drawings -- at this point I wasn't crazy about Mick's likeness, but I hoped to fix it during the coloring process.

Bottom left: I started filling in the flat colors behind the linework after the long slow grind of drawing hands. I had also drawn hands holding money, but they were on hidden layers; I kind of preferred the visual joke of having just the one pair of hands lighting the money, and kept this as an option in case it was later decided to go that direction.

I did re-use a hand or two, but redrew a few fingers on each so it wasn't so obvious.

Bottom right: Here the rendering began. Mick's face started to look better after this, although I'm still not happy with how the final looked, but deadlines will be deadlines. At the last minute I decided I didn't care for the big, bare fore-arms right up front, so I put some sleeves on them, probably with a bit too much haste. The coloring helps, but they look more like tubes than sleeves.

Also, at the very last minute I put frets on Keith's guitar. No time for strings, tho!

And here is what it looked like in the paper, on a page designed by Scott Swyres:

"Over thar! Off the port bow! He's posted an artworks, laddies. How can he have stayed down so long? Is he breaching? Is he going to thrash the ship with his mighty tail? Or has he expired? Mayhap he is merely bobbing to the surface to show his belly to the sun and feed the gulls."

I am still in the cold, cold grip of a monumental art-slump. I haven't scribbled anything of merit since my last post several weeks ago, and I won't insist on the "merit" bit if you feel differently. Still, I have hopes. I will be off of work for a few days and I have aspirations and I have a pencil. That is all an artist needs, right?

In the interest of keeping the blog floating -- be it belly-up or not -- here is a small scan of a mid-90s acrylic painting I did on the cover of a small 3x5 sketchbook. That should be enough for at least one gull.