An Orange Or Maybe A Tangerine, I Guess

I am working on updating my website, and learning about starting a page for my artwork on Facebook. I've decided it is time to totally get on board with the social networking junk. No more frittering around. Yup. Right after I finish this little doodle... 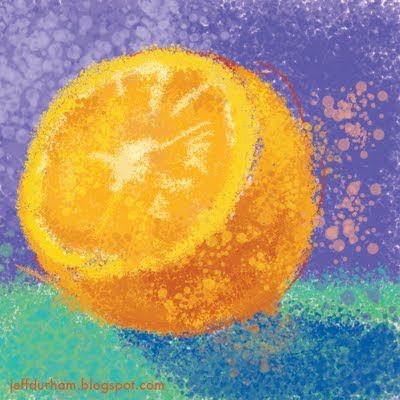 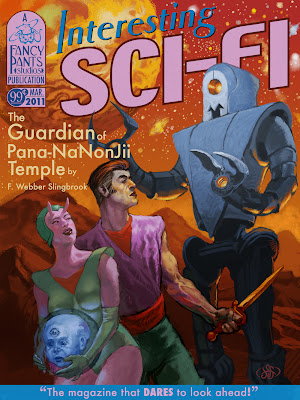 Shortly after posting the exploratory roughs for this piece, I decided what I posted wasn't very good. I almost dumped the whole idea. But a couple of people bothered to comment, so I felt like someone was watching. Had to follow through.

I don't know if this improves on my original ideas, but I had great fun. I really enjoy this nonsense. And the research is the best part. It's a joy for me wander the web and take in all those wonderful collections of classic science-fiction magazine and novel covers. It tickles my eye and I like nothing better than having my eye tickled; it improves my energy and my disposition.

I started typing an excerpt from F. Webber Slingbrook's featured story, but I don't think I'll have the time to get very far with it. Maybe later...

Any comments, criticisms and wise-guy remarks are welcome.

I should note that I don't quite know what it is the guy is wearing. I put it on him and he seemed comfortable with it. 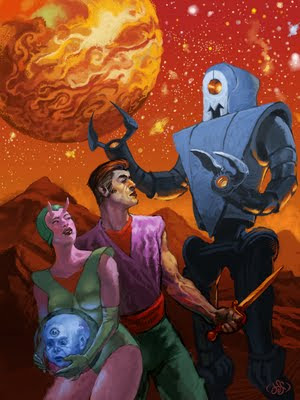 Way too cute. I didn't think it would be this cute, but it is.

I feel this illustration is an example of failure by impractical expectation. I had this vision of about 30 or 40 people on the San Francisco side laughing and dancing and having a great old time. I envisioned a Golden Gate Bridge, a Palace of Fine Arts and maybe a Coit Tower in there. Alas, time ran out on me, but only because it was a bad idea to begin with.

I had the assignment a month in advance, but the time to work on it never materialized. Too ambitious. I should know better by now. I didn't have a clear design plan until two days before it was due and I think about 70 to 75 percent of the drawing/coloring was done in the final 24 hours – I can work fast; I'll give me that.

I think this is a case where an audience can perceive what I was trying for; what I was hoping for:

"Hey, this guy is doing one of those map illustrations with cartoon people and cartoon landmarks. Those are cool! But, well, I only see Treasure Island and the top of the pyramid, though. Oh, and a cable car. Is that supposed to be Tim Lincecum? Bleh. Jeez, this isn't very good."

Yeah, yeah. I know. I'll try to do better on the next one. 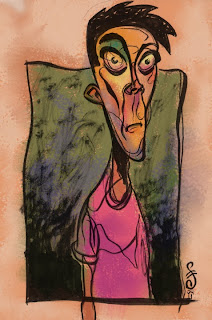 I put this up because it's slightly embarrassing.

It is here to motivate me to create better stuff and post it quickly, so that this one slides way down the page, into oblivion.

Bleh. I'll get to work right away.

Click on "Bleh" below if you agree with me.