More than just the name of a man, Vida Blue is a pleasant three syllable incantation that revives and resurrects early memories of watching baseball games with my father on a small black and white television. I was a seven-year-old baseball fan, and the early 1970s Oakland Athletics' cast of characters was a roll call of strange and catchy names: Vida Blue, Rollie Fingers, Catfish Hunter, Blue Moon Odom, Sal Bando, Reggie Jackson.


I suppose Reggie Jackson might sound pedestrian compared to the others, but he was such a great character and such a great player that "Reggie" became a name of royalty, and achieved an other-worldly mythic resonance.

The A's were a big deal when I was in elementary school. World Series champs three years in a row, and Vida Blue was my favorite, probably because he threw lefty like me.

I've contributed illustrations to the annual baseball magazine several times – The Mercury News baseball season preview mag – but this is the first time I felt personally connected to the topic. I was given a choice of stories to illustrate, but the instant I heard "Vida Blue" it was settled. I didn't even want to know the hook of the story, I was in.

The story's hook, though, helped me figure out what to do. Vida Blue Hit the Big Leagues in 1969 with the A's and served two stints with the San Francisco Giants, ending his career wearing the orange and black in 1986. Seventeen years, he pitched. Six-time All-Star, American League MVP and Cy Young winner in '71; he was the youngest American League player to win the MVP in the 20th century.

I didn't have all of that off the top of my head; I had to look it up. But personally, although the stats back up my impressions of him – his greatness as a player cannot be doubted – it is the sound of his name and the pleasant memories of watching the A's broadcasts with Pop on Saturday afternoons that I remember.

Made this silly little drawing for the Mercury News sports section. It ran in print and online today, March 8, 2018. You can read the excellent story – written by the excellent Melissa Rohlin – by purchasing an archaic (or "retro-cool") printed-on-paper newspaper facsimile of the Mercury News or The East Bay Times at your local newsstand or – if you have no idea what I'm talking about – just click this link here!

It's a nice story about a couple of famous sports figures who, by all accounts, are pretty good guys, too. 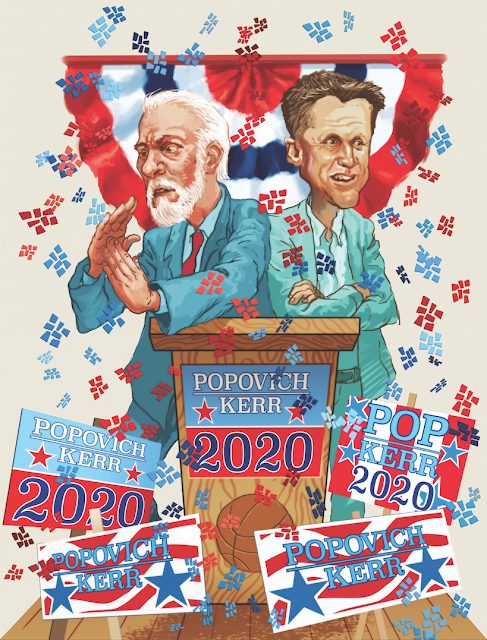