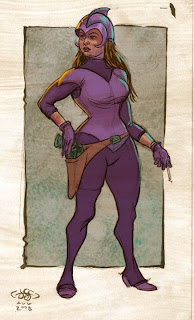 About four months ago I made a post about how I was really keyed up and ready to start a short sci-fi comic (Here, if you would care to read something that came to nothing.)
...I have not had the time to make an aggressive effort on that project. I did one page and found I didn't care much my drawings. The story -- which I have not written down but has been growing in my head -- has spun all out of control. I wanted to do a short thing but now it looks like a five-act epic that would run about 1500 pages (not really, but you know what I mean.)
...I didn't have a definite vision for the appearance of the woman in the story, therefore I spent a lot of time erasing and re-sketching and then erasing again, trying to figure out who she was. Amateur mistakes, one after another, as if I didn't know what I was doing. I don't, I guess. And this was only four panels in on this mess!
...And, as I said, I'm not finding the time to get after it as I would like to.
...But, a couple of weeks ago, I decided to do a few drawings of the woman until I had her down. Here is the one I liked the best, although the holster was a last-second addition and ain't quite right. And her left shoulder appears out-of-socket and the arm is too long and generally looks jacked-up. Oh, well. Back to the drawing board. 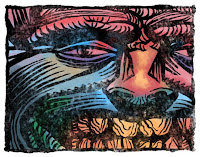 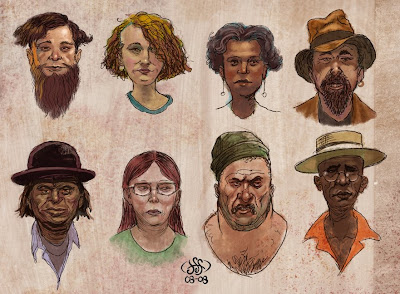 Here are a few heads to look at. They were casually doodled on Saturday morning as I idly sipped on a couple of coffees -- 'casual' and 'idle' are two words I am going to use when I get around to crafting my personal motto.

I calmly scanned them on Sunday morning and haphazardly colored them, in hopes of making them look much nicer than they are -- 'calmly' and 'haphazardly' are two more of my motto building blocks!

No reference was used nor was there a clear intention for any of these as they were created, although I was thinking about a guy I saw sitting in front of a Starbucks when I drew the top left head-- and it kind of looks like him. Otherwise, they're all freestyle.

Couldn't Stop Scratching While I Worked 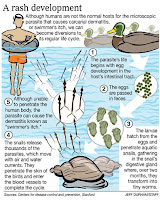 Another infographic, done in just a few short hours with a heavy deadline atop my head, wrinkling my brow. I would have preferred to do graphite drawings and colored them in Photoshop – to bring a little more delicacy to it – but I'm happy with how it came out.
...Perhaps it leans too heavily to the cartoony side but, when I'm in a hurry, my work kind of flows out looking like this. And since it's about a parasite that is not life-threatening I figured I didn't have to be completely dignified. It's running on the front page so size was a major issue -- meaning "keep it small so we can fit it in" -- although that goes for every page, these days.
...Crafted by hand in Illustrator.
The End.
.
at 8/15/2008 11:04:00 AM No comments:

(To be read aloud, with deep voice and a cowboy accent. Excerpted from "Quick Draw Pete's Bloody Revenge," a one-act play by Fontaine "Colt" Sneckler, 1954.) 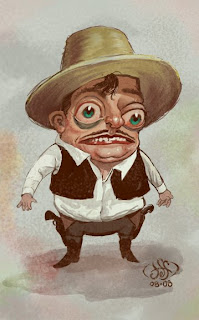 ...Many are the tough-minded hombres who have laughed at the fiesty fellow from Injun Meadows Gulch. He is a peculiar sight and might bring a chuckle to the throat of the uncouth cusotmer who finds humor in the unusual characteristics of others.
...He is tense and walks stiff legged. He speaks in a high, shaky voice, slurring his 's' sounds. He blinks a lot and so dense and so large are his eyelids that you can hear a tiny, wet sound when upper lid slaps lower.
...That might seem funny to folks who don't know about him and, like I said, many are the tough-minded hombres who have laughed. Yes, and a good number of those hombres are rounding up cattle for Jesus.
...Laugh too hard and he will call you out. "Shay your prayersh, varmitt," he's been known to say. And that is how it goes.
...He faces you and waits until you are ready. Still and stiff he poses like a statue, chubby hands out and over the butts of his six-shooters, a fierce grimace draws the corners of his mouth down. Silent he stands, save for the tiny lip-smacking sounds of his blinking.
...When you are ready-- your belt tight, your holster tied down, your hands poised to grab iron-- he stops blinking. He stares at you with those eyes, and you know they see all and they are just waitin' for your hands to move, or even twitch. Suddenly, he ain't so funny anymore.

Study of an Anders Zorn painting. Started it the other night and tidied it up a bit this morn. Tried to limit myself to 20-25 minutes, but probably cheated to the the tune of about 35 minutes total. Photoshop!
...I'm not particularly proud of this, I just feel like I have to post something to keep in the habit; to keep the pressure on. If there's a crummy little painting at the top of the blog it motivates me to do another crummy little something to push this further down, below the fold.
at 8/07/2008 11:54:00 AM 1 comment:

Here is an infographic I did a couple of weeks back. I seem to have mislaid (trashed?) the final version during my tidying up routine, but this is pretty darned close to the one that ran. I started with two separate graphics. The flashover segment, occupying the bottom tier, was a one column vertical, while the portions above were designed for a two column presentation. The King of Graphics Department, Chuck Todd, terrific designer, artist & illustrator supreme -- and occasional heartless villain -- decided it should be a four-column thingy. Great.
...Well, it turned out he was right. I had to do some serious re-thinkin', re-tweakin' and re-drawin' in a flippin' hurry, but the end result sure looked better. C-Todd's design savvy and his infographic instincts are the reasons why he will probably be laid off shortly after I'm laid off. (That's newspaper biz gallows humor-- if you make your living in the industry then you know!)
...I worked on this piece in conjunction with a monstrous time-line/sequence-of-events that was mostly type and far too unwieldy to show here, but the entire project required extensive research and countless readings of a 150-ish page report of a response to a fire alarm that went tragically, sadly wrong. It was intense and moving work.
...Of course, in regards to the art, I'm not at all satisfied with it now. The flashover section in particular makes me cringe. As far as I'm concerned the art in that is still in the rough sketch phase; I intended to do a better job. For the last panel, I scribbled recklessly just to get the idea down, thinking, "Eh, I can come back later and polish it up."
...Hm. That phrase runs through my head far too often as I make my way through life. "Eh, I can come back later and polish it up."