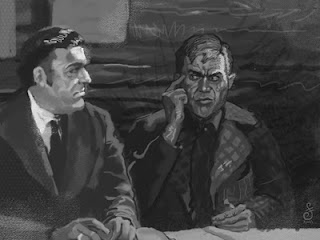 Another study. This is taken from "The Gold Rush." It's probably my all-time favorite movie. Well, that changes day to day, but it's always in the top five.

These are the two guys in the assayer's office where Big Jim McKay goes to stake his claim, but he cannot remember where it is. I should have gone color with it, just for the exercise, but I'm a little on the lazy side today.
Next one!
at 9/28/2011 12:24:00 PM No comments:

I love a good mash-up. Or is that "pastiche?" Whatever.

Sherlock Holmes crossing paths with Dracula? Awesome. Tarzan off on an adventure with Indiana Jones? I'd watch that. The Three Stooges meet Vincent Van Gogh and try to cheer him up? I am so there. 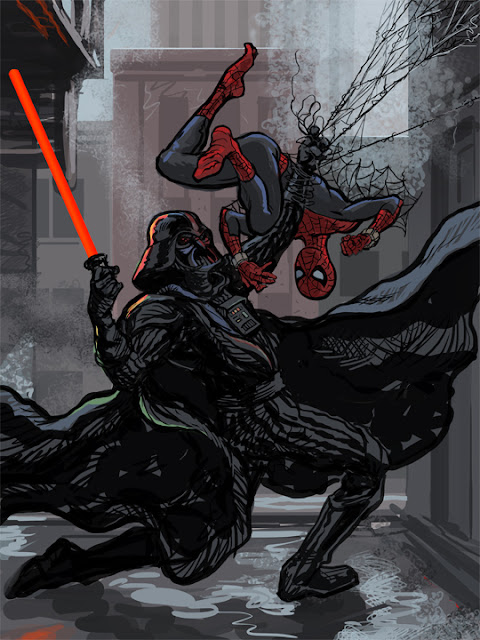 I'd buy this comic, or watch this movie. But for the moment it is merely a hasty scribble. I painted a background just now because it needed one.

Here are a couple of digital paintings for an infographic that will run in most of the Bay Area News Group newspapers this week. We have a duck (a greater scaup) and a fish (a sturgeon.) 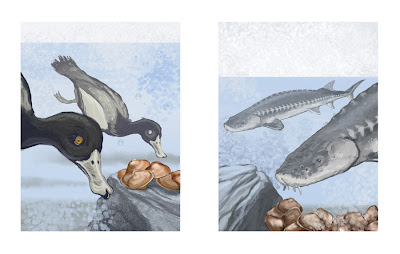 Oh! And clams! Painted in Photoshop!

I'm revisiting this post because it has received a rash of hits lately. I don't know why, but since it's been getting so much attention -- a lot more than anything else I've done lately -- I thought I should say something. The original text was a bit goofy, complained too much about my job and hadn't aged well at all; so I might as well drop by, say "Hi" and improve the reading a bit.

What I didn't mention in the original post was while I worked on this illustration, I learned that I was going to be a father. When I first read the story and began the rough I thought "What a bunch of dorks. Men don't have diaper parties." By the time I was coloring it, I was thinking, "Who could I invite?" 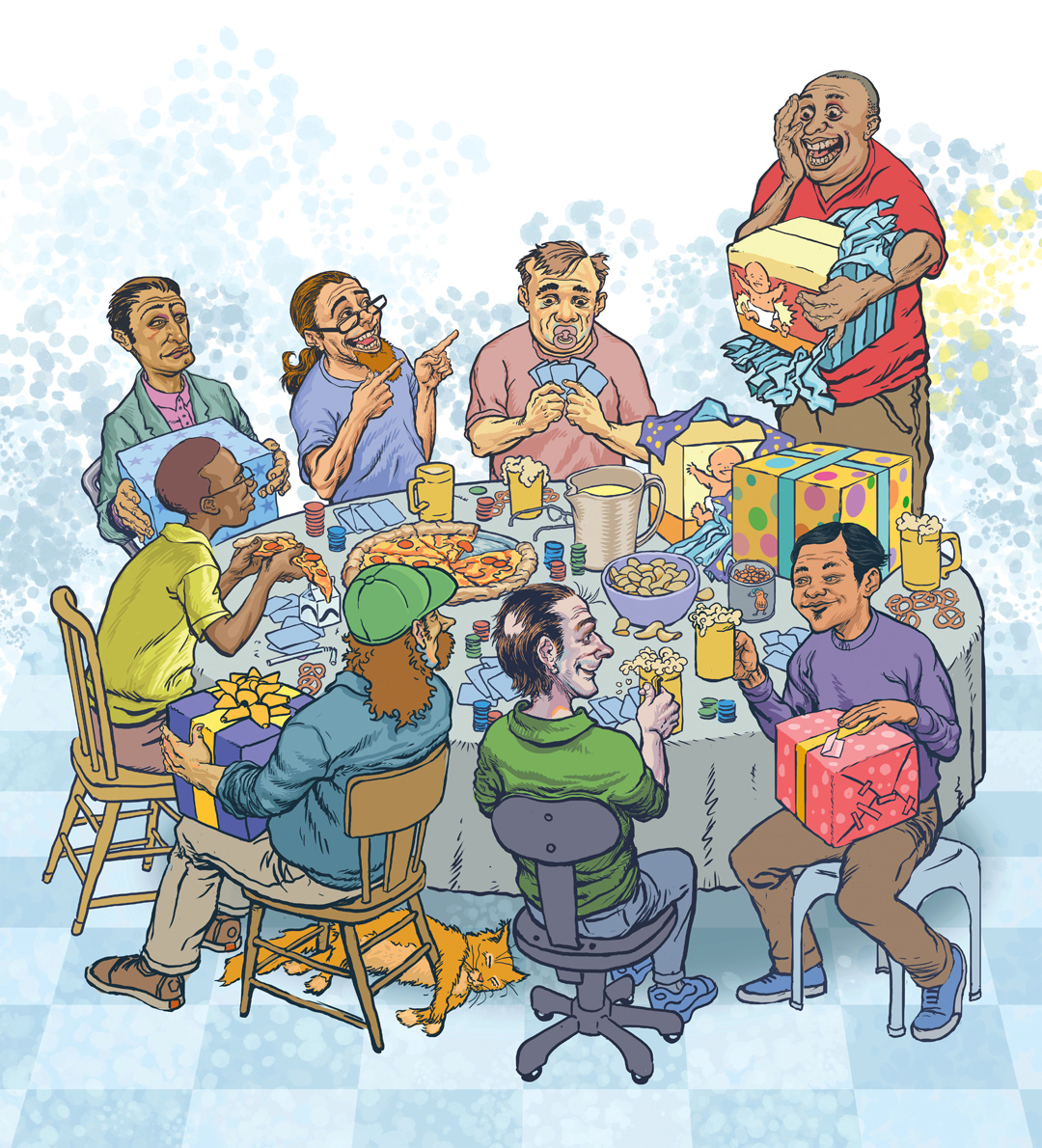 The old post had this paragraph to describe what was happening in this picture:

"What's going on here? There is a growing trend among men to have "diaper parties" for new fathers. It's the usual gathering of guys, but everyone brings diapers. I know; I've never heard of it either, and I don't believe it! I've been assured it's true, and yet still am I skeptical. But skeptical or not, I have a job to do!"

Dismay and skepticism turned to acceptance and inclination all on account of a little sonogram. Well, I never had a diaper party, but I sure could have used one.


I probably didn't think much about the style of illustration and just went with my natural Jack Davis wannabe look and kept drawing until the deadline stopped me.

Drawn and colored in Photoshop! 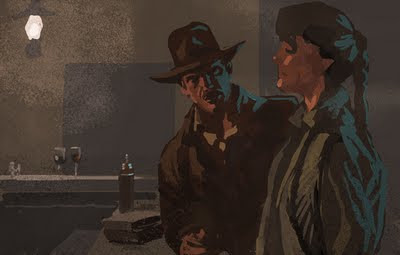 Yup. Another study from a movie still. Started around 11 pm after a long day. Finished midnight-thirty or so. 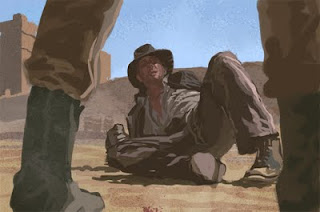 Are these doing me any good? I think so.

I'm enjoying the slow awakening of some skills that I have not exercised in a long time. And I'm filling up the blog at a pretty good pace, too. But that's only because I'm liking it.

Came home after work, had a bite to eat and then spent about an hour and a half playing around in Photoshop. This is what happened. The figure is referenced from "Once Upon a Time in the West" (Claudia Cardinale. Hubba hubba.) The background was referenced from a different scene, but that wasn't working out well, so I ad libbed it. Doesn't look right now, either; but I'm tired and going to bed.
at 9/07/2011 11:41:00 PM 1 comment: 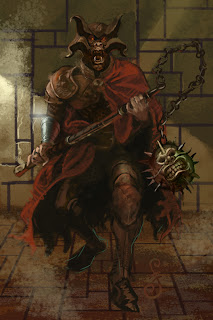 I found this old character doodle. It was unfinished and it didn't look very good. When I saw it this morning I liked the spikey head/ball on the end of the chain. I re-worked the rest of it, and it still isn't great, but here it is anyway.

He'd be just the kind of guy you'd find in your dungeon monster manual. "This beast roams the lower levels of abandoned dungeons. They tend to travel alone and because of their great strength and frightening roar, they will attack small groups of travelers and adventurers without hesitation. They are of low intelligence and maybe that's why they hold their maces as though they were guitars."

Another Study From a Screen Capture

Until I did the painting for the previous post I hadn't done a study in a long time. When I was in my 20s, I drew and painted from life or from photos almost every day. But I've been out of that habit for what? 15 years? That long? Sheeoot.

Well, I had so much fun working on the previous post decided to do another one. I would like to make this part of my routine and get back into painting-shape. It's harder than it used to be, but I can beat that with practice!

I've grown tired of typing "I haven't had time to do any art lately," so I got up extra early and started on this study. Then I came home from work and hacked away on it again. I probably worked it too much -- I liked it a lot better about twenty minutes before I "finished" it. But there! I've finally done something.

This is referenced from a screen capture of "Once Upon A Time In The West." It's a very dark and heavy film by Sergio Leone -- I believe it was his last western. Good stuff. Charles Bronson is our hero and the villain is Henry Fonda. You'll never look at Fonda the same way again. Meanest, cruelest, most despicable bad guy in any movie, ever.

Well, maybe not ever, but you won't believe the horrible things Henry Fonda does. I can't even tell you because you wouldn't believe me.