This is slightly belated, but: The Golden State Warriors are the champs! Again! It felt weird typing that the last time (a couple of years ago) and it might be even more bizarre now since it looks like it could be an annual occurrence. The past few decades have been grim for those of us who have a sentimental attachment to the ancient days of Clifford Ray and Rick Barry, or the exciting years spent with Run TMC. I don't follow the NBA like I used to but it's cool to see "Golden State Warriors" and "champions" in the same sentence.

We won't mention what happened last year, tho, 'kay? 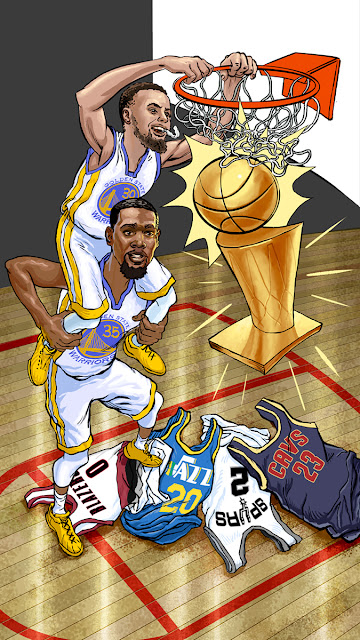 When it became a distinct possibility that the Warriors might sweep their way through the playoffs, I started to work on this illustration, but it looked like the image below. 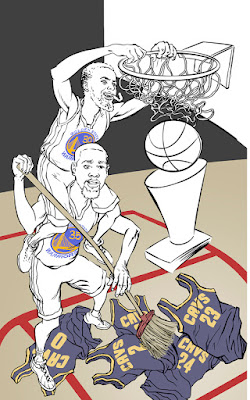 It became clear halfway through the fourth quarter of game four that LeBron wasn't going to let such a historic feat happen on his watch; and that was a bit of a relief for me, since I would have had to finish the illustration by the next day for use in the Sunday publication.

I used the extra shift to re-think it a little bit, and to focus on coloring, which is the most time consuming part of the drawing process, in most cases.