Let Us Finish This Damned Thing!

In early 2008 I bought a small sketchbook intending to fill it with head studies. I misplaced it after several months and two or three dozen drawings. A year passed. In late 2009 I rediscovered the book, promptly drew one head (very poorly) and placed it on a high shelf in the closet. The world whisked around the sun a time or two.

In 2011 the book came out from hiding and – again – I drew a single head. It was better than 2009's solitary effort but not by much. I must have been discouraged. The book settled back in the closet, out of plain sight and easy reach. Like Van Winkle's eyelids, the cover shut and did not open for a very long time. 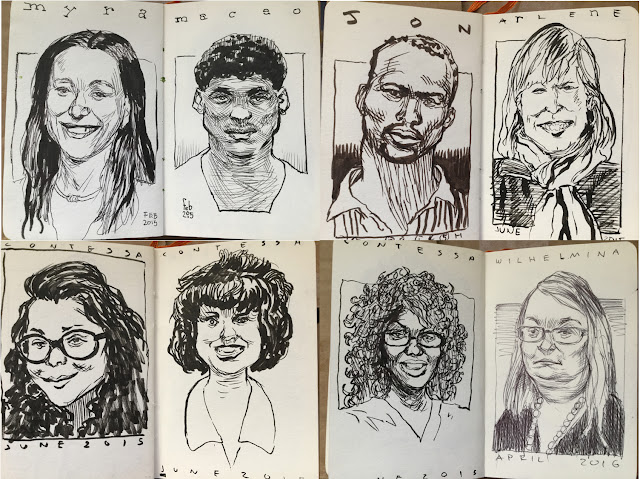 In 2015, February marked yet another rediscovery. The tiny sketchbook had completely fallen from memory and was such a surprise that it prompted a blog-post where I spouted off about how this time I would see it through to the end; but a measly four drawings were all that I generated, two of which appear here. March contributed one half-assed effort – that would be Jon. Jon wouldn't be joined by Arlene until June but she was followed quickly by three Contessas.

Today, ten months later, the book is back in play. Wilhelmina was drawn this morning. I'm about 1/3 of the way through the book.

Enough! I'm not putting it back in the closet. I'll never learn to draw at this pace.