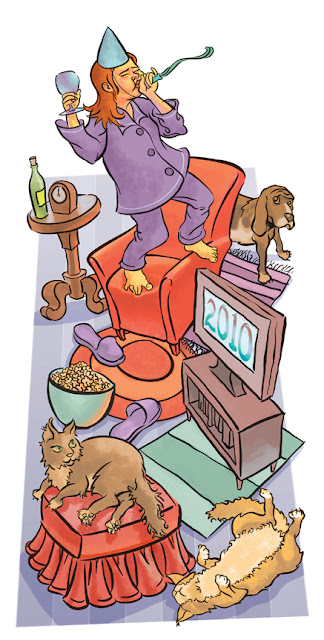 Here is the final, as seen in your Bay Area News Group newspaper on the 28th of December (2009.) I pulled a switch on the chair dancing character, turning him into a her. I don't know why-- maybe I was gender-matching the writer, Jessica Yadegaran. I didn't do that as a conscious decision, but I have done that in the past.

After "inking" the rough in Illustrator, I took it back into Photoshop and colored it. The inverted cat I sketched in at the last moment, just because the spot looked bare. Both cats were inspired by my two feline pals, Mr. Riggs (23 lbs., fond of resting on the ottoman) and Quincy (20 lbs., often found in the lower-most pose.)

Looks like my post-count dipped a bit this year. That's disappointing but understandable. I've taken on a second job, and the time available for creating artwork for myself has been crushed. I do hope to fix that in the months ahead.

So long 2009, you malodorous wretch. Hello 2010, take off your shoes and make yourself comfortable. Here's a cup of coffee and a donut. There, isn't that nice? Let's just relax for a year. I'll put some Jelly Roll Morton on the Victrola/iPod and you can kick back in that soft chair and read some comics. There. This is how it should be. No sudden movements, please don't touch anything, and we'll get along just fine.

As I mentioned in the previous post, this illustration pertains to a story about avoiding the crowd scene for New Year's Eve. The rough I posted was a painting done very quickly in Photoshop. It was an effort to nail down shape and content, and I didn't stray from that first brainstorm as I pressed on, as seen in these two examples. 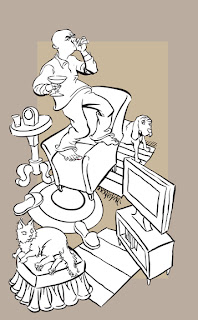 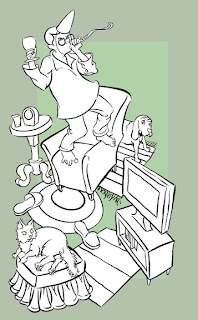 ...I switched from a Photoshop-painting to Illustrator-inked drawing to make this a cleaner, easier to read cartoon-style presentation. I tend to go light and fluffy and easily digestible for my newspaper work-- it seems to go over better and I don't have to worry too much about perplexing the readers. I also prefer not to distract overmuch from the text, as a consideration for the writers.

...I don't want to give the writer anything to worry about when I work with them. I understand it could be jarring to have a hideous cartoon or painting sitting next to your carefully crafted story. 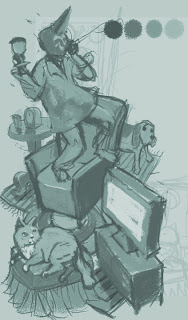 Here's the rough for an illustration I'm doing for work. The story will say, "Hey, it's okay to stay home for New Years Eve. You don't have to get dressed up, get drunk and kiss other drunk people you don't know!" Although that sounds like it could be fun. But the idea is, "You can stay home and have a good time, too!"

Alas, my New Years Eves look more like this illustration, only without the festivities. Actually, I'm usually 10 winks into the needed 40 by the time the old year fizzles and the new one pops. It's been so long since I was awake for the changing of the year that I've forgotten what it looks like.

As I keep mentioning, I've been too busy to draw. It's been MONTHS since I've done anything of substance for myself. I doodled a few heads in October, scanned them, and they've been rotting on my desktop ever since. Once in a great while I took a moment to stain one with color, but only tonight did I completely fill them in. 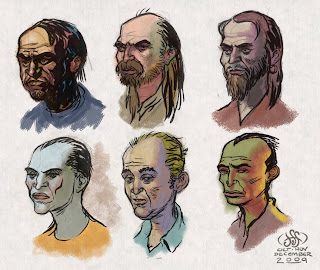 I was going to write a short blurb for each head, perhaps inventing a name and brief history for each of these fellows, but it might be months before I'd finish that chore. So, here they are. Such as they are.