Warriors Fans and a Personal Lament

I created this illustration back in 2002 to accompany a story about the tortuous plight of the Golden State Warriors fan. Things sure were dismal in '02, weren't they? Hm. Hasn't changed much, has it? I suppose there was one happy bump in the road -- their solitary playoff appearance and celebrated ousting of the top-seeded Mavericks -- but that has been the only moment of joy in nearly two decades. 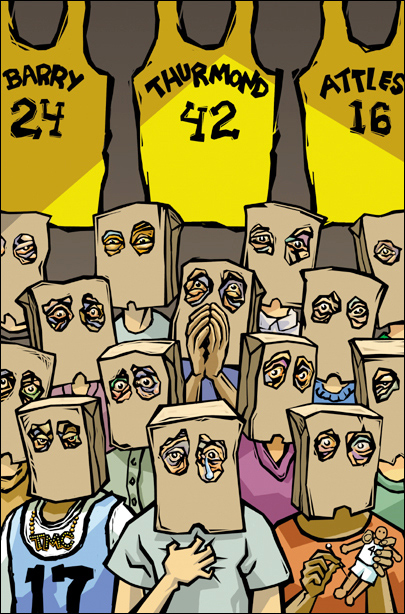 I enjoyed the Richmond/Hardaway/Mullin years -- I've never seen a team that played such a lively, watchable brand of basketball. Lots of scoring, lots of running, flashy plays, crisp passing... just a great, great time to be a fan. I concede they didn't go very far in the playoffs, but they were in the hunt every year and they were always fun to watch.

Tim Hardaway is my favorite ball player ever. Bar none... except maybe for Sarunas Marciulionis, who had the same kind of gimme-the-ball fearlessness that Hardaway had, but without the grace.

When Sarunas came off the bench it was like he had just snapped the leash that had been holding him there; he was a shooting, passing, fouling tazmanian devil from Lithuania. He left teethmarks on the ball and spittle all over the floor, and somehow he'd have 6 fouls and 28 points before they'd catch him in a net and drag him back to the bench.

After the Chris Webber/Don Nelson fallout, it was over. I stopped watching the Warriors and I haven't had the stomach for them since. Boring boring boring. I started to get interested when they showed up in the playoffs, but they fizzled before I fell in love with them again.

Fair weather fan? Maybe, but they made me one.

And on that cheerful note, let me say that I had fun doing this illustration! I remember working on it, and I was feeling it! I still had a strong affection for the team and absolutely HATED what they had become.
They were GREAT! GREAT, I tell you.

This is the onset of my cranky-old-man-phase, and I'm ready to embrace it. Things WERE better when I was a kid. You don't know! You weren't there! You and your fancy LeBron and your little iPods. There's nothing you've got that compares to Larry and Magic, nothing that compares to Hardaway and Marciulionis, either.

This is bizarre, but... yes! I did this. Don't believe me? I don't blame you. It looks like it came from someone else and I am lying about it being mine. But unless you can prove I'm lying, this is my work. 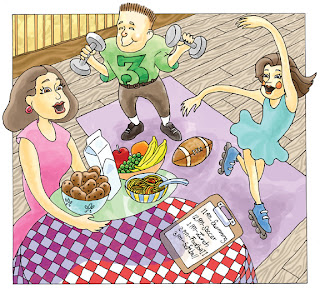 I'm not too clear on what the story was about. Perhaps it was a "soccer-mom" thing. Maybe it had something to do with diet? This I offer because the food seems to be the center of attention in the composition... and as I type that, it almost rings a bell. Pasta, milk, fruit, potatoes... potatoes? Does that seem like a good mix of foods? I'm not a dietitian by any stretch-- I'm a pizza and pop-tarts kind of guy-- but that looks weird to me.

Stylistically, I was obviously trying to do something "different." Was it my idea, or was it done at the urging of an editor? Couldn't tell you. This is about ten years old and the clarity of my memory fizzles out about three hours into the past.