I drew this a couple days ago; tweeted it, tumbld it, google+ed it and that was going to be that. I have a work-related, fancier illustration to post, but the publication date has been postponed so I can't show it here yet. In the interest of freshening up the blog, I'll slip this quick doodle in while no one is looking.

I was sitting on the floor in my daughter's room while she was drawing with crayons. Since she was so studiously making marks on paper while I sat idle, I stopped goofing around on the internet and did a quick sketch.


.
I've flaked when it comes to drawing on the iPad, mostly because I can't stand drawing with my finger. There's something about the friction on my fingertip that drives me nuts! But by not drawing on the tablet, I'm neglecting the main reason I wanted an iPad in the first place.

I've had a few styluses in the past but they don't seem to last very long. I just found another stylus that has a tough looking tip. It's finicky and doesn't register on every stroke unless I'm very deliberate about it, but it's okay. I'm still waiting for the perfect, pressure sensitive pen and over-size iPad! It should be like a portable Cintiq, but hopefully not so pricey. (It is Apple, tho, so it'll be double, I bet.)

As a blog bonus, this is the drawing Evelyn was making while I was sketching her. She says "it's a happy face and some shapes." I should add that my drawing above is of Evelyn and some shapes. We are a pair, me and she.

After a lot of frustration, I decided to go back and read the Anime Studio manual, which -- although extremely helpful -- is a total drag. Why can't I just figure it out? This is the 4-seconds-long result of a few hours of tedious reading. I'm making some progress, but I've already forgotten how I got parts of this to work. I have to repeat things several times before it sticks.

I'm having a good time creating characters to animate, but I should spend less effort on that and more effort on learning how to make them move. I'm aiming for a short cartoon with annoying tunes I've made in GarageBand; that's another horrid little hobby I've taken to recently. I hope the effort comes out along the lines of Yellow Submarine in style, but with way shittier music.

Here are a couple of characters I've made for this; I've got a few more I'll post later, or maybe I should just wait until I get them working. 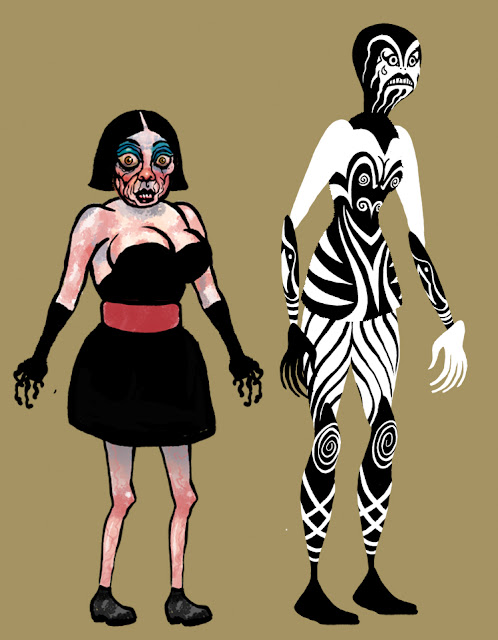 This illustration ran in the Bay Area News Group family of papers back on Thursday, June 25. I try to post here on the same day it prints, but I've been on staycation, cutting back on time spent sitting in front of the computer. It's good to (mostly) disconnect now and then.


The day I began work on this assignment I had forgotten to bring my drawing tablet with me. I had to find a pencil and draw on paper. I know it doesn't sound too tough but there was panic and despair -- I hardly ever get to work on paper anymore. It feels weird, but after a few minutes warming up, it wasn't so bad. I thumbnailed my basic idea, gathered reference and created the rough in a couple of hours with the help of my iPad camera and Photoshop. It was fun and didn't slow me down much at all. The rough was approved and I started on the final.


Jumping back a little bit, I should explain that the story was about how the NFL recruits volunteers in host cities (San Jose this up-coming season) to put on the big game. The NFL relies a great deal on the host community to help out with the huge influx of visitors and press and whatnot. You can read the story online here. It's by Patrick May, one of the writers I work with regularly, and he always does a great job telling the story.

I started to think that Kaepernick may not be the best person to put on the poster. I sent out an email explaining to the editors that maybe Tom Brady should be on there. He is the reigning Super Bowl MVP, immediately recognizable, and much more likely to find his way back to the Super Bowl than the 49ers QB, I'm sorry to say. I heard back from only one editor, and the response was "sounds good!"

So, I drew Tom Brady and put him on the poster and forged ahead on the rest of the illustration. 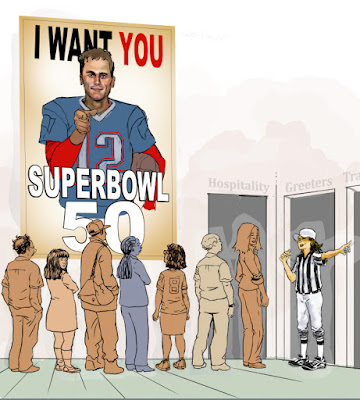 As I was heading toward the end zone, ready to spike the ball and kiss my bicep, the other editors began to reply to my email and the consensus was we should use Kaepernick instead of Brady, mostly due to the "deflate-gate" nonsense which was flaring up again at the time. If people saw Tom Brady on the front page they would think it was about cheating. Yeah, they were right. Darn. I had to add a bit more hustle to get it re-done.

Every time I put my feet up and think I've got it made, it turns out I'm brutally wrong. Oh, well.

Here is how it looked in the paper: 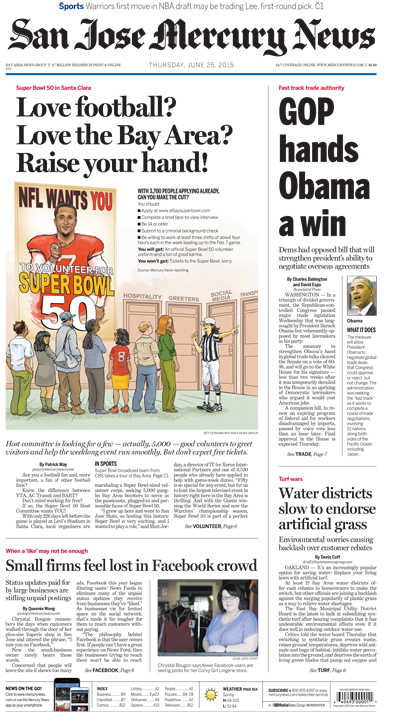