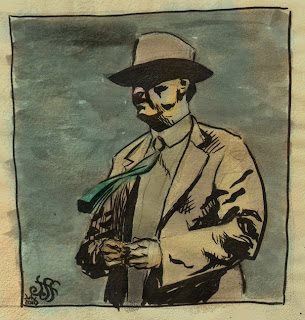 Here is a quick drawing of Frank Hamer, Texas Ranger, the man who tracked down and wiped out Bonnie and Clyde.

Created with pencil and brush on very cheap paper. Colored with absolutely no enthusiasm in photoshop.

Quick Study and a Doodle 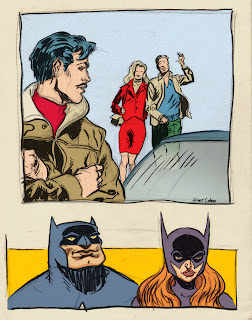 I'm totally in love with the work of Gene Colan. I've always been an admirer but I've recently been picking up some Daredevil and Tales of Suspense comics from the late 60s and early 70s out of the 1 and 2 dollar bins at the comic shop next to work; so I'm seeing a lot I've never seen before. He's absolutely brilliant. That word is used way too often, but it applies to Colan.

I've also snagged a bunch of his comics shopping online for about the same price. Classic comics and artwork for much less than the price of a new comic! I seriously can't afford new comics and I don't like them as much as I like the old stuff. I check out new comics at the library but they just don't appeal to me as much as the old books do.

Anyway, sometimes when I have ten minutes to spare before going to work I will do quick studies from photos or old comics. Most of them go to the trash, just because I don't get around to finishing them. The top panel I swiped from Colan a couple of weeks ago. Later, I freestyled the two characters below just to fill the spot. I was going to toss it out when I thought I'd color the thing and fill some space on the blog. 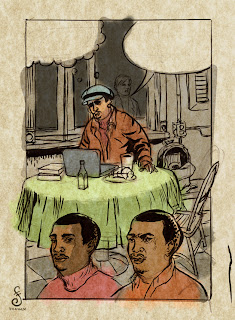 Last year I started writing/drawing a short story. Some portions I drew like a comic, some of it was written in sloppy longhand as a script/short story. I came close to finishing it, but I can't find a bunch of the pages! They must be around here somewhere.

I wonder if it might be too irritating to read one story presented in different formats. The beginning done in comics, the second part perhaps presented as a tv script with camera and stage directions included, and the final act written as though it were traditional prose fiction. Would the reader be able to follow the story over such an uneven surface?

In the moments since I finished the last sentence, I've thought of a few examples. Dang. For a moment I thought I had a brand new, innovative idea. Nah. I stole it. 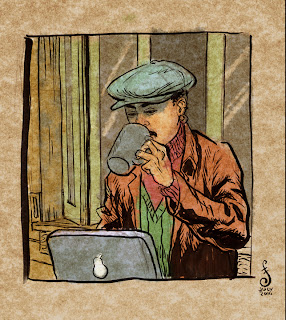 Getting back to the first paragraph, I've been doodling around while thinking about my crudely concocted short story and it's re-shaping in my head. The pages I drew in comics form are still pretty good-- I'll probably post them later-- but the characters don't fit the mental images I have of them now.

So, here I'm experimenting a little with one of the characters and trying a variation on a coloring technique that I've used before. 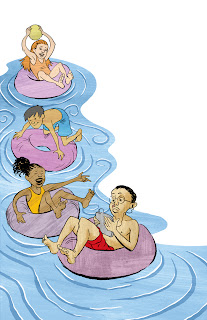 This illustration ran with a story about keeping the kids busy during summer. A lot of activities were covered and a broad topic can be a challenge for an illustration. In the end, I opted to focus on one image emblematic of the the story; it also is very representative of my best childhood summer memories.

During the summer my folks would drive me and my sister to a cousin's house and we would swim in a big pool for hours on end. It was a lazy, dreamy, wonderful time and I still think about floating in that pool, laying on the hot concrete, the smell of chlorine and the grass of the lawn. Ahhh. I'm there right now. 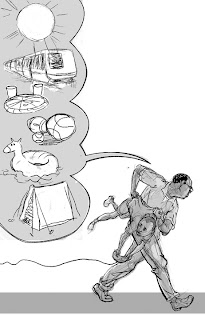 I had several ideas for this assignment before I zeroed in on the final presentation. In this rough, I addressed a few of the suggestions in the story, conjuring an iconography for them. I took a sort of aggressive tone with the main figures-- the father dragging the kid away from the video game, telling him to go outside and play, dammit. 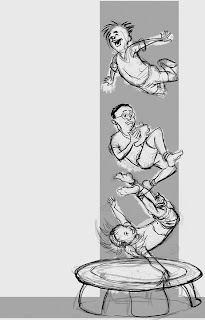 This was my first rough. The story pitch mentioned a summer activity including a trampoline. I think, personally, a horrible idea. Has there ever been a more obviously dangerous thing to purchase for your kids? Has anyone ever bounced on a trampoline and come away uninjured? Awful, awful idea. Great opportunity for a fun image, though!

Still needs work, of course, but I like this! 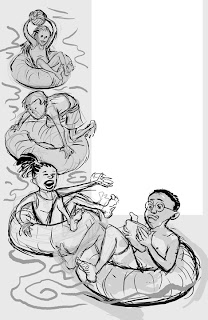 So, this is the development of the final. I stole the kid in the foreground from the trampoline rough. It seems obvious to me that an attempt to get kids out and away from the TV/computer/entertainment console is going to be near impossible in this, the age of the laptop/iPod/Pad. Certainly, one of the little tech-addicts is going to bring his tech-toys with him. I certainly would. I certainly do.

I'm working on that, by the way. I don't bring the ipod with me when I'm out and about. I kept getting it out to check if I could log on to wi-fi wherever I happened to be. I wouldn't DO anything; I just kept checking to see if I could see the internet. I hate being that dumb. 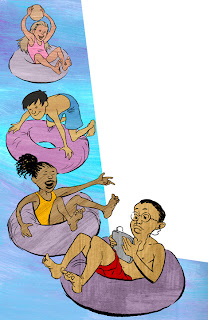 At this stage I've finalized the characters and begun experimenting with an approach to the coloring process. First, I colored with simple, flat color. Then, I took those simple colors and overlaid them on a scan of paper that had been painted with a broad brush.

By using a combination of adjustment layers, I applied the texture to those colors. I then replaced the flat colors with the spiffy new, textured colors. I've done this before but it always takes a while to get it to look pretty good. There are some colors that behave entirely differently with the adjustment layers so I have to go through the process of tweaking each color to get it to look right. That's why I tried to keep the coloring simple in the first place. 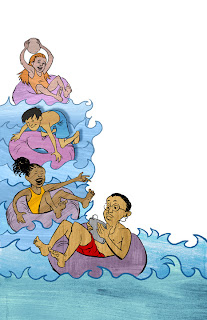 At this point, I had gone a little wild. I got carried away because I had extra time to work on this and I was having fun. I decided that I would give each kid his own wave to be floating on.

I was really getting into it. But, as I was sorting through nearly 80 individual layers -- adding more waves and more adjustment layers as I tried to get it to look better -- I glanced back at the original rough.

Geez, I thought, that looked pretty good. Now, it looks like the kids are in rough seas; I'm almost worried about them. There should be a life-guard swimming in there somewhere to put the audience at ease.

So, I ditched the nonsensical turbulent water shtick and went back to the original pool. It was quick work from there. 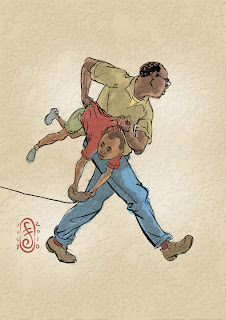 Bonus doodle: Here's the first drawing I did while brainstorming. I quickly colored it before bed the other night.
Everything done in Photoshop.

This ran in the paper a little while back; I can't take much credit for it, though.

The story was about the California Democratic party and a perceived lack of energy on their part heading into the election season; the bored Democrats. I'm all for donkey/elephant cartoons! A long-standing American tradition and one that I'm only too happy to carry on. I've done it MANY times.

This time, Chuck Todd-- King of the graphics department-- had a terrific little drawing mapping out this idea. Looked great! I tried to talk him into using his drawing, but he felt he didn't have the time to work it up properly, so I simply took his idea and drew it my way.

Easy stuff! Didn't even have to do any thinking!

Roughed out in real pencil and then scanned and buried beneath photoshop coloring. Of course, the story goes into the box there. I'll try to dig up a pdf of how it turned out and post it later.
at 7/08/2010 08:58:00 PM No comments:

The Worst Thing I've Ever Done? 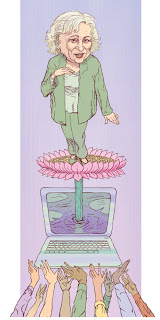 I almost feel pain when I look at this. It's taken me a while to confront this one, and writing about it has been very difficult. It's a traumatic experience I don't want to think about. But it's all about getting back on that horse, isn't it? So, here I go.

Sometimes you take a swing at something, like a fastball, and miss. Stee-rike. That's alright. Dig in, get ready for the next pitch.

Sometimes you swing at something -- like a pinata -- and you miss. Worse, you stagger when you swing, and flail three or four times amidst the screaming congregation. (Is that screaming or cheering? You can't tell. Keep swinging!) The pinata seems kind of soft when you club it. When you are finally knocked down and the blindfold is torn away by those who have subdued you, you do not see the cheerful sight you were anticipating. Instead there are bruises and welts and blood everywhere. Party over. No candy.

For this illustration I feel like I sorta clubbed the writer. What a crummy illo.

I work hard to make all of my work "good enough." I'm not saying that I strive for mediocrity, but there are times when things don't come together well. Maybe the concept isn't well-thought out, maybe the application of the idea isn't clear, maybe the subject doesn't inspire, maybe it's an off-day for drawing; an art slump. Still, the professional has to fight through those negatives and try to deliver a piece that is strong enough to stand on its own. At the very least you must try to hit close enough to the mark that nobody will be outraged. Well, I'm a little outraged by this one.

This was for a story about the resurgence of Betty White. All the elements that should buttress the story are there, aren't they? The crowd beneath, holding up the laptop, symbolizing the on-line campaign to persuade the producers of Saturday Night Live to have Betty White appear as host; the lotus flower, growing out of the laptop's screen, symbolizing re-birth of Betty White's popularity. Gag me. An awkward couple of concepts topped with a crummy caricature.

Does it even look like Betty White? At one point it did, but I think I managed to obliterate the resemblance as I went along.

As time was running out before deadline, I thought: "Geez, this looks lousy. I hope I can pull this thing together." I don't think I did. In desperation I pumped up the saturation of colors before I sent it; at least it would be colorful!