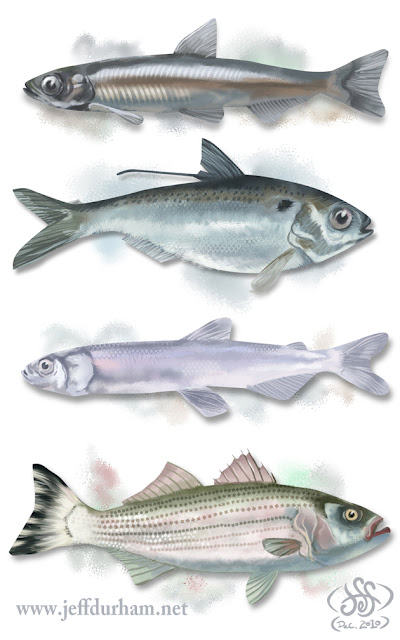 Today, at work, I am drawing fishes. They will be shrunk down to a very small size and placed in a graphic with charts that show the decline of their populations in the SF Bay Delta area. Here we have — from top to bottom — the delta smelt, the threadfin shad, the longfin smelt, and the striped bass. Drawn in photoshop, but not to scale. 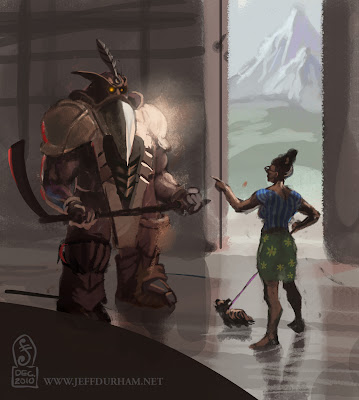 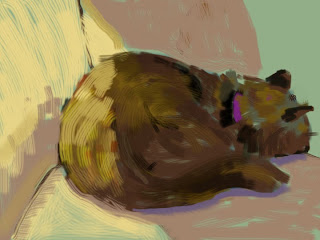 Here are a few samples of my latest doodles. Nothing finished yet, so these rugged fragments are today's only offering...

Super-busy weeks ahead, but I'll try to add a few to my 2010 post total. Dang. I was hoping for 100 posts this year. I think I might fall short by about fifty...

One Out of Three Ain't Bad

As I mentioned a few posts ago, I'm trying to get into the habit of practicing character design in my spare time. I enjoy drawing people, the human figure and faces, so the motivation isn't a problem. But I need to find the discipline to create designs that might be appealing to the fans and consumers of video games, cartoons or comics. The characters I come up with should fit into the mainstream, commercial sensibilities of the existing styles of characters that populate those mediums. Oops.

Obviously, without adult supervision, I have a hard time sticking to that. I like plain, quirky, odd characters. In a sci-fi/fantasy illustration, I would rather see a giant robot in battle with a frumpy, pale little old man than a giant robot in battle with a bronze, near-nude, ultra-fit, super-hot blonde amazon. I am, however, brutally aware I'm alone in this. I'm trying to get in line.

The lady on the right was a drawing that I started a few weeks ago. I blocked in her body shape and knew immediately that I was straying. Okay, I said to myself, finish this one and then do a hot-chick for a sword & sorcery video game. No joking around.

The lady in the middle is what happened when I focused. It was hard. The temptation to get silly was enormous. I almost turned her into a Playboy bunny style cartoon character -- with more wildly exaggerated proportions -- but I reigned that impulse in. Okay, we'll let the little green glasses stay, but that's it. Stop. She's done.

Then, the woman on the left erupted into that empty spot. Couldn't stop her. Poof! There she was. Phew. Much better. For some reason, painting conventionally beautiful people does not appeal to me.

Boris Vallejo has been one of my favorite fantasy artists since I was 10 years old. The background here is based on lingering impressions of his work. He paints fabulously beautiful people in fabulously beautiful fantasy settings, and I've always particularly admired the dreamy landscapes in the backgrounds of many of his works. He paints snow-capped mountains or craggy peaks in the distance, strange colors blending in a cloudy haze, and it all looks so lovely. I didn't quite get what I wanted here, but it was fun trying. Dang! That shapeless lump of rock behind them could easily have been re-worked into the head of a slain dragon! Boris would've caught that...

... and here's another holiday-related doodle. This was fast-paced fun and I had a good time making the drawing.

The business page needed a chart for this story -- that's pretty typical -- but the page designer asked me to do an illustration to go with the chart, if I could come up with something. No pressure, just "if you have the time."

She might have overheard me complaining about how little artwork I get to do on the job these days, and so she gently confronted me with a "put up or shut up" opportunity... but without the "shut up" part-- she's far too kind for that.

I did a quick rough of a hand holding a smartphone, with the intention of putting the chart on the screen. Not brilliant, but hey, it's drawing! My favorite part of work! The designer responded to my sketch with a design incorporating the hand as the main art. My vision was more along the lines of using it as secondary art, down at the bottom. I envisioned a large photo up top, with my drawing/chart down in a lower corner.

Then, for the first time, I noticed the headline was going to be "Shoppers' little helper." Ah-ha!  I just had slip Santa's sleeve over the naughtiness and it all came together. If you stay in pursuit of a solution it usually presents itself, but I always feel relieved and amazed when it happens.

Drawn and colored in Photoshop but I tried to make it look like pencil and sloppy watercolor or acrylic. All digital, tho.