This is a quick post on X-mas eve day; I'm too busy working and can't really get into it. And posting this later in the week is really missing the boat. The illustration ran on the front of today's Merc and all those other Bay Area Media News Group papers! The fine story by Patrick May can be read at this link!

Drawn and colored in Manga Studio, more color and some tweaks done in Photoshop. Here's how it looked on A1:

Hey! Found this the other day. It is my very first op-ed illustration, done for the Oakland Tribune back in 2001. I believe the story was about the growth of Texas in relation to California at the time; population, business opportunities, some tech companies moving for tax reasons, etc. 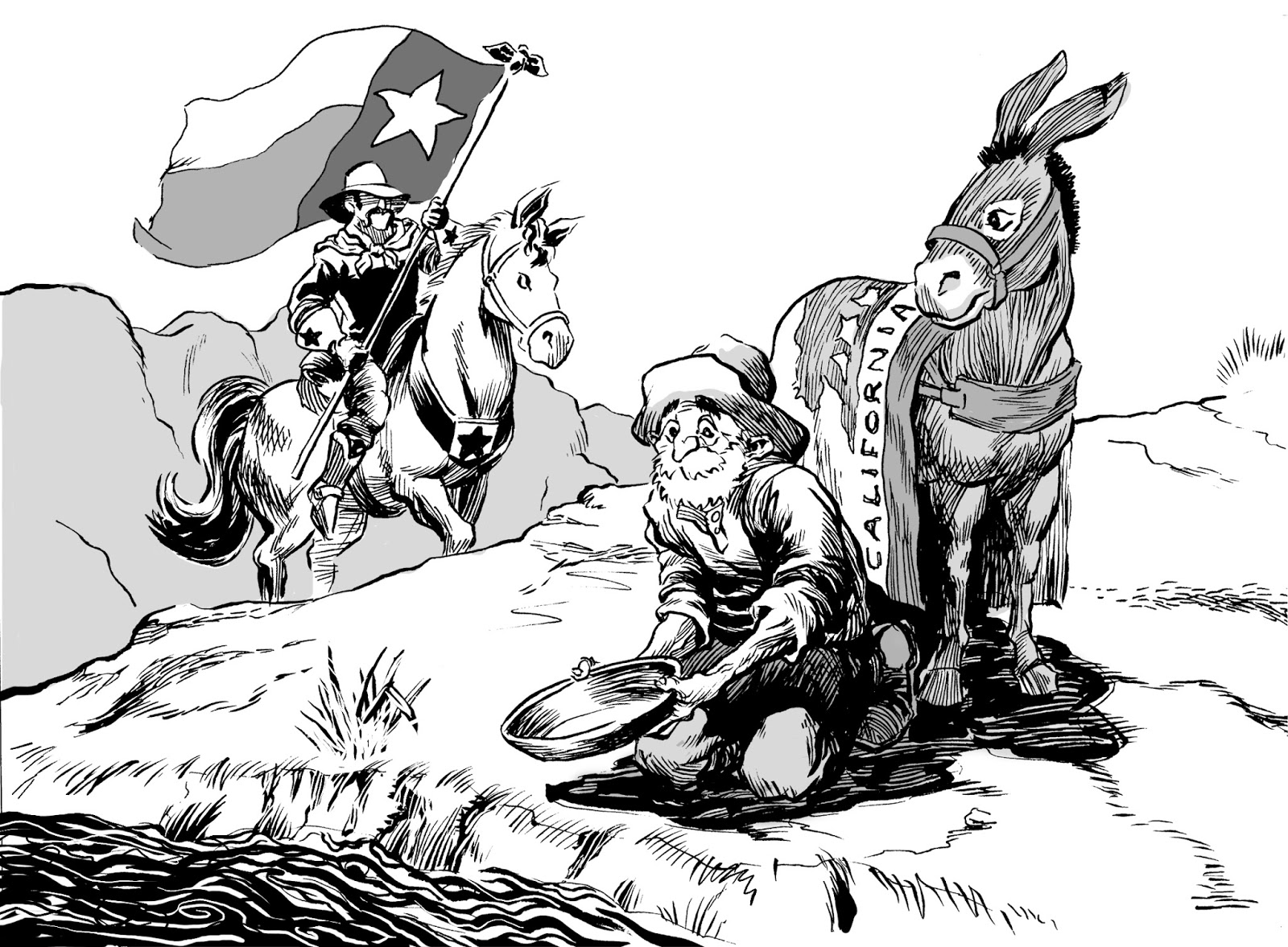 Drawn on actual paper, with pencil and pen. The white swirlies in the water were done in photoshop and are among my first lines drawn digitally. Weird how things have changed.

Working Under a Watchful Eye

Here is a quick post, late night, under the influence of nighttime cold medicine. I'm suffering from a terrible bug and I'm trying to reassemble myself for work tomorrow after a vacation decimated in large part by the illness that harries me now. But enough about me; here's one of my drawings done for work:


And here is a link to the excellent story written by Steve Johnson. It's a story that is somewhat disturbing and a trend that will continue.

I suppose my little cartoon makes light of the topic, but I tend to shrug and laugh when faced with the darker side of employer/employee relationships, and I won't say any more about it than that because, after reading the story, I'm certain they're listening! ;-P


As a laughing colleague (or two) pointed out to me, I have, again, drawn naked people for a front-page centerpiece. This is a disturbing trend that I do not approve of, mostly because it may betray some tacky thing about me that I was, and still am, unaware of. The doodle above was my first idea after reading the story. I submitted it to those in charge and -- much to my surprise -- it was approved and there was nothing to do but to do it.

I kid of course; unless you can tell me what's wrong with me.

Here's how it looked in the paper: 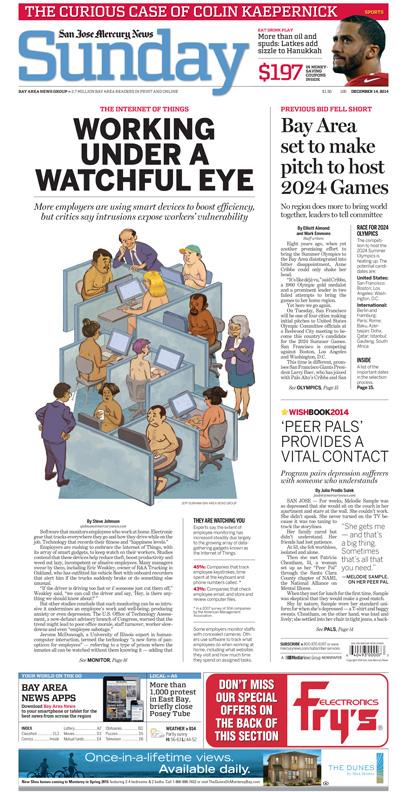 Drawn in MangaStudio 5 with a touch or two of Photoshop.

Hello! I hope this isn't getting tedious; here are more food drawings with plenty still to go. I think I'm losing interest in doing the (crappy) lettering job and arranging these all together for the blog. It was fun to draw but damn if this isn't turning into a chore!


My attitude problem may stem from having to tend to this while I'm on the first vacation I've been on in a very loooong time. I spent some days hanging out with visiting parents and it was wonderful; and just as that wound down I came under the heel of a wretched cold or flu or some gawdawful thing about which I will not go into detail since we are talking about food here.

I've been out of commission for a few days and I'm still feeling terrible, but vacation's end looms and I should get this together since "free time" will be back to a bare minimum shortly.

The chicharron thing above was a challenge to draw. It was a lot like my previous post's "chicarron of trout skin" which was not very good either. This one's quite a step up from that one, tho.

I really like the flat, graphic quality of the seaweeds in this post's second collection of images. I could have composed it a bit better, but that's my favorite, maybe of the whole batch posted before and yet to come -- so maybe I should just stop here and skip the rest!

So sick and lazy tonight. To be continued...

Two more sets of drawings from my motherlode of art created for Eat magazine, which appeared in the November 30th Sunday edition of the Bay Area News Group newspapers. An online version of the project has not yet appeared, but if and when it does, I'll provide a link. Great writing, great photography, and twenty-six drawings like these:


I wasn't sure how to approach this assignment when I started. My general instructions asked for drawings of the items served, and I thought I could do pencil style sketches, but the variety of textures and colors made that extremely difficult. It would be more effective to give each a painting-style treatment. The images above were my first two efforts.

On the left, I kept it loose and it just flowed. I was done in about ten minutes and pretty happy with it. The second one was a nightmare. You should see the actual thing; such a rough texture. I experimented with about three different approaches and this was the best of my attempts. I was not overjoyed with it and I meant to come back to it later, but time was short. It's not too bad, but I was really struggling with it.

Gosh, I also meant to come back and fix the cup on the top one. It took a while to paint all those little round things and I hastily filled in the container just to get the general shape right before moving on to the next one. It looks pretty wonky to me. Too late!

I should mention that for reference, reporter Daniel Jimenez took iphone pictures as he made his way through his meal. I was doubtful about how that would turn out, but his efforts were fabulous. He made it very easy for me, although he explained that he started eating a few things before remembering to take a picture, but I just left out the bite marks.

I drew a slew of food illustrations for a special magazine insert for the San Jose Mercury News Sunday paper, which appeared on doorsteps November 30.

Daring reporter Daniel Jimenez bravely went forth into a posh restaurant and ordered one of the most expensive meals in the Bay Area to judge for himself if it could possibly be worth it. Mr. Jimenez did what he had to do to get to the bottom of the story, which meant eating all kinds of stuff I would NEVER eat.


I created a lot of drawings for this piece and I will share them all, but it would be way too much labor to put them in one post right now; I'm a little full of Thanksgiving turkey and wondrously lumpy smashed 'taters, and can't sit upright in this chair for very long. I'll try to show the entire collection in four or five posts and then, ideally, put them in a single enormo-post when I’m done.

All of the art was drawn in photoshop, with a touch of MangaStudio here and there. I’ll talk more about the project and the drawings in the entries ahead.

As implied above, I’m not a foodie by any stretch -- I’d frenzy-pounce on the “flash-grilled lobster” for sure, yet flick the yuzu lime thing off my plate with a fork so as not to get any on my fingers -- but I enjoyed drawing all of these.