Here's the final for that retro-style cartoon illustration I've been sweating over at work. Although I wanted to go even farther with this-- more panels, more information-- I confess that I didn't think I'd get this far! (It's a big picture, so I've sliced it up into 3 smaller pieces below for easier viewing.)
...The newspaper job has been typically busy. For several weeks I've been drawing pieces of this assignment, off to the side, when I could. I was pessimistically expecting that I would have to resort to using only one or two of the individual cartoons as a final, but I was able to get it to this point. It's not perfect, but it's close to what I intended, so I'm okay with putting on a page. As a sequential piece, I feel it needs a few more beats between the first and second segments. I'm trying not to be so uptight. It won't kill me to let it go like this. 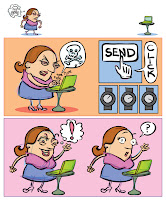 The art is... well, it's alright. I'm out of my comfort zone stylistically and therefore I don't have confidence in it. That doesn't bother me much. I'm trying something different, so I'm suffering from sprinkles of heightened interest and nervous excitement because of the novelty of it. I'm also feeling dread because it doesn't look like it's mine. That's normal.
...Standing back and considering it now-- a few days after I finished it-- I'm disappointed that it doesn't look as "retro" as I'd intended! I had hopes of creating a cartoon that looked like it fell out of Esquire in the 50s. I'm not getting that vibe. But it does look different from the usual stuff that falls out of my head, so I'll accept as a sign of the artist genuinely trying to grow.

...It's possible I failed because of my ability, but maybe I can also place some blame on the medium! It's drawn in illustrator with a touch of Photoshop. I don't know why I did that. I probably could have done the drawings in pencil, but I didn't. I created all the preparatory doodles on paper, and resorted to digital when it came time to push toward the final.
...Tonally, of course, it's me in "fluff mode." That's almost a given; it's what I specialize in at work. Maybe it's what I specialize in, period! Most of my art seems to come out with a cheesy smile, an annoying wink and a friendly (but slightly wimpy) handshake. There's still time to change, but I'd have to put some effort into it.
...Perhaps, someday, I will carefully craft an offensive, over-the-top, underground-style comic in order to make amends for all the cute things I've done at work. It would have to be about 1000 pages, though.

It's good to get a true comics illustration in the paper; hopefully the editors/publisher/audience won't be so startled and/or horrified by it that they forbid other such experiments.
...Several years ago I did a full-page, Christmas-related comic, and it was a lot of fun. Something about designing and drawing so many panels over such a large canvas was very satistfying. It takes a mind-set and a discipline completely different from the way I work most of the time.
...This one isn't full-page, but with a few tweaks it could be! THAT would be cool. Gosh, I think there's a little bit of Winsor McKay and George Herriman in me. Too bad that the Sunday Funnies are just about as dead as they are.

And on that cheerful note.

Epilogue: Looks like there's a link to Jessica Yadegaran's story! With some embarrassment, I notice I did not explain what the illustration is about; the link should clarify that! I'll try to pop back in and shore up the crumbly and crummy post later. Some blogs could definitely use an editor!
.
at 2/15/2010 12:08:00 PM 3 comments:

I Won't Be Posting This

This is Constance. She's... well, she is lovely in her way. I think she is the type that will charm you over time. The first impression, the first glance, it may not be a moment of spark and flame; but she does not reek of anything foul and those goosebumps you feel may be an indication of intolerance-- perhaps they are an indication of a flaw in your character.

I've been trying to find a simple, retro animation style for an upcoming illustration. It's hard to simplify. Mark Twain said something in reference to a long letter he had written; he apologized about not having the time to be brief. I find it takes much longer for me to do a simple cartoony sketch than you would think. It should take just a minute to draw one of these little guys, right? They take much longer than that and cause me discomfort. 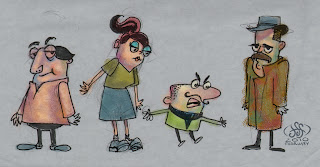 So, I've been creating these characters in hopes of getting better at them. I don't quite like the way they're coming out, but I'm making some progress. I still have to redraw them, and correct them in photoshop to make them decent to my discerning eye.

Nothing very interesting going on here; quick doodles done on scrap during work. 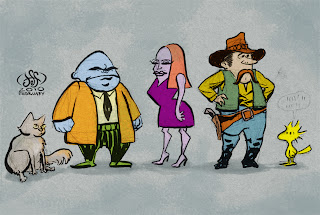 These recent posts are the acts of a desperate bloggist, trying to pass off thoughtless scribbles as art.

These are the futile rocking motions of a lapsed cartoonist trying to free his wheels from the soft sands of the Martian landscape. 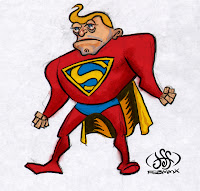 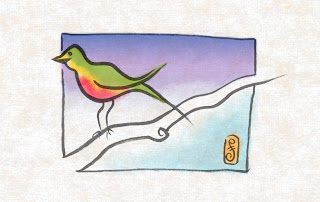