And The Winner Is...

Me! Because I got to spend some time at work drawing; such a luxury these days. Deliberately, I kept a serious tone for this illustration. For my artistic workload, merriment and silliness are what I indulge in the most. I'd like to say that's an attitude I use as I would a heavy stick to beat some sense into the world, but I'm afraid it's just me being me.

I often worry aloud that I don't have it in me to create anything that doesn't wear a foolish grin. Internally, I know I can be dignified, but I don't have much to offer as proof that it is so. I decided to treat this assignment differently. It was difficult. I can't describe the power of my drive to have fun with the most overweening ritual of our entertainment community. Such a fuss over millionaires giving each other praise and trophies for pretending to laugh or to cry in front of a camera. I respect the art and the craft, but it's embarrassing that we inflate their importance. But, I'm a silly newspaper cartoonist, and I digress...

I fell from my declared intention before my first pencil stroke; or, should I say, prior to the first stroke of the stylus against the tablet. I doodled the Jeff Bridges character and the Black Swan lady dancing together. Fun! But, what was I doing? Playing. No play this time, I decided. Work!

I did a quick thumbnail -- not handy right now; I'll post it later -- that looked just like the finished piece. (Strike that. There was no Zuckerberg character. He was added in last, at the request of the editor.) I thought I would design it as though it were a movie poster.

My first idea was to work in the pen and ink style of Charles Dana Gibson, or Montgomery Flagg. This is the experimental sketch of the Colin Firth character, referenced from one of the film's promotional photos. It's fun to work that way, but it didn't say "The Movies" to me. I don't think there's ever been a pen & ink movie poster.

There never will be, I'm guessing, unless someone makes a movie about Charles Dana Gibson or Montgomery Flagg. That's not likely, but I'd be happy to work on it if they need it done.


I decided to emulate the old gouache movie posters; a flatter, more graphic approach. This was my first take on that style. I liked the True Grit character, and the statue came out okay. Black Swan? She wasn't quite looking like the actress, but just as long as you get the eye makeup close to correct, it's such an iconic image that she won't be mistaken for anyone else.

Colin Firth? He wasn't doing so well. You can see, in desperation, I've modeled his face a bit, trying to wrest a recognizable likeness out that mess. I wasn't quite getting it. Finally, I ran the "cutout" filter on that drawing, and he sorta looked like him! I drew over the top of that to squash all traces of the filter and felt that I'd gotten close enough. Nifty trick, I thought. So, I also filtered the drawing of the statue. That didn't help so much. I retreated from that.

If you look at the final piece you can see that in comparison to the first Bridges sketch, Firth is much more rendered. He contrasted too much with Bridges and the statue. I added more detail to the statue and a touch more modeling to Jeff B and to Black Swan lady to ease them into the same general style. No way was I going to keep wrestling with Firth.

It was very satisfying to hold true to a respectful approach all the way through. Work turns entirely into play when I apply myself, and this didn't feel like work after I got two or thee hours into the chore. There was struggle and there was doubt, but there always is. That's part of the fun for me.

And it's fun to show that I can, indeed, create respectful, humorless, charmless art. Ha! 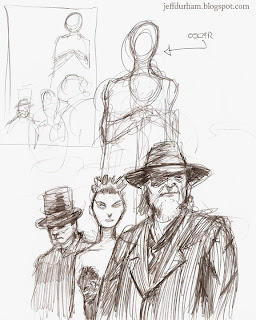 I wasn't much of a plant-person back in the late 90s, but when I saw this guy I was compelled to take up gardening, just so that I could be his friend. He wore Steve Martin bunny ears and greeted me with an enthusiastic "Hello there!" every time I saw him. He cheered me up. I thought so highly of him that I decided to paint his portrait.

He grew to about two feet tall and, along the way, he lost the bunny ears; but he did grow a few more arms and always offered breezy salutations to all who passed. For a couple of Christmases my wife and I decorated him and surrounded him with presents. He certainly beamed brightly in that role and was the epitome of Holiday cheer. Sadly, he passed away several years ago, but he is remembered with affection. Other failed plants have been forgotten.

While tossing out old artwork, this painting fell from a portfolio and landed face up. The shade of my departed cactus greeted me once again, the aura of his joyful optimism undiminished, even by his absence. Without thinking, I smiled and waved back.

I'm not going to toss this old painting out. I'm going to keep it and tack it to my wall. Hello there! Yeah. That'll be nice!

This illustration ran on Wednesday with a story about cakes for Presidents' Day, featuring recipes for cake by Martha W. and Mary Todd L. There's more in the story than that, but I don't quite know how to describe it. It was written by one of my pals, Jackie Burrell. Here's a link to it; it's interesting even if you're not a foodie! (Act quickly, links to the newspaper website dry up pretty quickly. Not my idea.)

The illustration printed pretty nicely! But, a confession. This was drawn entirely in photoshop, and on one of the layers I had added a subtle shadow to enhance the form of the area at the corner of George's mouth, so that it was more clear he had eaten one of those cherries. Also, there was a dab of pink frosting on his lips.

During the final merging of layers I seem to have deleted that stuff and not noticed. Dang! I was close! So close to my perfect illustration. Denied again. Ha! 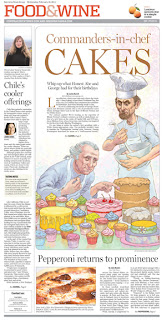 Here's how it appeared in print, as assembled by another pal, page designer Jennifer Schaefer. I've always been comfortable with the general tone and temperament of the Features department and this was one more in a long run of fun assignments.

Geez, looking at that pizza is really getting to me. Best part of the page, I'm thinking!

Looking ahead:
More to come in a couple of days. I found another batch of old doodles, and I might show a couple of the less embarrassing ones. I found some old journals and sketchbooks and paintings that I haven't seen in years; some of those may appear, too. Again, all according to my courage.

I'm going to try to write more posts covering the process of creating these illustrations. That's more work, but it is more fulfilling. And there seems to be more interest in that than a picture and my prattling on about it.

This illo would have been a good one for that. Maybe I'll re-visit this one. Hmmm.

I don't know, I might use up all the pastel pink, yellow and blue on the internet if I post this one again.

Welcome to post number 300! Also, the blog is 5 years old. Well, not exactly 5 years, but close enough that I'm going to pretend it is. I might be too busy to give it proper attention on the 19th, and the coincidence of the nice, round "300th post" and the 5 year anniversary is too tempting to keep from packaging them together.

And now that I've made it to this milestone, you know what? Not really a big deal. On the surface, I act surprised that I've been able to keep it going this long. "Who'd a thunk it?" you might hear me say. But it's become a natural part of what I do. I hope to do more of it and use it to build up my strength. I'm not the artist I want to be, yet; creating art is not how I make my living. It is part of my job but it is not the most important part of my job. I hope to change that. 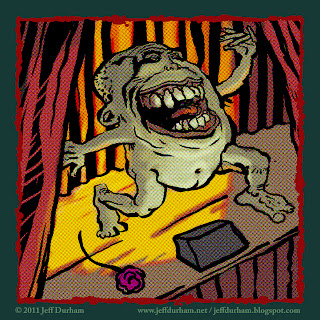 Before I began here, at Blogspot, I briefly posted an "art journal" on my website, but I was (still am) a feeble website wrangler. It was an awkward and doomed thing. I don't think anyone saw it. I found this community and it was simple enough to understand -- I decided to join and start again.

This nasty bit of imagery is the first thing I posted on my website blog, and I re-posted it when I restarted here 5 years ago. To paraphrase its introduction:

This is a simple, almost guileless doodle but, in retrospect, a very appropriate mascot for what I am doing. He might be reckoned by some as slightly hideous. But see how he steps on-stage with an almost brutal cheerfulness. Out he shuffles into the spotlight, entirely naked but comically unaware of how much is showing. And he performs with vigor! He seems not to understand that he may be perceived as unrefined, inappropriate-- it is only the sincerity and the dignity of the performance that matters to his silly artistic soul.

As far as we can tell, the ghastly fellow might not even have an audience. That rose? He may have put that there himself-- he does like to pretend. But with or without the cheers of the crowd, the murmurs of the mob, he goes on.

I'm working on a short comic that appears to be spinning off of the quick painting I posted on December 28.  It may remain a very short comic -- perhaps never going farther than two panels! -- but I have plans for a listless story fragment with no plot, offering absolutely no possible reader satisfaction. Stay tuned for that! 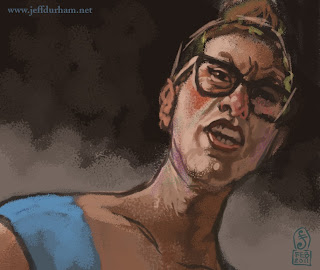 I kind of like the face here, and as I'm working on it I'm liking it less. So, I thought I'd take a picture and preserve the pleasant memory, so we can compare it with the awful finished version that I'll post in the future. 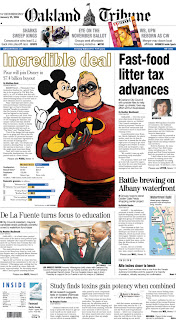 I stumbled across this today. It's a spot illustration from a few years ago. It was done it a RUSH!

The Pixar-meets-Disney news broke and I had just a couple of hours before deadline. I do remember I felt some stress because I hadn't drawn either of these characters before and I didn't have time to practice.

Well, I'm sure I did a Mickey or two when I was a tyke, but I hadn't drawn him in my adult life.

Zooming in on the pdf file, I can see that I drew it in pencil first, scanned it, then colored it. I think this was one of the last drawings I did for work on paper. I thought I'd stopped doing that by 2006. Wrong again.

It's kind of neat to see it. Totally forgot about it.