I've been trying to find the time to create some samples of comics pages. I used to write and draw stories, but for the past five years I've failed to make any progress. So, I sat myself down and sternly set the goal to create a comic page in a day. Three months later... I finally got there.

I haven't even been goofing around much. Really! I've been (almost) THAT busy. 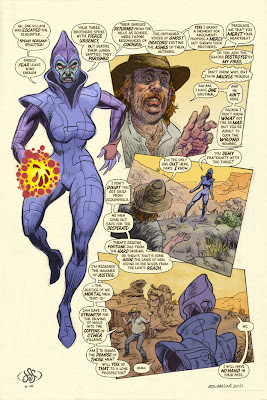 There's not a lot going on here-- just a few simple shots so that I didn't get hung up on creating detailed environment. There was no story in mind when I started it-- although now I have one. Obviously, I won't get around to making the whole thing unless mankind's life-expectancy suddenly grows by a decade or two. It's not that great anyway; just a sci-fi/western thing with no real plot.

I had a great time writing the dialogue in ten syllable bursts (not strict iambic pentameter, tho-- I just made it fit the syllable count.) It took a couple of days to do that, but that was because the story was growing and sorting itself out while I wrote-- I kept changing things and writing notes and making doodles for the rest of the story on a couple pieces of paper.

The writing took much longer than the picture-making. I'd guess there's about 7/8 hours drawing time here and about the same for coloring.

I stole the general layout from Steranko-- I've seen a couple of examples where he's done this: Full-length figure going top to bottom, and three panels falling down on the right.

Because it's bothering me so much, I'm compelled to write this: I am not a fan of word balloons done in vector and laid on the artwork after-the-fact. I dislike that a LOT. I much prefer to see the balloons drawn on the page, so I cringe and weep when I seen them all over my work. Is it resistance to change? I don't think so-- I hated it the first time I took notice of it and that animosity has not diminished. So, maybe it is resistance to change! Either way, it sure it quicker and easier to make adjustments on the fly. I see the appeal, but I despise the look.

I hope to do more pages for fun and portfolio, soon!