What is it about the anonymity people enjoy online that brings out the secret jerk in so many of us? If people behaved as badly in the real world I'm certain that I'd feel obliged to spend a good part of my day punching jerks in the nose. My arms would be tired from all the punching, and I'm not even a punching kind of guy.


The intent of this piece is to portray someone who is a very nice person but behaves like a (blank) on the internet, and this behavior manifests only because she (or he) thinks no one will ever know who is typing those awful things. Below are the doodles from the development process. My first idea was to have a character sitting in front of a computer wearing a villainous fright-mask of some kind. And yes, Richard Nixon came to mind, but there's no need to bring him into this.


I've been wanting to revisit a style I have experimented with in the past (here and here). This approach relies on shapes defining the drawing rather than lines, although I do lay down pencil strokes where they feel appropriate to me.

I have difficulty working quickly this way. The image looks much simpler than my other styles, but it takes me much longer. I haven't  practiced enough to be able to find a pleasing solution on the first go. Do I draw and then do shapes? Or should shapes be painted first and the line work drawn in after? Probably the latter, but I tend to draw lines before shapes when I'm cartooning.

After some stressful wrangling, the large image in the collage above appeared. I changed the figure's colors many times, drew over the top of it, erased and drew again, and so on. I wasn't happy with it. I was so involved with matching the style that I wasn't thinking about the basic message I should have been crafting.

Time to re-visit my idea. This is a nice person who turns evil once they they decide to type in the comment box. It occurred to me applying the color differently might be the way to clarify the story.

I went with a super soft pastel coloring scheme, keeping the colors cooler or less intense to heighten contrast with the red-devil mask. I gave up on sticking to the the flat-color look and let the character of a textured brush do what it wanted. It looks okay to me now.

When illustrating, don't be afraid to change your mind, especially if you haven't made up your mind in the first place.


The story, by the most excellent and entertaining writer Angela Hill, can be found here.

And here is what it looked like in the paper:

Maybe Spider-Man Can Save Me

Well, the weekend fell victim to chores and such, so my intentions of painting and drawing were crushed. It's late Sunday night and the gloom and stench of the killjoy commute-work-commute darkens my future.

Hey! Maybe a quick Spider-Man drawing can cheer me up.

I did this illustration for a story about what to take and what not to take when you go to college. The general idea I'm trying to get across is "you don't have to bring everything! Travel light." The story (here) is more helpful than that. 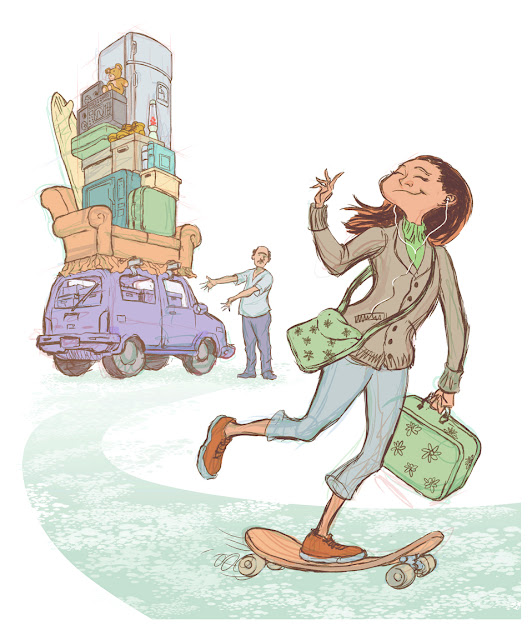 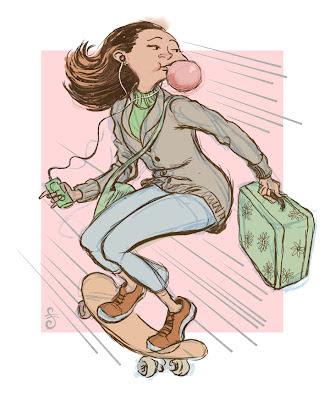 I was asked for spot illustrations to go on the inside pages. We could have cropped in on parts of the main art, repeating portions of the image and saving work, but I've never been fond of that treatment. As a member of the audience, I don't want to open the page and look at bits and pieces of something that I looked at on the front. 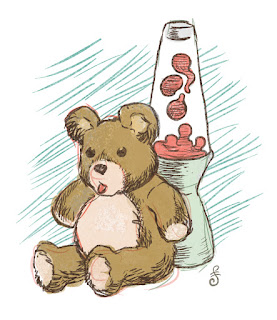 These were quick work for me and a lot of fun. I don't know if these are "my style" or not, they look different to me than my regular work, but I'm not sure what "my style" is.

I just scrolled down the page and I wonder how my work comes across. I see a variety of approaches with a similar flavor, but then I see things that look like they've been imported from another artist entirely.

Is this guy versatile or unfocused? Maybe both.


Here is how it looked in the paper: 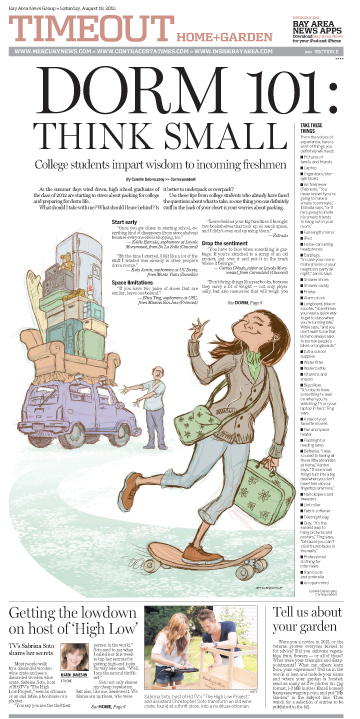 Here's an illustration I did for a graphic at work. It's a spotted gar.


The graphic featured two other fish, for which we had artwork, but there wasn't any usable art for this species. The other fish were painted, I believe, in gouache, and they are wonderful, classic wildlife illustrations.

I wanted to emulate that look, but there was a firm early evening deadline and a long department meeting to hurdle. And, since the image was destined to be reproduced at about 2 and a half inches wide in the paper, I attacked the illustration in my usual hasty manner. I'm happy to say that, squished down that small, my fish looked just like the other tiny fish!


Personal note: I've said this before, but I'm determined to try to improve my output here. I'll keep typing that promise and maybe I can shame myself into getting more done. I am in a horrible art-slump and I'm not sure what I can do about it at the moment. I'm finding almost zero time for personal work lately, and the commute-work-commute thing is really bumming me out. Ah, well. Less whining, more drawing is probably the answer. Chins-up!
at 8/15/2012 05:30:00 AM No comments:

This illustration accompanies a story about the problems arising around the imaginary economies which are a component of many online games. In some games the virtual currency can be exchanged for actual money or merchandise, so –– of course –– hackers and thieves are finding ways to steal gamers' make-believe money and trade it for real-world loot.

Wow. The shriveled, sleepy portion of my brain that recalls the pre-internet world thinks that's a weird thing to try to explain. What strange things the 21st century hath wrought!

I received the assignment on an already busy Thursday. There was a concept that the art director and page designer had tentatively pitched, but they weren't really enthusiastic about it. I started to flesh out that idea at the very end of my shift, but I paused and did the rough sketch below, on the left.

I've never played World of Warcraft but that's what I think of first when I hear "online games," so I pushed in that direction. "Almost there," I thought. But would anyone else see the connection?


I had a cookie, went into my thinking trance and solidified the drawing. Then, I put those health-bars over the characters' heads. DING! Whew. That's it.

I pitched the thumnail in an email before I went home and it was given the thumbs-up. When I arrived at work the next day, I only had about 5 or 6 hours to get it done, so I sprinted forward without straying much from the roughs. The drawing part was pretty swift but I explored a couple of different coloring approaches, which was fun and I'm glad I took the time. I like how it came out.

I didn't mean to make it so cute. I try to save that for my features illustrations, but it was crunch time and not wholly inappropriate.

Here is what it looked like in the paper: 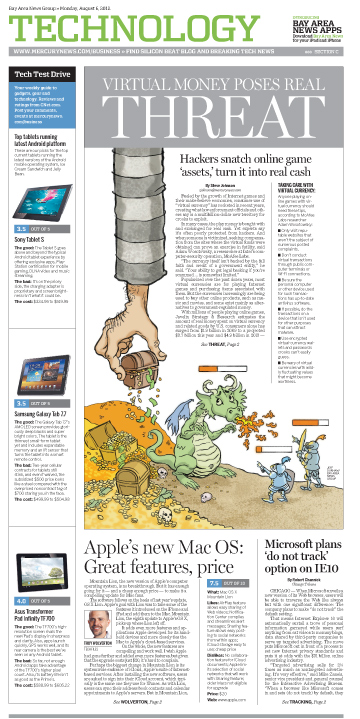 Here are two drawings done on the day my wife went into labor. I wriggled free of work and we passed the time resting and prepping for the trip to the hospital. Of course we were ready before the baby was ready.

I spent about half an hour sketching the bassinet and while I was drawing, my mind was time traveling. I daydreamed imaginary lives for my daughter and I had myriad visions of our lives together. It was a strange and wonderful reverie. I was almost surprised to find a drawing on the paper when I came back to reality. 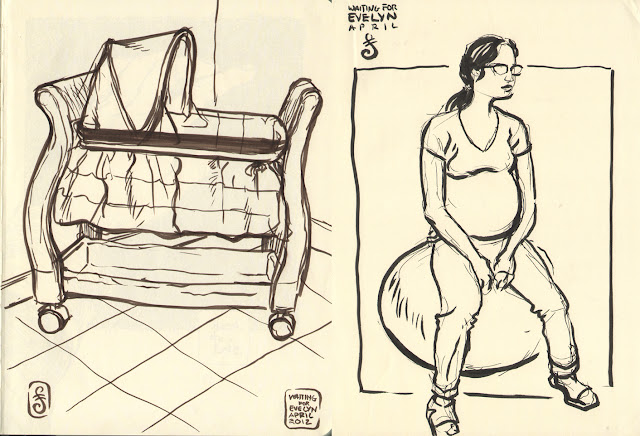 For the second drawing, my wife sat quietly with her eyes closed, coping with the contractions. She didn't move. Not long after I capped the pen and put the sketchbook down, we left.

The next day our wait was over; Evelyn arrived.