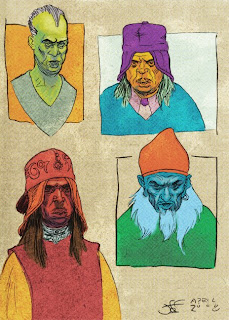 ...I'm beginning work on a short sci-fi comic, probably about 7 to 10 pages. I'm doing it because my interest in comics, and my interest in making comics, has perked up. I've been inspired by recent back-issue purchases and re-readings of comics I bought in the 80's-- some of those I've not looked at since I stuffed them into shoe boxes before 1990 rolled around.
...A particularly inspiring read is Moebius' "Airtight Garage" – the 1987 Epic edition. It's one of my bedside books and I've been looking at it regularly for the past few years. It's a very strange piece – the art is light and airy, and the story feels loose and improvisational. My impression is Moebius may not have known what was to happen in any given panel until he started drawing it. The story ambles around with a desultory grace, looking for a plot, with no urgency to find a logical end. It's different and lovely. 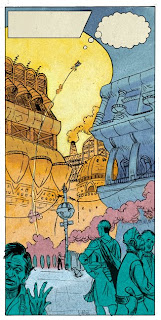 ...Also, I am a fan of the colors in "The Airtight Garage." I hate modern comic coloring-- hate it-- especially as practiced by the mainstream, which has spread like a gradient-tinged fungus to nearly all comics-- even reprints of old comics.
(I can go on for many long paragraphs about my dislike, and I just did; but I deleted all of it, leaving only this short aside. Over a decade of comic art absolutely ruined! So much lovely art defaced and vandalized by a trend in "style" that ... well, there I go again. I'll stop.)
...There are distinct and pleasantly peculiar color choices in "Airtight Garage," giving it a soft pastel flavor. It looks different from other comics of its time and is serenely elegant compared to contemporary efforts.
...These two studies are samples of my explorations and experiments as I start this project. I'm keeping the "Airtight Garage" in mind as I color; I'm also thinking about Elaine Lee and Kaluta's "Starstruck"-- another mid-80's book that expanded my expectations of comics.