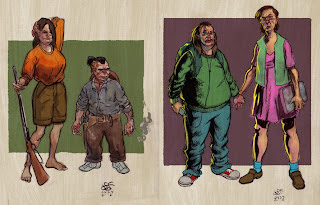 As I drew the figures on the left, I imagined they could be cartoon characters voiced by Bogart and Bacall, perhaps for some some strange animated feature. As I colored them I thought that they would be good in a Hillbilly-Western themed thing, but they're not quite Hillbilly enough-- I may fix that later.
...On the right is a happy nerdy couple. I drew them with nobody in particular in mind. Freestyle doodling.