A few years ago I did an illustration for the review of the final Star Wars movie. I thought I had blogged about it, but it was done before the birth of the blog. I found an archive of my website where I had written about it. I've edited that text and placed it below.


For this assignment, I was given a slab of page one real estate and told to fill it up with Star Wars imagery. "Just put a big Darth head at the top, above the fold." Yes, I can do that.


The writer of the review -- the great Barry Caine -- was a familiar face to the readers of our papers. He was featured prominently in our entertainment section on a regular basis and his smiling mug-shot was often used in promotional ads, so my use of him as a character in this package isn't as off-the-wall as it might seem to those of you from outside the area.

My intention was to have Barry-Wan standing with several of the movie's characters. I did drawings of Mace Windu, Chewbacca, Threepio, Obi-Wan and Padme... but they hit the cutting room floor. I was running out of time and getting them to fit together and look good in the space provided wasn't going to work out.

And I almost forgot about leaving room in the image for the story. Kind of important.

I had good fun. It was cool to see it so big on the front page of the paper. 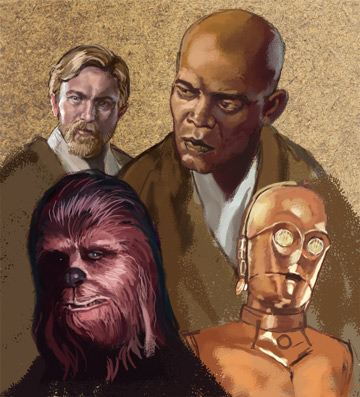 This is an arrangement of some the discarded doodles which has been rattling around in my screen-saver folder since 2005.

If I ever find the original files for either of these drawings I'll post 'em big and update the blog.