"...So everybody knows they love each other."

The character on the right began as an absent-minded doodle. It was a simple line drawing but he looked fun and quirky-cool to me, so I thought I'd render him a little bit and throw on some color, just for kicks. As I worked, my five-year-old daughter walked up and eyed him cautiously. "Is he... is he scary?" she asked.

I had to admit, he was creepy; but I explained in soothing tones that he was a good fellow, he just looked different. He probably had friends and a job, I said, and maybe even a girlfriend. With wary curiosity, she asked: "What does his girlfriend look like?" And thus my aimless doodle became a serious project with a built-in impatient audience fused with a potentially fussy art director.

I pondered the problem of a girlfriend for the creepy fellow, and – after a rough sketch and a few refinements – my daughter's tone changed; she approved of the pairing and thereafter regarded them both with convivial kindness. My daughter argued forcefully that the girlfriend should be all pink, every bit of her – horns to shoes! I suggested that pink skin could be enough pink, and I pointed out that the front of her dress kind of looked like a tulip. That was met with approval and did the trick!

As I worked on the finishing touches my daughter said to me, "Be sure to put a heart up in the air above them!"

Puzzled by this sudden introduction of more work, I growled and asked. "A heart? Up in the air? Why?"

"You have to put a heart above them so everybody knows they love each other!"

And just so you don't think I'm a completely horrible father, the finished drawing – the one I've shown to her – is below. 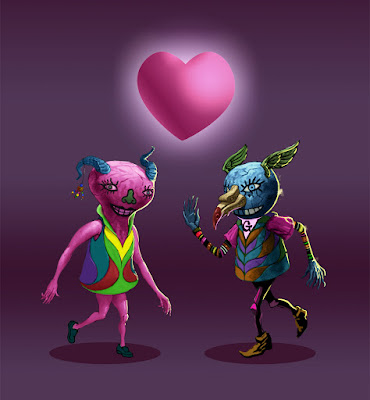