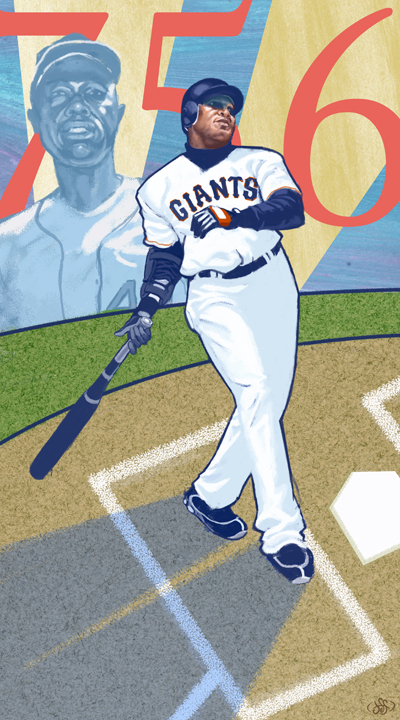 Months before Mr. Bonds surpassed Mr. Aaron's home run total, our graphics department started planning a page to commemorate the achievement. Without much thought toward a page layout-- which would need to incorporate stats & factoids-- I worked up this piece as a starting point. It's a cobbled together arrangement of my drawings of the two sluggers and a simple, quickie graphic environment meant to evoke the feel of a ballpark without being a realistic representation.

Treating it as pure illustration, I would have liked to have simplified the field and the figures even more, to have broken it down into an expressionistic/cubist piece along the lines of Gary Kelley's work. I didn't get around to pushing it because the final layout went in a different direction and, for the purpose of being an infographic, it became a much more sensible presentation.

So, I found this unused arrangement in my reject pile and I kind of like it, even though it is-- in many ways-- a useless thing and a bit of a failure.