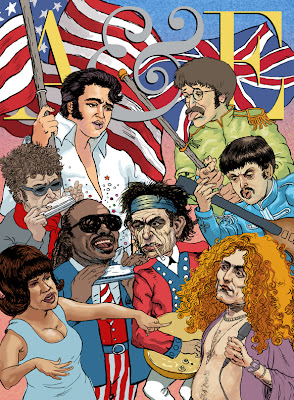 Here's a big, ugly illustration for the A&E cover to go with an article penned by Tony Hicks and Jim Harrington-- who's got the better Rock & Roll resume, U.S.A. or the U.K.? (Article here.)
...I figure it started here with Chuck Berry and Elvis, but has Rock & Roll ever gotten any better than the Beatles? Dylan might have one-upped them for a bit, but they definitely took that inspiration and responded with authority.
...I can't think of any band or artist on our side of the pond that tops Led Zep or the Stones and their respective, wrinkly old bodies of work. Hendrix might have gotten there-- and still he looms large-- but he stopped too soon.
...I like the American roots of rock and R&B-- Aretha, Little Richard, Buddy Holly, Bill Haley-- but I feel their artistic merits don't match up well against the late 60's early 70's crowd, not on grounds of talent or innovation, but the later acts have this appearance of sophistication, of doing something heavier than creating pop songs. However, that may be a case of buying into fraudulent aesthetic pretensions. Is "Stairway to Heaven" really better than "Maybelline?" It's harder to play on your guitar but it's probably not superior because of it: I say Chuck Berry trumps all!
...This discussion perhaps leads to another question: Has there been any great Rock & Roll since about 1974? I haven't heard anything, with a high level of popular influence, that I could make a confident case for. Going the alternative route, I think Tom Waits and Elvis Costello have created original and Olympian bodies of work, but I think one would be booed from the stage if one was to rank either of those artists above, or perhaps even among, the usual suspects.
...I confess to having given up listening to contemporary pop/rock music for 10-15 years now, therefore I won't claim to be tuned in to what has been good within recent memory, but when I visit the music I grew up loving, I mostly listen to the artists Tony and Jim discuss in the column.
...Today, for personal enjoyment, I listen to old jazz ('20s and '30s stuff mostly) and mp3's downloaded from online archives for late 19th/early 20th century cylinder records and 78's, and radio shows from the golden age. I'm not an expert in any of that-- most of the time I don't even know who I'm listening to-- but I know what I like and that's where I'm at now. Early. 20th. Century.
...Please send help.

Anyway.
...I had MUCH fun drawing this piece, done entirely in Photoshop.
...(Left side: Elvis, Dylan, Stevie Wonder, Aretha Franklin VS. Right side: John, Paul, Keith Richards and Robert Plant-- so if you want to leave a polite comment and you aren't sure who those people are, you can now-- without fear of offending-- say: "That's a very good Elvis you've done there.")
...(Top left!)

P.S. So, if I have to pick a winner, it's Chuck Berry and the USA! The problem is: He isn't one of the artists who made the list! Crap! If Chuck is out of the equation then the U.K. dominates. But, no Chuck, no rock! Chuck takes all comers and destroys them with the opening riff of "Johnny B. Goode." Take that, U.K.! 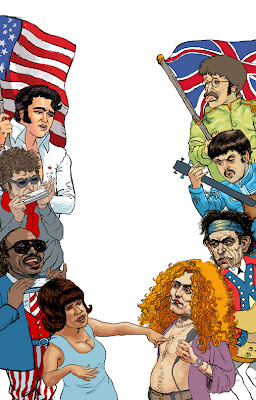