Here's my illustration that ran in the Bay Area News Group newspapers on Tuesday, Feb. 17, 2015.

The story touches on the recent release of files from Project Blue Book, and highlights a few reports from around the Bay Area. The article by intrepid reporter Matthias Gafni is also sprinkled with a brief history of the UFO in pop culture. The story is here and a companion story, focusing on local UFO reports, is at this link.


Being a fan of golden age sci-fi art, this topic afforded an opportunity to pretend I was creating art for "Amazing Stories" magazine. (That was one of my goals in life at age 10, and I'm starting to feel that way again. Do they still print that? Anyway...)

The "photo" on the lower left is a rearrangement of my first illustrative attempt for this assignment. One of the featured reports is about a hunter who was up in a tree and accosted from below by aliens. I thought about illustrating that particular incident as an entry point to the story, but it was decided later that it would be better to be less specific. Totally agree with that and I like this presentation better.

I found an old illustration of a flying saucer I created for work back in the early 2000s, and used it as a spring board for the illustration above.

Here is how this illustration looked in the paper: 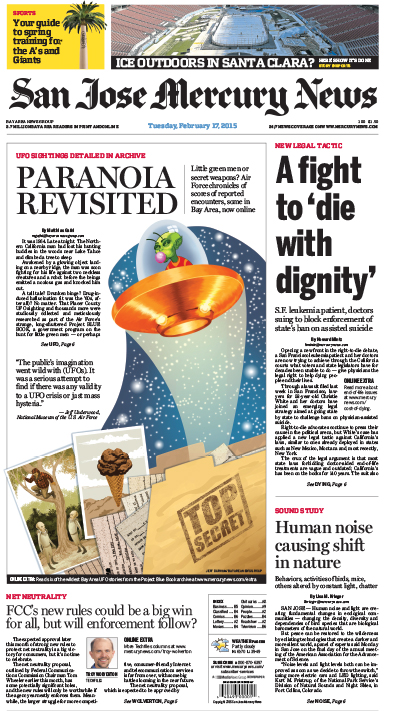 I enjoy watching UFO documentaries made in the and 70s, and I still follow UFO news, but I'm not a believer. I think it's fascinating how UFO culture has moved from strange subculture to mainstream mythology. It's a topic always gets a reaction from readers.

I'm not very surprised that the story at the link has attracted a long chain of comments but, of course, the louts and the boors drag it all down pretty quickly. As always.