This is Tuesday's entry after I finished coloring. I opted to give it a "crayon" look and I'm pretty happy with it. After doing a couple of test prints, though, I know that it will look awful in print without some major tweaking. It's far too colorful and saturated to print decently. I will "dry" it out a bit and probably knock the background to black. It won't look as nifty but it'll print better. Maybe. 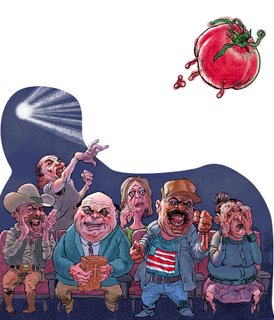 Side note: I see on-screen here that this looks likeit would be okay as far as reproduction, but the horrible truth of newspaper work is that it is printed by ancient presses on evil paper by a system that is not always compatible with the one I work with. This would be VERY dark and ugly.

I am slightly dissatisfied with the chemistry between the story and the art. I work with the writer all the time and his style is similar in tone to mine-- tending toward the humorous. Not that either of us don't have range, but it seems that, left to our own devices, we'd rather be smiling while we work than crying or sneering. This story, however, is pretty serious and I think I might have gone too far with the quirky/ugly look. My bad.

This happens from time to time and that's just part of the biz. We will have a meeting, the story will be pitched, the illustration idea will be approved and then writer and artist will go off to their respective corners and start working. The writer, during research and creation can discover something that wasn't expected and he will find his path steered off the charted course, and the same thing can happen to the art.

The writer and I were in conversation up until near the end and it sounded like we were really in sync but as I read the final draft and was adding the color... well, it felt a little off to me. Not horrible, but off. Still, it's a really good story and an okay illustration (I give myself a B to B-; probably B because I'm so easy to work with.)

I'll post the layout and final art on my website when I get all that together-- oh, probably this weekend or early next week.