First, I drew a box. Then, I sketched the guy on the right. I put a hat on him, and I dressed him in a fashion to quietly compliment the hat-- he struck me as a bloke who would frown upon a gaudy dissonance of appearance. He looked like he needed a girlfriend, so I made one that I thought he might like and tucked her under his arm. I'm not sure he's all that crazy about her. 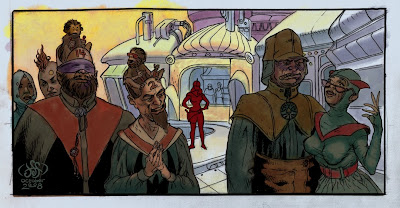 f
I put in the blind-folded guy over on the left and, by the time I finished drawing him, he was being driven by a little monkey. That was surprising! He looked lonely over there but I didn't think he'd be the type to attract the chicks. Instead, I gave him a friend who is like-minded, although I think #2 is more interested in the first fellow's girlfriend.
...The red figure in the background is the lady with the helmet from two previous posts (just scroll down a few, you can't miss her.) She wanted to be in the picture but she's been hamming it up, so I asked her to stand in the background.
...I roughed in the buildings, not really knowing what any of it is, but it didn't look bad to me at the time. I inked everything and I thought it was finished.
...The two people behind #14 poked their heads in. I shooed them away, but it was too late. I inked them too and proceeded to scan and color the whole shebang.
...I wonder what it all means?