These aren't very good but I've been on a roll lately and I'm desperate to keep it going. My record for most posts in a month is 13 and I may be able to beat my high-score if I stay on pace. So: A new drawing of a character I was slightly obsessed with a few years ago. On a lark, I drew a few pages of a comic featuring an old-lady-superhero battling a giant robot. There wasn't a point to it other than I was exploring whether or not I could manage to put together a comic at a decent pace and with a level of quality that I wasn't embarrassed by. It was fun to work on and it didn't look too bad, but it wasn't quite what I was hoping for. I still like her-- there's something about her that cracks me up.


Backup Feature:
These are little doodles I wouldn't even show (and I may pull them later if I decide they're just bad fan-art) but I was so tickled by that Ditko-style fist on Peter Parker I felt like I just had to show somebody. 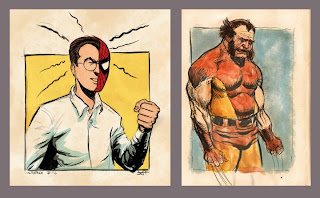 I recently read the Essential Wolverine collection and I was totally blown away by the John Buscema/Al Williamson art. I'll confess that the stories were pretty good but I never cared for Wolverine once he became a super-secret-agent-ninja guy. I thought he was cool when he was the mysterious, cigar-chomping, beer-drinking absolutely UGLY little psychopath who might turn on his own teammates. But as a Bogart-style, world-weary good-guy hero? Puh-lease; that is NOT the guy who ripped up those guards in the Hellfire Club. (I think my age is showing.)
...I did a quick sketch to see what he'd look like in my version of the X-men and, yeah, that's about right, but he'd be a little uglier. Also, I meant to draw a cigar in his mouth but forgot about it, so that why it looks like he has a weird grimace on his face.