I'm going to design the Preview cover at work next week-- that's the weekly entertainment/movie/TV tabloid. Cover story: that Wolverine movie. Not too sure what I'm going to do, but while I thought about it I doodled up a study referencing one of the promo photos. 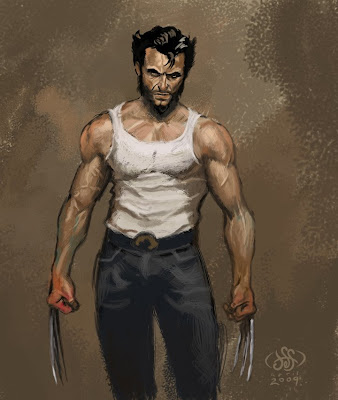 I set out to do a quick study, pretending I was Frazetta, but I may have taken the rendering too far in places and it's starting to look a little too precious. I stopped before I made it worse.

It would be cool to do a faux movie poster along these lines, but there won't be time for that. I'm leaning toward not using this for the cover, because it doesn't really add anything to the original photo (and I'm embarrassed by that poorly done arm) but I thought it might be okay for show-and-tell here. I haven't painted anything in a long time, so it was fun.

I really want to put him in that brown and orange costume that John Byrne designed, mask and all; and then cover his arms, shoulders and chest with the copius body hair he had back in the day.

Hopefully, someday, they'll make a cgi X-Men movie with the characters designed to look exactly like the Byrne and Austin X-Men. The comic geek in me would think that would be ultimate super-hero movie bliss.