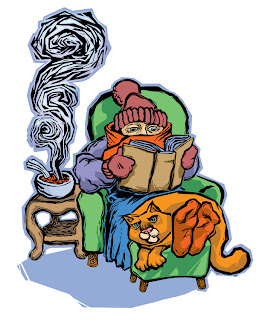 I thought I had posted this before, but I searched the blog archives and didn't see it.

It's not that great, but I'm almost positive this was the very first illustration I did as an assignment for the newspaper. That would be January of 2001. I was just a kid. Well, a kid of 30-something.

I don't think this is the final image that went to print. I remember the book spine had the word "Dante" on it; could be wrong about that, though.

This was drawn on paper, scanned, and then "inked" in photoshop. I used a wood-cut style approach, which was something I did when using a mouse instead of a pressure-sensitive tablet.

I had to bring my own tablet to work in the early years, as it wasn't considered a necessary tool. Gah. Imagine that! Cheapest ones were about 300 bucks back then, tho. That's an expensive bit of equipment for a new-hire cartoonist.
at 7/24/2011 10:33:00 AM