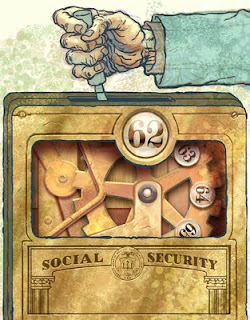 This is my pinch-hit for a co-worker who was diverted from an illustration assignment at the last moment. He had an idea and a thumbnail, so I took it and executed it in my own way.

I only had a few hours to get it done and I was improvising as I went, without much room to go back and fix things. About half way through I felt it was totally out of control and fear was in my heart.

I didn't like it and I truly felt it was going to be a cataclysmic failure; a bad conflict of different visual styles stuffed into one illustration. But on I plodded. As the deadline stood clearly in view I spattered some texture on it and put a light greenish glaze over the whole thing to try to unify it.

It's weird, but about 10 seconds before I was done with it I had a complete change of heart and decided that liked it. Whew. That was close.