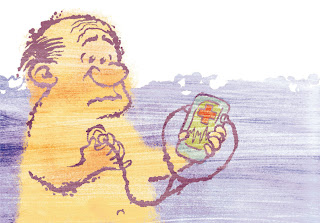 Here is a wonky illustration done for a story about getting yourself all bent out of shape by going online and trying to figure out what is wrong with you. Certainly you will imagine the worst, whether 'tis true or t'ain't.

It looks like a quick illustration, and it was, but not as quick as you might think. It took a few hours, I'm ashamed to say.

I tried several approaches, but this was my first idea and a direct descendant of my very first thumbnail. As I pressed forward, I looked backward and decided it wasn't going to get much better than this.

Deadline was looming, I was busy with other work and time was really tight, so I finished it up as quick as I could. . .  and then the story was held for a fortnight or so. That's the way it goes!